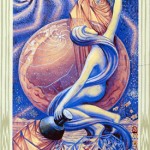 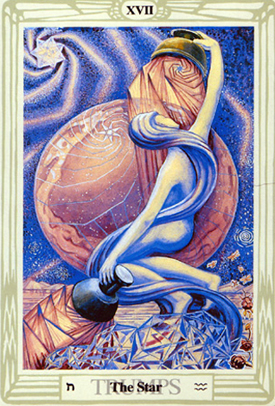 The Star — the tarot card representing Aquarius. This version was painted by Lady Frieda Harris, with some help from Aleister Crowley.

Of its own, this has been an interesting pattern to track. For reasons I have not been able to figure out, the solar cycle and the lunar cycle have been hugging one another. If someone understands the astronomy of this, please do explain it in the comments area.

Translating that into time seconds, the New Moon happens at 6:47:14 pm EST (23:47:14 UTC) Wednesday. The Moon ingresses Pisces 10 seconds later. The Sun ingresses Pisces two and a half minutes later, at 23:49:47. I guess you would have to have a certain kind of sense of humor to appreciate that, but it’s hilarious. I have never seen anything like this and it would be fun if someone would take a trip in Solar Fire (the best astrology research program) and figure out the last time anything like this happened.

It’s fair to say the New Moon takes place in both Aquarius and in Pisces. By the time the Sun arrives in Pisces, the Moon is just two arc minutes ahead of the Sun, still well within the closest conjunction recognized by astrology — 11 arc minutes or closer (referenced in the classical literature as ‘cazimi’, a conjunction of about one-fifth of a degree or less).

And what have we here? What is this telling us? Well, the implication is a seamless union of Aquarius and Pisces, two signs that benefit from one another’s presence and mutual awareness. That is handy — Aquarius is the sign of the water bearer and Pisces is the sign of water. Pisces has the vessel that it needs and Aquarius has the water to fill that vessel. This is an image of fulfillment, of contact, of completion.

Nessus, one of the earliest-known centaur planets, is currently in the first degree of Pisces, and will be welcoming the New Moon. This is a way of saying that you can create anything you want, and a reminder to take responsibility for what you create.

This is a spectacular, if subtle, welcome to the Sun’s transit through the last sign of the solar year, with the Moon and Sun arriving simultaneously at what is in truth both the headwaters and the delta of the zodiac. The year ends on an equally stunning note — with a total solar eclipse in the last degree of Pisces, on March 20. But we have some time before we get there. Granted, the Sun never seems to be in Pisces for long enough, though for the past few weeks we have had Venus and Mars opening up the energy, joining Neptune and Chiron.

Yet we also have an equally impressive message about Aquarius. I will leave you with something called the Sabian symbol for the last degree Aquarius, one of my favorites of the lot. The Sabians are a set of degree symbols wherein each degree gets a picture or a little story. They make up a mysterious little world, which came into being around 1930 and is an important foundation for modern astrology.

Here is the symbol for 30 Aquarius: Deeply rooted in the past of a very ancient culture, a spiritual brotherhood in which many individual minds are merged into the glowing light of a unanimous consciousness is revealed to one who has emerged successfully from his or her metamorphosis.

21 thoughts on “A New Moon in Aquarius and Pisces”