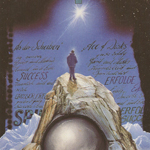 In this week’s reading, featuring The Tower, the Ten of Cups, and the Ace of Disks, Sarah Taylor writes: “I know a lot of people fear The Tower. I do not any longer. I have lived through enough Tower moments, where I am aware of its work in my life, to know that, although uncompromising when it makes its appearance, that refusal to compromise takes nothing that still feeds my Soul with life-blood.”

What seems clear in this week’s reading is that there has been a clearing.

The Tower in the near-past position, at left, forms the foundation to this particular part of your ongoing story — and I use the word “foundation” advisedly: The Tower is nothing less than the archetype that sweeps clean right down to your foundations. 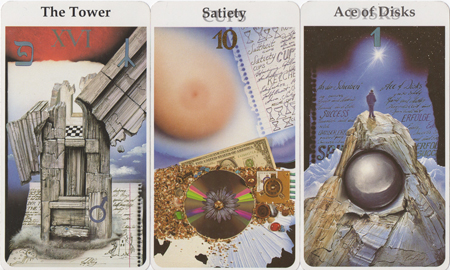 The Tower, Ten of Cups, Ace of Disks from The Röhrig Tarot deck, created by Carl-W. Röhrig. Click on the image for a larger version.

Its Martian energy comes at the culmination of a build-up of false dreams and edifices that reach ridiculous heights. It is at this point that the illusion can no longer sustain itself.

Everything that lacked grounding, that lacked a bondedness to integrity, is torn down and away, leaving a dust cloud as the earth tremors in the after-shocks.

I know a lot of people fear The Tower. I do not any longer. I have lived through enough Tower moments, where I am aware of its work in my life, to know that, although uncompromising when it makes its appearance, that refusal to compromise takes nothing that still feeds my Soul with life-blood.

More than that: it paves the way for an increased flow of life-blood because obstacles have been removed. The Star, which comes after The Tower, is indicative of this re-connection to inspiration.

So where does that bring you now? Into the realm of the Ten of Cups. Cups are associated with water, and emotions — our own watery natures. But here, there is a closer correlation with The Tower than there would be with any of the other Cups cards. Because we are dealing with the Ten, we have another culmination. The Tower is bringing us into a shift, away from the Ten and into the final card, the Ace of Disks.

But first, the Ten.

The Ten of Cups’ title of “Satiety” is apt: to be sated is to be filled up. The process of filling may be pleasant — the breast as the largest element in the card attests to that possibility — but the implied message is clear: it is time to move on. Acknowledge what you have received; acknowledge that you have fed from something to your heart’s content. And now it is time to take what that has given you, and shift it.

Let’s define “heart’s content” a little, though. Because what you feed on will not always feel like it is either nourishing or pleasant. But it will have been what you needed — even if what you needed was something that told you that you have had enough — or, “Enough!” You might be sated; you might have “had it up to here.”

Tens are the point of release that indicate you have reached ‘tarot suit saturation point’. With the Ten of Cups, you no longer need to suckle from a particular emotional breast. You no longer need emotional nourishment from a particular source — a source that possibly has its roots way back when — and that the time is getting close to overdue for you to unlatch and release yourself.

Is this a childlike habit you are facing — a form of solace that, while comforting, keeps you in the same place in your life?

Is this a desire to reach for something, or someone, that you identify as nurturer — when, in fact, the moment has arrived when you are able to spread your wings and offer that to yourself and to others?

What comes through strongly in this reading is that Mars is responsible for moving you through that period of clearing, and a current time of integration of your own inner child, and towards a possibility that is grounded in something more in keeping with who you are, and infinitely more precious: look at how the compact disk of the Ten becomes the Ace of Disks in the final card.

The Ace of Disks seems to be hewn from hematite, named after the Greek word for “blood” — the life-blood that starts to flow as a result of The Tower. You are standing on a foundation — one with aligned integrity — of your own, inner, creative life-blood. It is the kind of life-blood that brings things into form.

You are one powerful mutha right now! Yes, that’s right: you are mother. You are mothering yourself. You are mothering your own material, tangible life into existence. One that has an integrity that you can feel simply by standing where you are and sinking into the core of what supports you, and aspiring to your own light — the one that feels simultaneously distant and yet so utterly connected to you.

Time to start building. Not rebuilding. Building. Something new. Something you. Reach for it, because it is there. It wants to meet you halfway. It is only by putting your hand up to the mirror that the mirror reaches back to you.

Astrology/Elemental correspondences: The Tower (Mars), Ten of Cups (Mars in Pisces), Ace of Disks (the pure, infinite potential of earth)