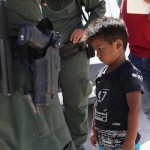 Today’s Sun-Chiron square describes, in part, the collective healing needed to our inner masculine/yang sides. In that context, Amanda Painter looks at the chart for the July 2 Cancer New Moon and solar eclipse, and connects it to the daily assaults on our empathy and capacity to care that are being made by the daily news — particularly the treatment of children at the U.S. border.

Eric wrote at the beginning of the week about today’s Sun-Chiron square, and the collective healing needed to our inner masculine/yang sides. Then I looked at the chart for the July 2 Cancer New Moon and solar eclipse, and started thinking about the daily assaults on our empathy and capacity to care that are being made by the daily news. 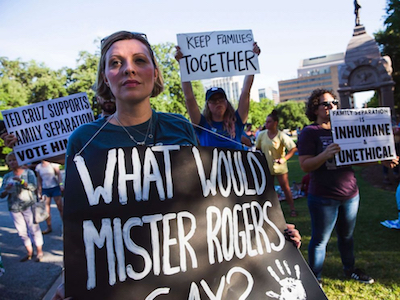 Demonstrators gather to protest against the separation of immigrant families at the border in Austin, Texas, on June 14, 2018. A year later, things are no better. Photo by Amanda Voisard / Statesman.com via AP

And it all cascaded together in my perception of what amounts to the ongoing psychological and physical torture of immigrant children separated from their families and being held in detention at the U.S. border. I’ll get to the astrology in a moment.

I’ve been seeing a lot about this in my Facebook feed and my email inbox. The strongest recurring theme, however, is an overwhelming sense of paralysis: not knowing what we can do; wondering ‘why isn’t anyone organizing a mass protest?'; asking ‘who is organizing something I can join with?'; feeling completely at a loss regarding which actions will help and which might actually make things worse.

Do we call on lawmakers to give Immigration and Customs Enforcement (ICE) more money to care for these children properly (or is it CBP — Customs and Border Protection)? Or do we insist on their funding being cut so the detention program must stop? Do we give to the nonprofit lawyers’ groups who have been working on these kids’ cases for months now, or do we organize a massive bus caravan? What would a caravan of protesters do there, anyway: stage a sit-in, or try to storm the facility and risk getting shot?

Last week, the Associated Press reported that at least 250 migrant infants, children and teenagers have been locked up for nearly a month without adequate food, water or sanitation at a Border Patrol station in Clint, Texas, near the city of El Paso.

As Democracy Now’s Amy Goodman reported on Monday, “One local lawyer said a sick 2-year-old boy was being treated by three girls between the ages of 10 and 15, because no one else was helping him. Attorney Holly Cooper said, quote, ‘In my 22 years of doing visits with children in detention I have never heard of this level of inhumanity.'”

I highly recommend reading the transcript at that link of Goodman’s interview with Warren Binford, a lawyer who interviewed children detained at the Clint, Texas, facility, and a law professor at Willamette University. We need to know what is happening — in our names, with our tax dollars.

The AP report came the same week the Trump administration argued in federal court that the government is not required to provide toothbrushes, soap or beds to children detained at the border, and as other reports found similarly squalid conditions at a number of immigration jails. Think about that: claiming no responsibility to provide soap or beds to children in your official care.

For a hot minute, it looked like the shock of the reports was achieving some action: later on Monday, around 300 children were removed from the Clint, Texas, facility. Yet by Wednesday, as I was writing this, the Department of Homeland Security stated it had moved 100 migrant children back to that same facility, claiming it is “no longer overcrowded.”

The overcrowding is only part of the problem. There’s also how closed off from inspection and scrutiny most of these detention centers are. There’s the fact that many children being detained may in fact have adult family members in the U.S., but they do not have their contact information. And as Human Rights Watch senior researcher Clara Long explained on Democracy Now!, many of these children are either pre-verbal toddlers or have no idea that phone calls to their family members might even be possible.

As Long and Nicole Austin-Hillery, Executive Director of the US program at Human Rights Watch, explained in an Op-Ed piece on CNN Tuesday, “Children should spend no more than a few hours in short-term border jails to be processed and US-law limits their detention under typical circumstances to 72 hours.” 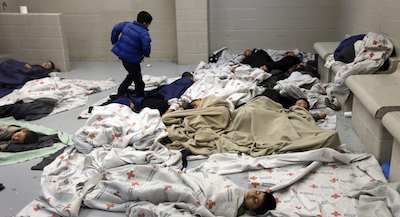 McAllen, Texas, Detention Center for Immigrant Children. Just think: this is not even the facility in Clint, TX, being described by Human Rights Watch. Photo by the Center for Border Protection.

Instead, the Trump administration has slowed reunification, using the children as pawns to draw out their so-called illegal immigrant family members for arrest and deportation. Some children are being detained in overcrowded cells for weeks at a time — with no sense of when they might see their families, let alone regular baths, toothbrushes, changes of clothes or properly nutritious food. The sickest get quarantined, maybe. The less sick get cared for by children barely any older than they are.

Ten- and 14-year-old kids with no relation to these toddlers are showing a greater sense of responsibility, empathy, and basic human duty than the president of the U.S. I suspect most of us would do the same thing as these detained teens if we were in the same position: we would take care of those around us who need our care, without question or hesitation. But we’re not in the detention cells with them. We’re hundreds and thousands of miles away, reading and listening and clicking on the internet. Some people are at least taking the steps of finding out which nonprofits to donate money to, or calling their Senators and Representatives. Yet it does not feel like enough.

Long and Austin-Hillery write, “Congress should take action — not by approving more money for detention — but by requiring immigration agencies to cease separating children from family members unless that’s in the interest of the child, release and reunify children as soon as possible and cease using them as bait to arrest family members.”

In other words, I see this issue as calling forth the kind of caring-warrior we could associate with the Sun in Cancer — the sign of mothers and mothering, of home, of caring for others — square Chiron in Aries: the raiser of awareness and healer in the sign of the warrior Mars, the sign of ‘I am’. If we identify as people who care, how do we express that meaningfully?

As Eric once wrote of Chiron years ago, “We know Chiron is active in our charts when we strive to make difficulty meaningful, when we seek healing rather than escape, and when we strive for awareness when in the past we desired to go to sleep.”

It is so easy to hear about such injustice to children and feel the horror, but then retreat from the pain, guilt and sense of helplessness it evokes. There are so, so many ways to return to sleep in our current moment and culture.

And yet, here comes this New Moon in Cancer, which also happens to be a total solar eclipse. Serennu.com lists the New Moon as exact at 3:16 pm EDT / 19:16:06 UTC on July 2, with the eclipse peaking a little bit after that. The Sun and Moon conjoin at 11 degrees of Cancer. (The eclipse will be visible from small parts of Chile and Argentina just before sunset. Some regions in the Pacific and in South America, including locations in Ecuador, Brazil, Uruguay, and Paraguay will see a partial solar eclipse, if weather permits.)

It’s the minor planets aligned with this event that connected it for me to the idea of realigning with how to care actively for these children who have been separated from family and detained at the U.S. border. Just one degree from the New Moon and eclipse is Kronos — one of the hypothetical Uranian points. I’ve seen it described as a kind of “super-Saturn,” related to the highest authorities, laws, governmental leaders and “the father.” 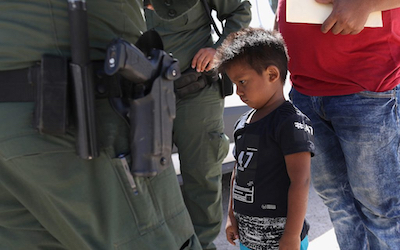 A boy from Honduras is shown being taken into custody by US Border Patrol agents near the US-Mexico Border near Mission, Texas, June 12, 2018. Photo by John Moore

Remember that in myth, Kronos devoured his children in an effort to subvert a prophecy that one of them would overthrow him. I don’t think we have to look far for a modern image of a high-office authority figure symbolically devouring children in a desperate grab for power.

Opposite the Sun, Moon and Kronos, in Capricorn, are the centaur Hylonome and the asteroid Persephone. Hylonome, named for a female centaur, is sometimes associated with ‘self-inflicted’ pain or death. It calls to my mind how Trump’s supporters hide behind the self-righteous, bigoted stance that asylum-seekers are bringing the horrors of border separation and detention on their own children by trying to get in the country ‘illegally’ in the first place.

Yet Hylonome can also represent ‘the cry of the poor’. And we are finally being given a way to hear the cries of these children, even if via third party reporting. The asteroid Persephone can describe attitudes toward leaving or being taken away from home, family and the familiar. Notice these objects are not only opposite Big Daddy Kronos and the eclipse, but they’re in Capricorn: the sign associated with government and big business. Or, in the case of the U.S. and so many other countries, the big business of government.

Square the Cancer eclipse and the Capricorn objects is the asteroid Ophelia in Aries, on one side. Ophelia suggests overreaction and counterproductive reactions. I’m pointing the finger at Trump and his supporters on this one, overreacting against ‘illegals’. Though I also see a suggestion here to watch for your own counterproductive reactions — such as going numb, or getting into social media screaming matches.

On the other side of the wheel, in Libra, are two more asteroids: Eros (joie de vivre, what turns you on, life force) and Iris (the messenger of the gods, and the message itself). I am heartened that they are in the sign of justice; that a passionate message stands in balance to the potential to overreact in unproductive ways.

More than that, I am looking for myself — and for everyone reading this — to be that message. To find the key to whatever it is that seems to have locked so many of us collectively into a surprising level of inaction and overwhelm. I hate to admit it, but I feel like I fit that description lately.

I know I’m supposed to talk about how the two weeks between eclipses (there will be a partial lunar eclipse in Capricorn July 16-17) is a powerful pattern-setting time to reorient on doing the things we love best; which is another way of describing what we’re on the planet to do: purpose is whatever makes us come alive. But ‘dharma’ can also be described as “acting as if to hold the world together.” I can think of a lot of ways this world, and the people in it, could be held. I’d like to do more of it.

P.S. Please check back later in the day — I plan to post some links in the comments for ways people can get involved and be heard on this issue.

8 thoughts on “Caring in Action: the Cancer Eclipse”