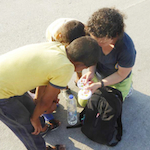 “’No! Me! My Friend! Me!’ he said. It was too close to begging. In his eyes I saw that he needed this game. In his desire I felt a wound deeper than the one on his knee.” Marcy Franck writes her final post from the refugee camps on Chios, Greece, knowing there is so much more need there than one person can fill.

Editor’s Note: This is the last installment from my friend Marcy Franck while on the island of Chios, Greece, volunteering to help Syrian refugees (though she says she has more posts coming); Marcy returns home today. You can read her other posts here and here, plus here and here on Planet Waves. Any donations made at her YouCaring page go directly to aid. — Amanda P.

I had seen the boy only twice before, but he ran to me and hugged like we were old friends. Long past the time when I might have otherwise let go, he held on. Eventually, I realized then that we weren’t really hugging. I was holding him, and he did not want me to stop. So I didn’t. 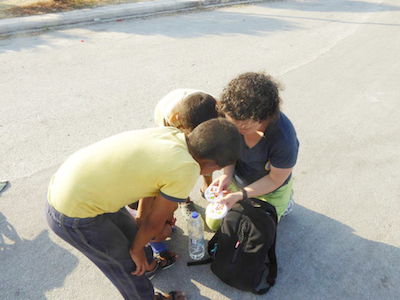 His older brother saw us, then ran down the sloped pavement with their toddler brother in a stroller. He’d gather some speed, then hop on and enjoy the ride.

He skidded to a stop in front of us and smiled.

He ran back up the hill to take another ride, likely for the 15th time that evening. There is not much else to do.

Sofia, a fellow volunteer with a deep maternal instinct, noticed a hole in the shorts of the boy I was holding, right near his knee. She asked him about it, and he lifted up the leg of his shorts to reveal a deep wound the size of a half dollar. It was fresh and not yet scabbed over, completely exposed to the elements, and too big for the small Band-Aids I had in my bag.

I looked at his face with a pained expression and he shrugged, then I looked past his knees to his shoes. They were Croc-like sandals, about three sizes too big. Even well-fitting Crocs are not designed for the rough play of kids his age, yet everyone is wearing them because you can buy them for about 3 euros in a nearby discount store. When you are a grassroots organization that relies on private donations and you need to buy shoes for 2700 people, 3-euro Crock knock-offs seem like a very good idea. I have purchased many pairs myself (Thank you, donors. Take heart that I bought the right sizes!)

It’s better than barefoot, better than nothing. Or so it would seem, until you see the crusted over, formerly infected, untreated wounds of so many kids here. I wish I could arrange a vat of Neosporin to arrive ASAP.

Sofia gave him some small smiley-faced stickers. She meant to give him only a few, but ended up giving him the whole sheet. Then his older brother slid into view and took the stickers from him. Sofia made him give them back, then peeled a few off to give to the older and younger siblings.

I thought about how bored they are, and that they needed to find something quiet to do to let the wounds heal for a while. I have been carrying a game of Spot-It in my bag all week, and I decided it was time to give it to these brothers. All three of them can play together — they simply need to find the matching animals on each card. They can play with anyone in any language. It is the perfect game to play at a refugee camp, with kids who speak so many different languages.

I took it out to show the younger brother how to play. He said, “Me! Me! My friend, Me!” and then tried to give the stickers to his older brother as a fair trade.

I have picked up the annoying habit of repeating all my words, as though saying them twice in English makes up for my lack of Arabic.

“No! Me! My Friend! Me!” he said. It was too close to begging. In his eyes I saw that he needed this game. In his desire I felt a wound deeper than the one on his knee.

And I wanted to give it to him, I really did. But I had nothing for the other two, and I know they had similar wounds that would tear open by the injustice.

I really hate saying no.

The older brother ripped it out of his hands, but I ripped it right back out again. Then I showed them all how to play. We had fun.

Then it was time for Sofia and me to go. When I put on my backpack and said goodbye, our boy said “No! No!” and held on to me tightly. He held my hands. He kissed one of them, then held on tighter.

Again I felt his invisible wound opening. He has seen me only twice before. I am a stranger, but that didn’t matter to him. He needed more from me than a game of Spot-It, more than a 10-minute visit in the parking lot.

To not be able to give him what he really needed tore open my own wound that has been tearing wider and wider since I’ve been here.

So I handed him the game then peeled him off me. I gave them each a high-five and pointed to a shady spot under a tree across the parking lot. The older brother ripped the game out of his hands and sprinted to the tree with the stroller. Our boy ambled over slowly to join him, but watched me walk away until I was out of view.

To learn how you can help too, click here.

3 thoughts on “Wounds that Won’t Heal”