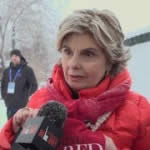 The Sundance Film Festival has been surging with energy from the #MeToo and #TimesUp movement. It was at Sundance two decades ago that movie mogul Harvey Weinstein allegedly assaulted actress Rose McGowan. McGowan said Weinstein offered her $1 million hush money.

Women’s Rights Attorney Gloria Allred on Suing Donald Trump for Sexual Assault: “Truth Matters”
The Sundance Film Festival in Park City, Utah, has been surging with energy from the #MeToo and #TimesUp movement. It was at Sundance two decades ago that movie mogul Harvey Weinstein allegedly assaulted actress Rose McGowan. McGowan told The New York Times in October that Weinstein offered her $1 million in a hush money payment if she signed a nondisclosure agreement to not come forward with her charges that he raped her in a hotel room during the 1997 festival. Longtime women’s rights attorney Gloria Allred represents one of the women who have accused President Trump of sexual assault, and feature an excerpt from a new documentary on her life and path-breaking legal career, called “Seeing Allred.”

A Lifetime of Activism: Jane Fonda on Gender Violence, Indigenous Rights & Opposing War in Vietnam
Political activist, feminist and Academy Award-winning actress Jane Fonda gives an in-depth interview at the Sundance Film Festival, where she is the focus of a new documentary, “Jane Fonda in Five Acts.” As actresses in Hollywood are being recognized for speaking out in the Time’s Up movement, Fonda discusses how she has consistently challenged power, from opposing the war in Vietnam to organizing around civil rights and economic justice.

Actor & Musician Common on Erica Garner, Colin Kaepernick, DREAMers, Trump & Standing Up for Justice
Oscar-winning musician and actor Common was nominated again for an Oscar on Tuesday for his song “Stand Up for Something” from the film “Marshall” about former Supreme Court Justice Thurgood Marshall. Common is also starring in “The Tale,” a film about child sexual abuse. On Saturday, Common also performed at the Respect Rally in Park City. He discusses civil and voting rights, Colin Kaepernick, the late anti-police-brutality activist Erica Garner and President Trump.