The other day I joined Channel 13, the public television station that serves metro New York City and upstate by cable. Or rather I should say that I finally joined.

Thirteen was part of my childhood, like just about every kid in New York City. It was the home of Mr. Rogers’ Neighborhood, Sesame Street and many other worlds, and it provided a refuge in my stressed-out home. My earliest memories of Channel 13 are emotional rather than visual. It was a place I felt safe amidst plenty of turmoil, in a time when TV was not so friendly. In that era, the Vietnam War was the big story, and it was on every night at dinner. (My father was working toward his Ph.D. in media, so TV was a conscious study.)

The environment of Thirteen was calm, inviting and I felt welcome there — especially by Mr. Rogers’ house. It was a safe place for me. If there was one kid he was speaking to, whose self-esteem needed some help, that was me — and that reassurance came by way of Channel 13. 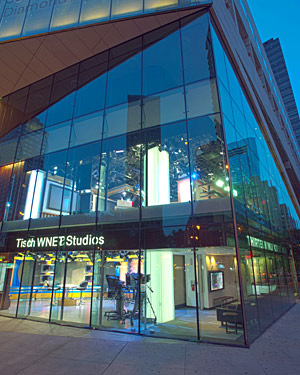 THIRTEEN is one of America’s most respected and innovative public media providers.

As a non-commercial station, Thirteen has no interruption advertising. I consider TV ads to be one of the most horrid facts of life, and as a journalist who feels he must follow TV, they are my nemesis. Planet Waves and Planet Waves FM are ad-free and reader/listener-supported. I share an important business value with public television.

My godmother Aunt Josie was a longtime member of the station, and she seemed to have her canvas Channel 13 tote bag everywhere she went. Aunt Josie was my benefactor who ensured that I would have a writing career, by providing me with funding for several publishing projects between 1989 and when she died in 1994. With her help, I established myself as a writer and publisher. She was a fan of Channel 13 and certainly would consider it a worthwhile investment.

Most significantly, I would come back to Thirteen again and again as a calm environment with solid programming. When I did this, I was aware that I was not a member, and I would question why and not get an answer. This was an odd contradiction to my values as I love to hand over my credit card in the benefit of something I appreciate and count on.

I’m aware how costly it is to produce programming and maintain all those broadcast facilities. I’m aware how much television advertising costs, much of which money is poured into production expenses (and yes, some generous salaries here and there).

It irritated me that I was not a member and I actively questioned why. Was it certain corporate sponsors? Was it the fact that they did not carry Democracy Now! with Amy Goodman? Those played some role, but I knew there was some inner connection I was not making.

Finally a few weeks ago, I was home on a Saturday night, a bit cranky and not feeling like doing much of anything. The wasteland of television is even worse on weekends, and it occurred to me to check out Channel 13 (I have this bizarre tendency to forget to watch DVDs or Netflix). Saturday nights Thirteen plays classic films in its Reel 13 series I’ve watched a bunch of times. The most memorable so far has been Sunset Boulevard, which I had never even heard of.

That particular week the film was The Music Man, which I consider a masterpiece. It’s funny, the story is brilliant, the acting is Broadway and the music is fantastic (and it started as a novel, which I think is hilarious). It is a culture-bearing film; it reveals something about the American people. This time around I noticed how amazing the visuals were, scene after scene, particularly the one in the photo above.

I realized that suddenly I was feeling pretty good. Nothing like art to shock one out of a bad mood. At that moment I decided to join Channel 13.