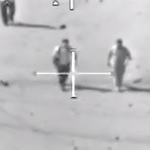 Anyone remember when WikiLeaks actually did its job? As the finest moralizers on the interwebs pick apart the news that someone wrote some emails about something, Eric refreshes our memories about what’s really important.

So, here is why I don’t give a toss about Hillary’s emails, and why I think that every last comment is misdirected. The work of Wikileaks was done when it published the helicopter assault video, “Collateral Murder,” documenting the known killing of civilians by U.S. forces in Iraq. Assange followed up with another more-than-enough release of information: the civilian casualty database. That’s all we need to know.

I don’t remember many people caring that much. Now we have some emails that will probably document influence peddling. At worst, this will be jacking the banks and military corporations. We already know this. Stop acting so damned shocked and speak up about the one thing that matters, all these wars.

I’ve been sitting at this desk since the summer of 1990 reading about and documenting one long situation in Iraq and numerous other actual wars in the same approximate region. We know everything we need to know.

Obsessing over these emails gives you a false sense of power, and of righteous indignation. Stop kidding yourself. What matters is the fact that our country is a war economy and cannot survive without it. That includes petroleum in every form, since it takes a sea of jet fuel a day to keep those drones and F-18s in the air.
I am utterly appalled by the petty level of this conversation. I am also appalled by the one issue that I believe runs in parallel to war, since it comes down to the same thing, which is the treatment of women, and so many people willing to condone someone who is by all accounts a serial rapist.

“But what about those emails?”

WE ALREADY KNOW WHAT MIGHT BE IN THEM AT THE WORST.

That is the issue. I come to this page every day and read endless whining about some fucking emails. NOT about what is in them. NOT about the tendency of OUR COUNTRY, NOT ANY ONE ADMINISTRATION, to wage war against anyone, at all costs. That is the moral issue. Iraq and its expansion projects have been passed back and forth between Republican and Democratic administrations and will continue to be so.

I suggest that the political moralists and purists speak up about this issue. Watch the video if you can. Stop and reflect. That’s the hard part. Watch this video and say to yourself: “I paid for this.”

Ask yourself: Where have I spoken up about this truly appalling outrage? And if you have not, maybe it’s time.