Friday’s Leo New Moon arrives with at least a couple layers of messaging. One is that If you give yourself over to love and artistic expression, you have a responsibility to stay true to whatever moves your soul to ‘dance’ — and to treat those parts of yourself with compassion and generosity. There’s also a caution to watch for the shadow side of self-focus.

In the Monday Astrology Diary, I wrote that, sometimes, you need to dance as though nobody is watching. Other times, it’s nice to know that everyone really is watching, and that in some way they’re dancing with you. And sometimes all that matters is that, when you close your eyes and move, no matter who is or is not watching and no matter how they may or may not judge you, you let your heart guide you toward love. 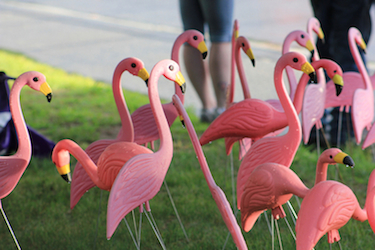 “You’ve been flocked!” Part of a church youth group fundraiser at Casco Days this year. Photo by Amanda Painter.

This was the first message that came through as I looked at the chart for Friday’s Leo New Moon.

Right in line with the Sun and Moon is retrograde Venus, about a day away from its exact conjunction with the Sun. This marks the halfway point in Venus’ retrograde.

Both planetary retrogrades and New Moons can have the sense of looking inward. Retrograde planets often also imply a review of the past in some way.

So if you’ve had any exes make contact with you in the last week or so — especially if it’s been more than one, or if you can trace a common thread or theme — this definitely counts as a manifestation of retrograde Venus (reviewing love relationships) conjunct the Sun (conscious awareness). You’ve likely noticed other themes, including getting back in touch with your inner child’s sense of playful creativity.

It’s the quality of looking inward rather than outward that suggested to me the whole ‘dance as if nobody is watching’ idea, in concert with some of the minor planets in aspect to the Leo New Moon. Closely flanking the Sun and Moon, we have the asteroid Eros (god of love), retrograde Venus (goddess of love), and the asteroid Terpsichore (the Muse of dancing) — all in Leo.

Opposite that cluster, in Aquarius, is the asteroid Damocles. The parable of the Sword of Damocles recounts a courtier who, upon taking the seat of the king for a day, became aware of a sword continually hanging by a hair above the throne. It symbolized how fortune and power come with great responsibility.

Damocles in Aquarius brings the question of what kinds of power, fortune and responsibility you meet in social groups, and especially when using technology (think social media). If you give yourself over to love and artistic expression, as Venus, Eros and Terpsichore suggest, you have a responsibility to stay true to your artistic muse — whatever moves your soul to ‘dance’ — and to treat those parts of yourself with compassion and generosity.

When you do so, it doesn’t matter who is watching or not; your actions then are not about impressing anyone, or being accepted into a group, or influencing or manipulating anyone. If someone else does happen to receive joy from witnessing, or is inspired to ‘dance’ too, all the better — but that’s not why you do it.

It can feel like your very life depends on pleasing everyone else with what you create and how you love. But it does not. You are not responsible for the opinions of others.

However, inward self-focus is only part of the story. And while that’s necessary if you’re trying to be creative, compassion and awareness also need to be extended to those around you. It’s also up to you to notice the messages others’ actions, as well as your own in context.

Simultaneous with the New Moon, there’s a flowing circuit (or triangle) of fire energy called a grand trine connecting the Leo New Moon cluster with planets in Aries and Sagittarius. On the one hand, that’s a lot of ‘spirit’ energy that you can access by taking tangible steps toward creative or ‘spiritual’ endeavors.

The configuration also describes a lot of ‘self-interest’ that could express in shadow form, thanks to certain minor planets in the mix. The thing to watch out for is if your sense of disregarding the judgments of others edges toward a disregard for ethics, morals, potentially negative (and cascading) consequences from your actions, or a hidden agenda.

Anybody is capable of anything; that’s just as true of compassion, affection, generosity and artistic expression as it is of lying, cheating and selfish thoughtlessness. It’s up to you to choose your actions carefully, to read the actions of others and to listen to your intuition. You also get to choose your dance tunes.

9 thoughts on “Who’s Dancing, Who’s Watching and Who Cares”