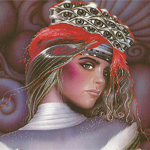 The two outer cards in this week’s reading couldn’t be more contrasted if I had gone through the deck and hand-picked them myself; while the card in the centre is the turning point, away from one, and towards the other. 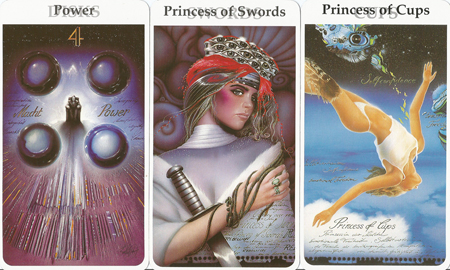 Four of Disks, Princess of Swords, Princess of Cups from the Röhrig Tarot deck, created by Carl-W. Röhrig. Click on the image for a larger version.

Like all of the Fours in tarot, the Four of Disks is associated with a ‘pause’ — here, specifically, the pause that happens at the point of a consolidation of power, where a decision is being offered for consideration. In the Two and the Three of Disks, you started to understand how to move through, and work with, the physical world, including how to start working towards a particular material goal. In the Four of Disks, you have amassed enough (possessions, money, repute — take your pick) that you have attached a certain importance to it. It is the outer demonstration of achievement and agency.

And yet here is the decision that is on offer to you, if you are able to recognise its presence.

The Princess of Swords to the right, and facing away from, the Four of Disks tells me that a process of liberation has already started to take place. This is your self-enacted liberation from ideas and beliefs about who you are, and why and how you are in relationship to the world. And, especially, in relationship to power.

The Princess of Swords in her highest expression — the expression that is not held in the shadow of your sub- or unconscious — is the liberator. Her razor-sharp intuition and insight are as keen as the sword-blade that she uses to cut through the chains and ropes that bind her. Her youth, her rebellion, have an “out of the mouths of babes” quality to them. She is asserting her authority over herself. Hers is the embodiment of autonomy and the will and ability to fight for it.

In her shadow expression, she is the rebel for rebellion’s sake — taking an unquestioned and dogged polarised stance that binds her forever to her opponent. In which case, the bonds remain even as she believes that she has severed them.

In this three-card reading, however, the Princess of Swords’ self-liberation releases her into another world entirely: the world of Cups, and her watery counterpart.

The Princess of Cups epitomises bliss in its most felt form. It isn’t simply the idea of bliss; it is the feeling of bliss, which she has the confidence and freedom both to allow to flow in her, and to flow from her and into her environment. She dives through the air, arms outstretched, heart opened and exposed. The vulnerability both of her body-language and her circumstances speaks of surrender. But in this case, it isn’t a surrender to another person, idea or thing; it is a surrender to herself and to life.