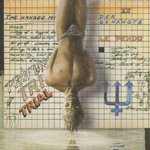 Does the current environment feel like you’ve stepped on to the set of a David Lynch movie — except this is your life, not someone else’s? Welcome to The Hanged Man and his Neptunian influence writ large in this week’s reading, which Sarah Taylor explores along with the Two of Swords from last week’s reading, and the Prince of Cups.

The final card in last Monday’s reading — the Two of Swords — is the first card this week. What I take from this is that that sense of moving into new territory forms part of the foreground of the story being woven by all three cards present today.

Let me go back to what I wrote last week about the Two of Swords: 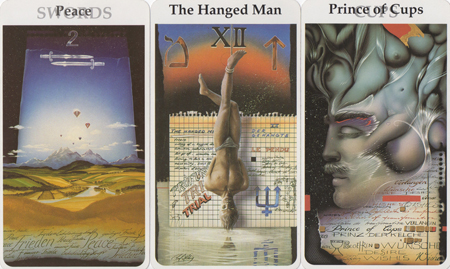 Two of Swords, The Hanged Man, Prince of Cups from The Röhrig Tarot deck, created by Carl-W. Röhrig. Click on the image for a larger version.

“The Two of Swords — Peace — is another card that speaks of transition: the creation of a through-point that clears the skies enough that you can journey to new land. And it looks like the journey itself could be one beautiful adventure, if you are open to moving in a way that you may not be used to, open to living with a lot more (head) space than you may be used to.”

I believe that journey is either taking place, or is imminent. The reason I don’t believe it has taken place already is because of the position of The Hanged Man in the centre — and when I write “position” I don’t simply mean that he is suspended: I am also looking at his feet and where they are pointing as he sinks his head into Neptunian waters.

The Hanged Man is indeed associated with Neptune — a planet that is currently very active in our astrology. Both the card and Neptune work well together in terms of their meaning. The Hanged Man describes the experience of not only being suspended with little choice as to where to go, but also of having entered a state of consciousness where nothing feels ‘right-side-up’ anymore. There is a surreal edge — perhaps more than an edge — to The Hanged Man when the archetype brushes up against and into your life. Things can feel a little weird, out of whack, apt to behave in ways that are less than predictable.

The reason for this is the water into which The Hanged Man’s hair is dipping. He is getting to experience the emerging unconscious.

Problem is, he didn’t want to go there himself, so the perfect circumstances were created so that he had little choice in the matter. It’s as if one minute he was innocently walking along a path next to a pond, and the next — whoosh! — he stepped into a looped rope and it swung him up into a tree and lowered him toward the water, head-first.

The kicker in all this? He is you, and you helped to create those circumstances yourself. So, you might have to swing there angrily for a while, feeling the unfairness of it all. Until the point comes where you can choose to give up the struggle and relax into your surroundings. Take a little dip into those mirror-like waters that give away little yet hold so much. And don’t worry: you can still breathe. It’s just that the air here is going to feel thicker, full as it is with images and dreams and fleeting impressions and sensations that feel more at home in a David Lynch movie than they do on the film set of your own life.

But what David Lynch movies do so well is that they are celluloid expressions of the unconscious. They are at once disturbing and hauntingly familiar; they unsettle and yet feel like home — but a part of home you don’t tend to visit much; a locked room.

The Hanged Man gives you a key to that lock. You get to peek your head round the door and to step in as your head lowers further, and further, towards the rippling pool.

Now look at The Hanged Man again. He has already reached that state of surrender. His eyes are half-closed, suggestive of meditation, and he is still. Still, quiet, so that he can meet his unconscious on its terms, not his.

Moreover, his left foot seems to be gesturing to the card on the left, the Two of Swords, while the toes on his right foot are turned towards the final card, the Prince of Cups. Two very different cards. He is suspended between both.

The Prince of Cups seems to be deep in meditation, too — except here we can see exactly what his focus is on. We are privy to his feelings and his desires. Breasts, cocks, vulvas, curves fill his inner vision as he faces towards The Hanged Man.

He is The Hanged Man. Or an aspect of him, as the twelfth card in the Cups suit to The Hanged Man’s “12”. As are you, and your desires, and your draw towards the sensual, the sexual. In the past, I have referred to the Prince of Cups as one who “thinks about love.” This he is very much doing; and it is a particular form of love. Eros.

But it is time to stop thinking it, perhaps, and to start knowing it. And so the Prince of Cups and his concomitant “possibilities for transformation” are dipped into the transforming waters of The Hanged Man — both Hanged Man and Prince in suspended animation.

All the while, the Two of Swords holds its presence at left, an equal player in the current circumstances. There seems to be an alchemy between all three cards: the Prince shifts through the christening of The Hanged Man and into “a lot more head space.” With it, there is release from suspension, and you take what you have gathered into yourself for the onward journey.

A journey you would not have known were possible if you had not remained still enough to open to the deep.

Astrology/Elemental correspondences: Two of Swords (Moon in Libra), The Hanged Man (Neptune), Prince of Cups (the airy aspect of water/Scorpio or Pisces)