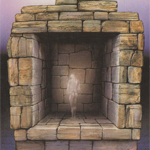 In this week’s reading, Sarah Taylor explores what it is to make a choice between something that weighs heavily from the past, and perhaps from deep within, and one that frees you to make a courageous leap into the arms of transformation and resurrection.

Look at the angel in The Judgment. Do you hear what she is saying to you?

“You have a choice. One way or the other. Choose to be hemmed in and enclosed, or take a risk, and leap.”

After I drew the cards today and before turning them over, I placed the first at centre, the second to its left, the third to its right, and, looking at the central card, said out loud to myself: “This the ‘pivot point’.” 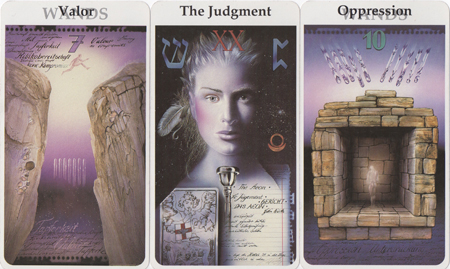 Seven of Wands, Judgement, Ten of Wands from The Röhrig Tarot deck, created by Carl-W. Röhrig. Click on the image for a larger version.

I am going to start with The Judgement, for she is the first and last word — or, rather, clarion call — in this reading.

Associated with Pluto in astrology, The Judgement in tarot is about the reclamation of Self through the resurrection of Spirit. The card directly before The World, The Judgement speaks of a rebirth into the light, a sweeping aside of the veils that have held you separate from your sense of who you are, from the world and from others.

The 20th card in the major arcana is also transpersonal. In other words, this is not simply about you; it concerns itself with how you and what happens to you are an indelible part of the whole. What happens to you also happens through you, and the effects both ripple out into the collective, and also return to you from the collective. The card asks you to see who you are, and what you are experiencing, from a higher perspective. You are no longer solitary and hidden. You are Neo in The Matrix. Except we are all Neo — no one more special than the other, no one more worthy of salvation than someone else.

It is only when you see that you cannot be separated, and that your coming to life has repercussions of which you are possibly unaware — and, what’s more — you see yourself as a unique part of what is inseparable — that you can heed the call to something greater. You are worthy; and so is everything else.

Looking at the cards as a whole, I am drawn by the colours that unite them: deep blue-black, purple, mauve and white. The darker side of the face of the angel in The Judgement is echoed in the darker shades of the Ten of Wands, or Oppression. It is the shadow. In this particular shadow, there seems to be the assumption of a burden for which there is an energetic price to pay.

By “energy” here, I mean life force. There is something that you have elected to do that is taking up a lot of space in your reserves — so much so, there is a feeling that you haven’t much space for anything else. Ten glass wands weigh heavily down on a naked figure enclosed in a box of stone.

What is that box? And why have you chosen to stand in it?

The Ten of Wands is the last numbered card in the Wands suit. It is like an existential migraine: a squeezing of the self through a high focus of this life-force in a concentrated area. You are in a metaphorical oven, the heat up, your back turned to the exit point.

Again: What is that box? And why have you chosen to stand in it?

Because this is very much about a choice that now feels like it has become an obligation. That obligation, however, is probably more out of direct cognition than something that is staring you in the face. This is not a tangible obligation — though it may also take that form — but a psychic one. It is a contract you have signed with yourself, perhaps without knowing you were even holding the pen. It might have happened a while ago — perhaps a long while ago. While your back was turned. And yet you are the one who is in the hot seat, still holding the reins, still taking the heat.

Maybe it’s time to step out of your cell of solitary confinement.

And so to the first and final card, the one to the left of The Judgement. Look at the colours and how they correspond differently. Here, there is a sense of lightness, echoed by the light that is received from the card on the face of the angel. There is a message in this; a white feather pointing the way.

The Seven of Wands speaks of valiantly vaulting over the abyss of the unknown and into — well, into The Judgement. Here, in the Seven, life force is liberated — as you are — to make that leap. The Wands rise up to meet and to usher you across. The light is the light of what was once dark coming into consciousness. You now know what you are able to do. The world on the other side beckons, and you ride on the emergence of a part of you that had been held down in the darkness.

And, thus, you find yourself looking into the eyes of an angel. One who knows you because you now know yourself that much better. And you know what you are not. You do not have to stand, hemmed in by a contract that is no longer being called in by anyone but you. Tear it up, throw it away, take a run-up if you need it.