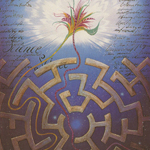 In a reading that sees two major arcana cards, and one minor arcana, Sarah Taylor explores what it means to experience illumination after a period of reflection, and how that has the potential to shift you from one state, or place, to another. 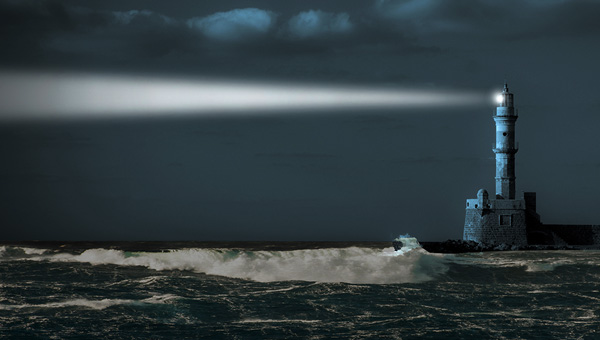 What happens when the Sun and the Moon come together? 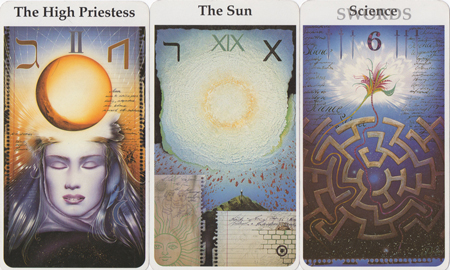 The High Priestess, The Sun, Six of Swords from The Röhrig Tarot deck, created by Carl-W. Röhrig. Click on the image for a larger version.

Illumination is the name of the game with this week’s reading of (from left to right) The High Priestess, The Sun, and the Six of Swords. From reflected light, to radiating light, to a moment of en-lighten-ment and the a-lighting after travel from one place to another.

Contrary to what many assume, The Moon in tarot does not correspond to its namesake, but rather to Pisces. It is The High Priestess who is the tarot representative of our Moon, and for good reason: she reflects the light of consciousness, much like the Moon reflects the light of the Sun. She is the feminine lunar to the masculine solar.

This can be seen practically in the role of The High Priestess, which is to experience Spirit. She then ‘translates’ her experience — non-verbal as it is — to those who cannot experience it directly. She is an intermediary, much like her partner The Magus, who, as Mercury, is the messenger between the divine and the human realms. But whereas Mercury is active, The High Priestess is receptive. She is not so much interested in outer communication as she is in inner communion.

The High Priestess also works alone. So this card, representing as it does the near past and foundation to your present circumstances, speaks to a time where it was necessary to take a step back and to listen. What you were listening for was the wisdom that was able to move through you when you were still enough to be its container.

How still were you? How clearly did you hear it? How true to its words were your own?

Because the challenge with The High Priestess is that the truth you received may have been an inconvenient one — for you, or for those around you. Or both. It’s one thing knowing for yourself a particular truth; it is quite another fully admitting it to yourself and communicating it to those for whom it is meant. Frequently, The High Priestess will know, but she or others will not want to. Sometimes, The High Priestess is in the painfully privileged position of holding an answer that will remain unacknowledged. More than that: she may be punished for it.

However, The High Priestess’s power is not in the message: it is in her ability to connect in the first place. Anything that comes from that is secondary. Her power is personal, private, often silent and seldom recognised — and cannot be diminished for its lack of voice or recognition.

You may have gone unacknowledged, what you held inside undiscovered — maybe even ridiculed. Take heart in your ability itself, and not in its results.

It is this ability that has connected you with the current illumination that is hitting your world full-on. What you knew, can now be seen first-hand. What you felt as truth has, in some way or another, come out into the open. Under the light of The Sun, everything is revealed. There can be no secrets and no hiding; there is instead an opening to consciousness and the rays of awareness that blaze into every corner, nook and cranny.

The work is done. Well, this particular aspect of the work anyway. In one fell swoop, we have spanned nearly the entire major arcana, and walked the path of the Moon and into the Sun. Night to day. In the relative blink of an eye.

The Sun is an interesting card to me because frequently it is seen as an entirely positive one. I see it differently. It is positive, but objectively so: it is not limited to joy or happiness but encompasses the myriad ways that something can come ‘to light’. It is neither good nor bad. It shines. And in that way, we are freed from the secrets we have kept.

It reminds me of a conversation between the two main characters, Sue and Mick, in the movie Crocodile Dundee. Sue is trying to explain the concept of therapy to Mick, but it is Mick’s wisdom that throws things into a different light:

Sue: I suppose you don’t have any shrinks at Walkabout Creek.

Mick: No. Back there if you got a problem you tell Wally. And he tells everyone in town, brings it out in the open, no more problem.

That’s The Sun. Out into the open; no more problem. Not unless you want to make more of a problem out of it. But why would you want to? This is a shift into a new state, and one that brings you into the company of others: when there’s more light, you also get to see who’s around you.

And there is more ‘shift’ to come in the final card, which hints at what is moving over the horizon — perhaps even literally. The Six of Swords — or Science — describes the voyage from one place to another — often metaphorically, but sometimes geographically too.

What had remained unclear in the painful skirmish of the previous card that is implied by the Six’s presence — the Five of Swords — has now had the light of consciousness trained on to it. This consciousness is fearless; it simply wants to see. There is currently in you a willingness to see what The High Priestess knew all along. You are at a point of admitting to yourself and others what you had sensed, and in a way that sets everyone free. This light generates forward movement, the solution to what seemed like an insoluble problem, the ironing out of a wrinkle or two — or three — of misperception.

There is the understanding of something at hand. A “light-bulb” connection is made. New shores beckon.

Planet Waves is currently running a membership drive entitled the Art of Service — pretty fitting with a tarot reading this week that has illumination as its core focus. I spoke a little about my own experience of Planet Waves last week, and how I found it at a time when its support made an appreciable difference in my life. I know that I’m not the only one.

We can all do our bit to keep Planet Waves shining. You can do this by simply spreading the word, donating, or joining our community if you haven’t already done so.