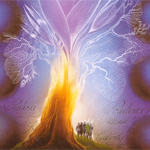 Sarah Taylor looks at The Judgment’s second appearance in the space of seven days and suggests that you are currently between one wave of revelation and the next. In the meantime, there is something entirely practical at hand to which you can devote your time, care, and attention, knowing that it, and what is being revealed by The Judgment, are inseparable.

Another week, yet another two major arcana cards — this time surrounding a card from the minor arcana at centre, the Eight of Disks.

Matters of the Soul remain at the fore, this time grounding into a particularly practical, physical experience that is asking you for your due care and attention. But first let’s look at what brought you to this point by seeing what underpins it. 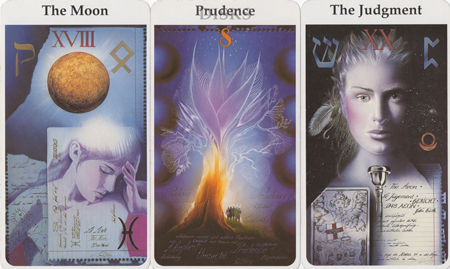 The Moon, Eight of Disks, The Judgment from The Röhrig Tarot deck, created by Carl-W. Röhrig. Click on the image for a larger version.

The Moon at left represents the foundation to the Eight of Disks, most likely being part of your near past. The words that I can decipher on the card read as follows:

“End of karma,” “final trial,” “Examination of the subconscious,” “Threshold of the new level of awareness,” “Illusions.”

The Moon signals a time that seems to be defined by a lack of clarity. On the one hand, this can be confusing: the conscious mind wants to make sense of what, to it, feels nonsensical. It is hell-bent on using its familiar language to construct meaning around what seems to defy meaning — much in the same way that you will see things in the shadows under a moonscape that you cannot quite make out. In this light, you have entered the borders of dream-time. Reality feels permeable, edges seem fluid, the impossible a little, or a lot, more possible.

If you insist on continuing to try and make sense with your daylight faculties, it’s much like insisting on speaking French in Japan and believing you will not only be understood, but that you, too, will be able to understand others. Not so. What The Moon asks of you is to throw out your familiar, intellectual way of communicating with the outer world, and instead sink into your inner world, the spaces between, and flow with a new rhythm.

Your inner eyes, trained as they are on shadow, will inevitably start to become used to what had eluded you when you were insisting on your tried-and-tested means of analysis. This ‘language’ is heart- and body-based; it bypasses thought; it comes to you in feelings, impressions, sensations, inklings and prickles. It brushes against you when your back is turned; it breathes warm air on your neck; it whispers when you’re the quiet, receptive denizen of negative space.

It comes to you in the gaps.

Seen another way, in the recent past you received some kind of psychic blueprint for a project, an object, or a situation that has the potential to be wholly tangible. Handle it with care, though, my friend: it is still fragile, its intricate structure a vessel for something that lives and breathes. Give it time and care to grow and expand in a way that feels natural. Feed it, water it, speak to it — in other words, pay attention and respond to what it asks for, and what it asks of you.

You are not doing this alone, nor is the outcome just for you. It is not a vanity project, and it is worth shifting out of that mode of relating to it if it feels you’re being drawn that way. Yes, you have been integral in its birth and will remain integral to its growth — though it might be a whole lot bigger, and involve more people, than you are at first imagining.

Finally, you will see that it is in some way connected to the breakthrough and call to action that was embodied in last week’s reading: The Judgment, at centre just six days ago, is here and coming up on the right, the near future. This is what I wrote about The Judgment then:

“Hint: get out of your own way. There is nothing else you need to do. There are bigger forces at work than you alone, and they are the driving factors. To push is to add unnecessary fuel to an already kinetic situation. To resist is to look into the eyes of an angel and mistrust what you see. There is no need to fight; the weapons were laid down some time ago. It is time to listen, to hear what is being spoken to you through the trumpet-blast of your own awakening.”

That trumpet blast will be heard again in the next few weeks — the second wave of your awakening to some aspect of yourself. It feels like the contractions through a birth canal — or a re-birth canal.

And that hint still stands true: get out of your own way.

Tend carefully to what you’re creating in the Eight of Disks, and surrender the need to try and control anything else. The wisdom of the angel in The Judgment asks not for your active assistance in your awakening. Instead, keep your eye on what you know, and where you know you can make a difference.

Look to what is emerging in your world — it will be tangible, something you can name. This is not the time to leave an unprotected plant outside if an unexpected frost might hit; this is not the time to turn your back and ask for what you have brought through to fend for itself, when your participation with others in its evolution is an integral aspect of the experience. Participation isn’t a behind-the-scenes factor right now; it is one of the principal roles you’re (all) playing.

There is change possible here; devote yourself — your love, your dedication, your mettle, your ability to ask for help and to receive it: these will stand it, and you, in good stead. Because, here’s the secret: it, and you — all of you — are inseparable. Knowing that, how can you do all of you justice?

What is your next move?