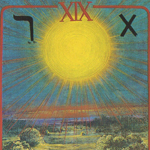 This week, Sarah Taylor talks of a new experience that may be emerging as a potential: that of no longer feeling separate from a world that not only holds you, but gives you life. It may be an entirely visceral experience of belonging — but this belonging will not be to another person, but rather to life itself.

Vision Quest, Planet Waves’ 2016 annual edition, has been published. Order all 12 signs at a great value or choose your individual signs.

Just like last week (with the Prince of Stones, Aeon, Three of Swords), this week’s spread holds a Court, a Major Arcana, and a Minor Arcana card from left to right respectively — only this time we have Queen of Stones, The Sun, and the Nine of Stones. So, quite a different picture. 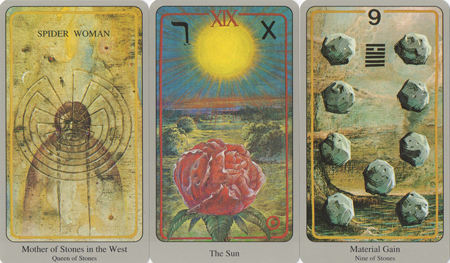 Queen of Stones, The Sun, Nine of Stones from the Haindl Tarot deck, created by Hermann Haindl. Click on the image for a larger version.

To me, it offers a chance to grow up and into something different from the story depicted in last week’s cards.

Perhaps the opportunity to redo something, or to shift something, or to grow and nurture something that runs in parallel. Where, when, and how this happens will be individual to your circumstances, but the sharing of a) the same configuration and b) two members of the same the Court (Stones) are enough for me to know that they, like the web of Grandmother Spider, are interconnected; and, like the strands of her web, they will forever be shaped by their meeting.

And here’s another parallel: the river of blood on the right of Aeon seems this week to hold the current potential to spring into a full-bloom, full-blooded red rose in The Sun. The clouds last week have parted; the eye and the foetus have become blazing Sol in an alchemical reaction where the rain has brought beautiful life to the land below.

Instead of three Swords — “Mourning” and conflict borne of thoughts at odds with each other — there are now nine Stones, or Pentacles. The mind has found a grounding presence. There is an identification with the world of nature; there is a guiding force that nurtures a connectivity to our roots.

What does this mean for you?

In some way, you no longer feel separate from a world that not only holds you, but gives you life. It may be an entirely visceral experience of belonging — but it will not be a belonging to another person; rather, it’s belonging to life itself. Which may well be felt as the blooming of a belonging to yourself, or the potential for that.

There is the potential to feel part of something bigger, but in a way where you are neither lost nor rendered helpless. Far from it. For this is the kind of participation that needs you; it asks for you because you have something to offer, and you also see what is offered to you. It’s not simply an exchange, though, or some kind of cool, rational transaction — though it might make more sense than anything you’ve come across for quite some time. No, this exchange has meaning to it. It holds heft and depth. It is rooted — and there’s that connectivity again. It feels old — ancient, in fact. Yet it may also have the sheen and fragrance of something sprung fresh from the earth that has held and fed it.

New ideas based on old principles. A new vision that your soul has known forever. A new offer or journey that has been walked in myth, in stories, in others’ tales over and over again. A moment of striking realisation that brings something out of the shadows, and now — now — you can see where you’re going. At the very least you can see as much of the road that you need to see. You have an idea that you have all you need, and simply by putting one step in front of the other, that road will rise to meet you.

The written readings for all 12 signs of Vision Quest are available for instant access, and so are the audio astrology and rune readings! Order all 12 signs here, or select individual signs here.

This rising of the road is the support implied by the Nine of Stones. This version of the card is called “Material Gain.” In a later version, Haindl changed it to “Delight in Existence.”

This is more nuanced. We’re not talking about material possessions, and how much you can get, so much as understanding and seeing what you already have available to you. You become richer through the acknowledgement of the riches around you, particularly in the natural world: the riches of nature and life, yes; and also the richness of the patterns of thread after thread after thread that weave you into a fabric as vibrant as it is diverse.

This is not a concept. It’s not an intellectual exercise of thinking your world different. You will be able to feel this quite tangibly in some way in a particular area of your life. You will have a felt sense of existence and your active role in it.

But because this is tied into last week’s reading, that idea of choice that was central to the three cards’ meaning still holds today.

It happens through you, instead of your waiting for it to happen to you. You are the initiator.

I’ll leave you with the words of Rachel Pollack in part of her description of the Queen of Stones in The Haindl Tarot: The Minor Arcana:

“Taken one way, the little figure [at the mouth of the maze] represents creation, which begins with the Goddess, the center, and works its way through the stages to the outside. Taken another way it shows the soul entering the labyrinth, in search of sacred truth. Can we join with the Grandmother and remain ourselves?”

Astrology/Elemental correspondences: Mother of Stones in the West (the watery aspect of earth), The Sun (Sun), Nine of Stones (Venus in Virgo)