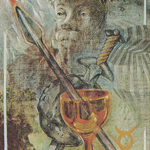 Are you following a personal calling? Are you walking a path simply because it is the path that you are expected to walk? These two questions lie at the heart of today’s reading, where Sarah Taylor explores the personal myth described by the cards, and the world of difference between your ability to react, or to respond.

“The cave you fear to enter holds the treasure you seek.” ~ Joseph Campbell

As with last week, this week we have another reading with two Major Arcana cards — this time, accompanied by a Court Card, which seats it very practically: there is something you can do, or rather something you can be or at least be aware of while the big changes that the cards suggest take place around and through you. 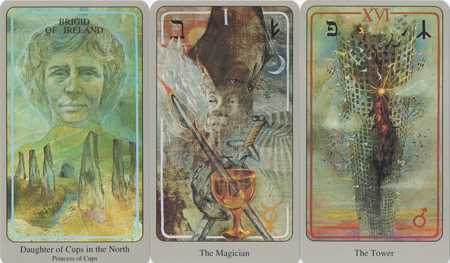 Princess of Cups, The Magician, The Tower from the Haindl Tarot deck, created by Hermann Haindl. Click on the image for a larger version.

And there are big changes, no two ways about it. What’s interesting to me, though, is that, once again, there will be times where things will simply seem to happen to you — that’s The Tower. But there will be ways that you can exercise agency in those events. You do not simply need to react to them. You have the ability to respond, too.

Remember that: the difference between reacting and responding.

That difference may seem subtle, but there is a chasm of difference between the two states. You are holding the potential to cross that chasm from one of being spectator to one of being a conscious participant.

The key to this lies especially in the relationship between the central card, The Magician, and the card to its left, The Princess (Page in the Rider-Waite Smith tarot deck) of Cups. More on that a little later.

First, the two Major Arcana cards. If you read this column regularly, you’ll know that I refer to Major Arcana cards as Soul-based archetypes. Together, the Majors comprise what Joseph Campbell described as The Hero’s Journey: the call to a personal mythical adventure that we choose to undertake consciously. Each experience we face, whether perilous or joyous, is a step towards becoming a whole person, and a unique one. We learn who we are, and where we have strayed from the path by trying to be someone we are not.

Archetypes are invisible and impossible to know or experience fully. We reach them through personal mythical tools, whether dreams, creative acts or, in this instance, tarot. They move through us, and we can sense them and their presence even if we can’t fully understand or pin them down.

Two Majors, as with last week, means that something significant is afoot. Pay attention to your dreams, to synchronicities, to recurring themes that seem to pop up asking for attention in your life — sometimes wrapped up in the least likely, most low-key exteriors. (Be prepared to share this with someone you trust. I tend to recommend a therapist who is well-versed in dream-interpretation because they will not only be prepared to take that journey with you, but they will also be a grounding element to your experiences. They will help you parse out the gold from the bullshit of illusion and wishful thinking.)

The Magician is the first port of call, because he is central to the reading and the first card I drew. He is the anchor. He is currently, or will soon be, active in your psyche. He is the manifestor, the darer, the creator. He takes the four elements, or suits, that make up the Minor Arcana as your day-to-day experiences, and shapes his environment from them.

The Magician also corresponds with Mercury in astrology, so pay attention to what unfolds in your experiences during the upcoming Mercury retrograde period of Jan. 5 to 24.

You are in the act of creating something. But what are you creating? And where is that creation coming from? What are your motives? How is your integrity to the call of your own Hero’s Journey?

The Tower is a particularly physical card, in that it is more often than not an outwardly experienced event based on an inner shift. The Death card is inner transformation. The Tower, on the other hand, is what happens a little further on down the road from that inner transformation — the ripple effect. Once you have shed a skin (which was indicated by Death, card XIII, in the near past position in last week’s reading), and you have readjusted your course (Temperance, card XIV), what is then able to emerge is what was rendered to the darkness in the first place (The Devil, card XV).

You, Hero of your own Journey, have created the space to let in enough light to see what you hadn’t known about yourself before this. And from this encounter comes another shift: The Tower, which is the falling away of something that will simply not stand in integrity anymore.

The Tower is ruled by Mars, so this falling away can be sudden and powerful. It may take you unawares, but it will not be entirely unexpected when you’ve had some time to survey the rubble. It will only be because you were trying to convince yourself you could keep on keeping on. That you had this. That you could control uncontrollable circumstances that were trapping you and keeping you from your real purpose.

The Tower can also be a blessed, expansive relief and release of something holding you down and back. One way or the other, The Tower meets denial with reality.

The funny thing is that when I see this particular version of The Tower today, I see ribbons dancing around a soulless monolith. Maybe there is more cause to celebrate than you first think? The clue for this lies in the card towards which the light face in The Magician is looking: the Princess of Cups.

In the little white book that accompanies the Haindl Tarot, which is based on the longer books by Rachel Pollack, the description for the reversed meaning of the Princess of Cups is, “Importance of personal history ignored.”

Here is the key to the agency that I wrote is available to you in this reading — the one that works with the energy of The Tower, rather than in denial of it.

Look at your personal history and the role that it plays in how you choose to operate and shape your current experience. Are you doing something because it is an expression of the truth of who you are? Are you following a personal calling?

Are you walking a path simply because it is the path that you are expected to walk?

Or are you doing it as a denial of who you don’t want to be?

That last one is important, because frequently it is your heartfelt determination not to be like someone, or not to do what you are supposed to do, that drives you: it drives you back towards the very thing you are expending so much energy running from.

The only way out, this time, is through. You cannot circumvent history. You can only change it by, finally, feeling it. We are in the realm of Cups here. By entering the cave of your ancestors, you are giving yourself the time and space to heal your heart. There is an element of surrender to this. You cannot force yourself to feel, but you can stop holding onto what isn’t working any more. You don’t have to be shaken off. You can simply let go. And by “letting go” I don’t mean giving up or giving in, or rescinding responsibility. It is the most responsible act you can do: responding rather than reacting.

Be aware that it’s hard to see and look for our blind spots. They are, by design, hidden from direct view. Again, it is better to call in assistance. Find someone who will listen and hold you if need be. Find a quiet place where you can feel that you are a product of where you came from, but not a victim of it. Or find both. I am a huge proponent of personal therapy if it is within your means. If not, then a confidante is an excellent idea.

This is great work here — the Great Work. But you have both the archetype of The Magician and the soulful connection to your beautiful heart. And you have the chance to build on firmer foundations: the ones that connect you to your integrity, your Soul. The Tower is not compulsory; neither is it the monster that so many people build it up to be. The pain is optional and it comes in the holding on. The letting go allows the new into the picture. The energy starts moving. There is room to breathe, and to live.

Astrology/Elemental correspondences: Princess of Cups (the earthy aspect of water), The Magician (Mercury), The Tower (Mars)