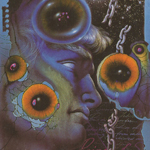 This week sees the third week with a member of the Sword court — this time, the Prince (the Knight in the Rider-Waite Smith deck). In a time that is about breaking out of old beliefs and patterns and setting new ones in the process, the Prince’s presence marks a choice point: do what you have always done, or do something different — namely, nothing.

Between this week, last week, and the week before, we seem to be travelling up and down the hierarchy of the court of Swords. This means that there is an emphasis on your ideas and beliefs, and that both are undergoing some kind of transformation. Prince, Knight, Queen, Prince (Knight, King, Queen, Knight in the Rider-Waite Smith deck): a revisiting, revising, and ironing-out of the creases and wrinkles of perception and misperception. 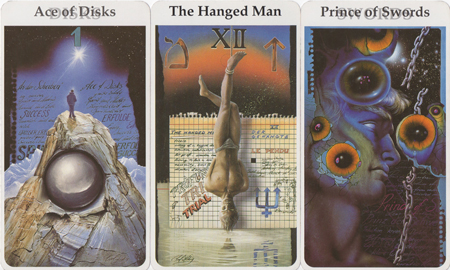 Ace of Disks, The Hanged Man, Prince of Swords from The Röhrig Tarot deck, created by Carl-W. Röhrig. Click on the image for a larger version.

Which thoughts empower you? Which hold power over you?

Do you find yourself, at times, morphing into a hot-head, who believes vehemently in what you are saying, and acting on it with impunity — yet, if you were to drop your sword and take a moment’s breathing space, you might find that you can muster the humility to admit that you are not as free as you think?

I’m under no illusions — and speak from frequent personal experience — when I tell you that this is hard to do. Dropping that Sword to your side — letting go of your certainty — is hard to do. It’s particularly hard when a belief is so much the fabric of who you are that an alternative has never remotely occurred to you. There will be good reason why it hasn’t; and there is good reason why it might be making itself known now.

In the near past, you encountered a possibility. Nascent, yes. The hint of an idea or a vision. A feeling of expansion that swept past you quickly as it ran ahead into the future, leaving a compelling, deeply familiar but as-yet-unknown scent in its wake — one that reminded you of what could be.

The Ace of Disks is the as-yet-untapped pure potential of bringing something into physical existence (Disks are anything we can interact with using our five senses). Whether a project, or money, or a job, a house, a relationship, a partnership, a new product, a new child: the Ace holds in it the seed of a creation. The final suit in the four-suit complement, Disks are the culmination of the properties of the three suits that come before it: Energy (Wands), Emotion (Cups), Intellect (Swords).

But first. Hold on! Whoa!

Just when you thought you were headed straight towards it, whoosh! There you go, stepping unawares into the middle of a circle of rope lying silently on your path — and now you find yourself, upside-down in the forest, the trees close-in around you, a pool of water beneath you.

I know it’s all too easy for me to say this when you’re dangling there, unable to right yourself, your path temporarily waylaid, but I’m going to say it anyway: relax. If you can. This is not a mistake; this is part of the journey to that Ace.

Of all the places this rope could have been, it was lying across your path. It is here for a reason, and so are you. To find something you’ve been looking for but which had eluded you. Perhaps to find something you didn’t even know you were looking for. This rope is not here to inconvenience you. It is here to assist you. You’re being tied up for your own good, in a manner of speaking. If you weren’t, you’d be rushing ahead, and you’d miss a vital piece of equipment you need for the onward journey.

That Ace is still there in the distance. This rope, this suspension of action, is your task-at-hand. Surrender to it. There is nothing else you need to do. Wait, and what is heading for you will come to you. Wait, and find in the space that has been created what has the capacity to shift your belief about who you are, and what it is that you’re doing here, and how it is that you are capable of something that you may not have considered possible.

Hell, you may not have considered it at all. This is self-discovery of a more Zen kind than that Prince is used to — the Prince who wants to get out there, ride on ahead, fight those battles, take no prisoners, make his point clearly, enlighten others with his vast knowledge.

No. Stay still. Stay where you are. Just. A little. Longer.

Hold back, lean in. Just. A little. Further now.

The crest of the hill is coming, and soon the landscape will open enough for you to take your next step.

Until then, hang around, take in what’s here, rest down towards the pool, into a place that feeds you even while you are unaware of it, and be present to what is reflected back to you. No work needed. Listen to the sounds of your own breathing, the rhythmic expansion, contraction, expansion of your life. That is all. It will arrive in the spaces. Then you can better, and more effectively, make your move.

Astrology/Elemental correspondences: Ace of Disks (the pure, limitless potential of earth), The Hanged Man (Neptune), Prince of Swords (the airy aspect of air)