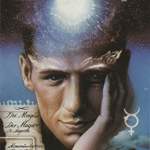 You’ve laid the groundwork; you’ve done the planning. Now, what’s left may be the trickiest, tricksiest thing you’ve had to do yet: to get out of your own way. Sarah Taylor explores the three cards in this week’s reading and introduces the notion of ‘hands-off’ magic. Can you cede control to a part of you that knows what it’s doing but may not feel the need to include you fully in its plans, if at all?

The Prince of Disks, The Magus, and the Ace of Wands. From planning and preparation, to ignition, to fire. This is the journey depicted in the cards in front of us this week — though a more accurate description would be “the potential journey”: an Ace, while powerful, refers to what is available, but which doesn’t necessarily have to be acknowledged or used. 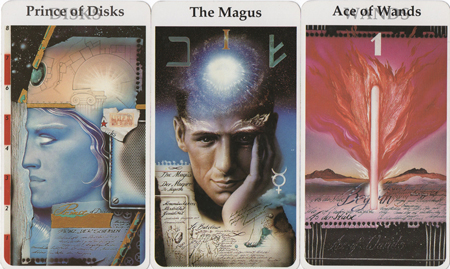 Prince of Disks, The Magus, Ace of Wands from The Röhrig Tarot deck, created by Carl-W. Röhrig. Click on the image for a larger version.

There are single figures on the first two cards, and no figures on the third. It’s you, in collaboration with a force that, as The Magus, you are fully equipped to draw from, but which you may opt not to harness at all, whether deliberately or by default. In other words, the power of these three cards in combination is in your hands. No-one else’s. Or no other human’s, anyway. But we’ll get to that a little later.

The Prince of Disks is the Röhrig equivalent of the Knight of Pentacles in the Rider-Waite Smith tarot deck. He is the venturing, questing energy of Disks, or earth — anything that we experience in material form. Lying at the further end of the spectrum to Wands (fire, Eros, creativity; significantly less tangible), the Prince of Disks’ realm is one that is denser, slower to action and yet with the potential to stick around for a while.

Looking at the image on the Prince’s crown, he is an architect. He holds the blueprints, and it’s his job to go out and look for the best materials for the job. He is a visionary, and also an idealist, being younger than both the Queen and the Knight (the King). He is persistent — perhaps even stubborn. This stubbornness can serve him very well at times, though, because without this dogged pursuit of the plans in his mind, and the tenacity to see them through, nothing would get made — or nothing of much (personal) value anyway.

There is an interesting parallel between the Prince of Disks and The Magus; and a fundamental difference too.

The parallel is the light source in each picture, both associated with the figures’ crowns. With the Prince, the light is more contained, sitting at the heart of the plans of what looks like an amphitheatre. Performance; a place where one’s mettle is tested; a place where one has the chance to shine.

With The Magus, that light has turned supernova. Or, to put it another way: when taken in sequence with last week’s reading, the zero point field of The Fool has exploded into matter with the arrival of The Magus. Card 0 (The Fool) in the major arcana is now followed by Card 1 (The Magus). Binary. We exist in a universe defined by duality.

As The Magus, your plans can now be implemented because you are a master-implementer. As magician, you can draw your vision into existence. The slower methodology reflected in the more contained light of the Prince of Disks, has become fibreoptic — zipping along a creative continuum at a rate of knots that demands the kind of mental dexterity and access to invisible states of creativity that The Magus, as Mercury, is made for.

As an aspect of your personality — the one that endeavours and endures — The Prince of Disks has laid the groundwork for the current spell that lies on the crafting table in front of you. Now, as a Soul-based archetype, an aspect of you that is not limited to your personality-based, human form — The Magus — is asking to be given the space to do what it does best.

The catch? You may not be entirely in the know as to the when, how, and why of this process.

The reason for this is that an archetype acts behind the scenes and under the surface. It is not wholly accessible to our immediate state of consciousness, if at all. We may sense its presence; we may feel its energy moving through us; we may sometimes know what it is that is pulling us to some aspect of Soul work. (Sometimes we may choose to call one in or to partner with it in an act of alchemy with equally unpredictable results.)

When an archetype does become known to us, we can either 1) ignore it, 2) try to guide or steer it, or 3) let go and ride with it. I’d suggest that the third option is the one that we are least inclined to trust or to follow.

An invitation: why not sit down for a minute or two and look into the eyes of The Magus looking at you? What do you see? What does he see in you? What is his expression telling you about what needs to start, given that you’ve been planning for long enough? Where is it that letting go (of doubts, preconceptions, ingrained habits) and seeing what happens may serve you?

Because the final card, the Ace, is yet another “1” card. Baby, if you had ignition before, now you have twice the fire. But only if you reach up and take it. This can be a tricky thing to do; there is something deeply entrenched in our psyches about taking fire and the consequences associated with that (Prometheus, anyone?).

Except here, if there is balance, then the story is different. You are fully equipped to play with those matches. First, you have a meticulously planned grounding and sense of responsibility. Second, you have the activation of an archetype whose primary role is to wield a wand (and a cup, a sword and a disk, for that matter). Third, the presence of the Ace means that it is a gift that is being extended to you — or soon will be.

Bear that word in mind: “gift.” A gift in its literal sense has no conditions attached to it. It is given, pure and simple. All you need to do is to take it. The time is coming, and if you’re not sure you’ll know when that is, then maybe it’s time to stop thinking you need to know. Maybe a part of you — the one looking at you from the centre of the reading, the most tangible he may ever be — knows just fine.

Astrology/Elemental correspondences: Prince of Disks (the airy aspect of earth), The Magus (Mercury), Ace of Wands (the pure, limitless potential of fire)