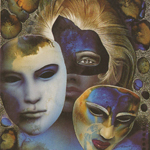 Sarah Taylor explores the relationship between the Prince of Swords in last week’s reading, and the Knight of Swords in this one, and the appearance of not one, but three, court cards. Who you believed you were, and how you are beginning to experience yourself now, may offer a contrast. Let the light of your own awareness and discernment guide you towards parts of yourself that have been waiting patiently to make themselves known.

Where the Prince of Swords (the Knight in the Rider-Waite Smith deck) stood last week, broken free from his chains, we now see the Knight of Swords (the King in the RWS deck): the Röhrig Tarot’s depiction of the mature masculine in his highest potential — and here, the masculine that corresponds with the mind. Wise. Discerning. Focused. The precise, effective wielding of the intellect. Solomonic. 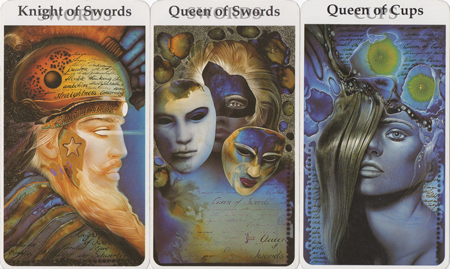 Whereas the Prince is externally focused, a fighter — sometimes a hothead ranging into zeal with his sword of personal truth — the Knight holds the ability to be a custodian of a higher truth. If you look at his eyes, yes, they are open and a beam of light is trained on the cards next to him; yet there is an inner quality to his sight as well. His vision is held within; it is not exclusively externalised.

Additionally, the gem on the front of the circlet on his forehead is similarly illuminated. Vision is correlated with the “third eye” — the seat of non-embodied intuition. It is the masculine form of intuition — a connecting with spirit (light) as opposed to soul (the dark, the feminine).

Let’s look at some of the words on the Knight’s helm (a further association with all things ‘head’-related):

The Knight of Swords is focused, but not so much on the physical ‘things’ around him as on the qualities that those things represent. Here: the Queens of Swords and Cups. The feminine counterparts to the Knight, representing the mind and the heart respectively.

All-in-all, we have three aspects of your personality that are active and taking centre stage in your life right now. In you right now — although they may also come in the shape of another or others. And the Knight is the initiator. Or, more accurately, the directed use of the mind and the ability to analyse with detachment and skill are available to you, and they are responsible for bringing light to other parts of yourself.

Through the Knight’s gaze, you are in the process of unveiling and coming face-to-face with sides to you that have kept themselves shrouded for some time now. Perhaps for some considerable time. It has taken your increased skill in putting yourself under the spotlight of scrutiny to meet the Queens. It has taken them time to feel safe enough with that scrutinising aspect of yourself — the one that used to cut so harshly at times — to reveal what they had kept closed off from you. It is a liberation that cuts across your ideas of gender, your preconceptions of relating and relatedness, your until-now inflexible ideas of who you are — of who you have been all along if you had had the eyes to see.

A receptive, intuitive mind-based knowingness, sharp in her own right — sharp as a blade — but frequently so misunderstood as to be rendered invisible: the Queen of Swords. A watery, mutable mystery that hid, mermaid-like, unable and unwilling to venture onto a land that felt inhospitable, and who, until now, had been asked to pay too high a price for safe passage: the Queen of Cups.

It’s funny how tarot works: it is only now that I notice the striking similarities between the two Queens. The other two Queens — Disks and Wands — do not resemble these at all, so it isn’t something that is common to the entire Queenly complement.

With these similarities in mind, I am drawn to suggest that what we are looking at here is a marriage of head and heart. It is as simple and as complex as that.

Your task: to stay aware of not favouring one over the other; to deny neither. And to maintain a sense of objective appraisal of yourself as you hold that gently uncompromising spotlight — or, if you are not able to do that, to seek an objective appraiser to work with you, whether a trusted friend or a therapist.

Masks are falling, no longer needed. The depths are blooming on the surface, ready to make themselves known. The mind expands, the heart opens.

You are the light-bringer, the bridge-builder as all three aspects of you working together. It is a sacred marriage, each part critical, the whole greater than their sum. How beautiful is that?