One day after the Sun ingressed Taurus — sign of material wealth from the earth (and ruled by Venus, which is heading for the Uranus-Eris conjunction this weekend) — the U.S. Treasury has announced that five women will grace the back of the $10 bill. Harriet Tubman will replace slave-owning former president Andrew Jackson on the face of a new $20 bill.

One day after the Sun ingressed Taurus — sign of material wealth and resources from the earth — the U.S. Treasury has announced that five women will grace the back of the $10 bill (Alexander Hamilton will remain on the front, perhaps helped in part by the smash-hit Broadway musical Hamilton.). Harriet Tubman, an African-American former slave who helped approximately 70 slaves to freedom, will replace slave-owning former president Andrew Jackson on the face of a new $20 bill. 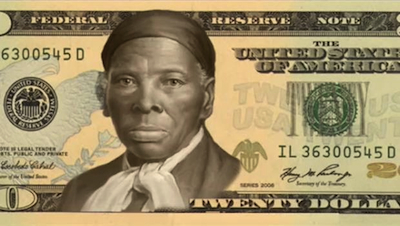 According to The New York Times, other depictions of women and civil rights leaders will also be part of new currency designs.

What makes the timing of this announcement especially stunning is that Venus is heading for conjunctions to Uranus on Friday (just hours after the Scorpio Full Moon) and to Eris on Sunday. This puts Venus, ruler of Taurus and goddess of love, the feminine principle and, yes — MONEY — smack-dab into the Uranus-Eris conjunction, which is exact June 9.

It looks from here as though this confluence of Venus, Uranus and Eris is being illustrated by a significant, tangible and for many people perhaps unexpected change to one particular symbol of national identity: our currency. It’s a concrete, cultural phenomenon. And while it will not automatically make everyone think more inclusively, visual symbols have power. It is harder to ignore the role of women in shaping a nation when their faces look back at you each time you pay for groceries or gas for your car.

This most recent campaign to get women’s faces on U.S. currency began in late 2014 or early 2015, as a viral online campaign (how Uranus!) spearheaded by Barbara Ortiz Howard, the owner of an exterior restoration company, and Susan Ades Stone, a journalist. An article in The Atlantic from March of last year describes the process and includes an interview with these two founders of Women on $20s. Apparently changing the portraits on currency is at the sole discretion of the Treasury secretary and needs no Congressional approval.

That said, to date, only two women have appeared on U.S. currency in the Treasury’s history: the Susan B. Anthony dollar coin, minted from 1979 to 1981; and the Sacagawea dollar, minted every year since 2000. Although, according to Wikipedia, the Sacagawea dollar “[has not been] released for general circulation from 2002 through 2008 and again from 2012 onward due to its general unpopularity with the public and low business demand for the coin.”

Martha Washington previously was the only woman whose portrait has appeared on U.S. paper currency. It appeared on $1 Silver Certificates, Series 1886, 1891 and 1896. Also, apparently Pocahontas appears in the engraving “Introduction of the Old World to the New World,” which was featured on several pieces of American currency. Only one Native American, Running Antelope (a Sioux chief) seems to have appeared on U.S. currency, on the $5 Silver Certificate in 1899. (See list of banknote portraits here.)

The additional bill redesigns will reportedly be announced in 2020, in time for the centennial of woman’s suffrage and the 19th Amendment to the Constitution.

The Times notes that, “It was unclear whether details of the unexpectedly sweeping changes would mollify some women’s groups, who had excoriated Treasury Secretary Jacob J. Lew for reneging on his 10-month-old commitment to put a woman on the face of the $10 bill, which is the one currently in line for an anti-counterfeiting makeover.”

Apparently there’s still no business like show business, at least in terms of Pres. Hamilton’s reprieve (he was also the first Treasury secretary). It remains to be seen whether Eris has any tricks up her sleeve regarding Lew’s backtracking on his commitment, or whether Venus in the mix will offer some receptivity.

4 thoughts on “Venus and Eris take on Uranus: Women to be on US currency”