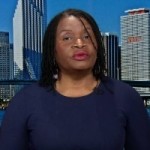 The Haitian-American community is now facing a looming deportation deadline. Up to 55,000 Haitians could be forcefully repatriated to their fragile, struggling homeland if the Trump administration refuses to extend a temporary protected status that has allowed them to legally reside and work in the U.S. after an earthquake devastated Haiti in 2010.

Up to 55,000 Haitians Face Deportation If Trump Refuses to Extend Temporary Protected Status
The Haitian-American community is now facing a looming deportation deadline. Up to 55,000 Haitians could be forcefully repatriated to their fragile, struggling homeland if the Trump administration refuses to extend a temporary protected status that has allowed them to legally reside and work in the U.S. after an earthquake devastated Haiti in 2010. Haitians’ temporary protected status, or TPS, is set to expire on July 22. Immigrant rights advocates say Haiti is still reeling from Hurricane Matthew, which, in October 2016, destroyed the country’s southwest peninsula. The hurricane killed more than 1,000 people and decimated villages and farmland. Haiti is also suffering from a devastating cholera epidemic that erupted after the earthquake.

Journalist Anand Gopal: The Sheer Brutality of the Assad Regime Has Led People to Join ISIS
President Trump and Russian President Vladimir Putin agreed Tuesday during a phone call to work together to seek a ceasefire in Syria. The phone call came the same day ISIS militants attacked a makeshift camp for displaced Syrians and Iraqi refugees, killing nearly 40 civilians and Kurdish fighters near Syria’s northeastern border with Iraq. Meanwhile, Human Rights Watch has concluded that Syrian government forces have used chemical nerve agents, such as sarin gas, in attacks at least four times in recent months, including in the April attack that killed 86 people, including dozens of children. Human Rights Watch said new evidence, including photos and videos of weapon remnants, suggests the April attack came from a Soviet-made, air-dropped chemical bomb specifically designed to deliver sarin.

NC Lawmakers Side with Factory Farms as Communities of Color Suffer from the Spraying of Hog Manure
In eastern North Carolina, residents are battling with one of the state’s largest industries: hog farms. Last week, North Carolina lawmakers passed House Bill 467, which limits the damages that residents could collect against hog farms. The billion-dollar industry is primarily clustered in the eastern part of the state, where hog farms collect billions of gallons of untreated pig feces and urine in what are essentially cesspools, then dispose of the waste by spraying it into the air. Residents living in the area of the spray complain of adverse health effects and odor so bad that it limits their ability to be outdoors.