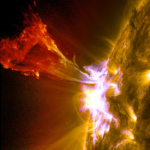 Sunday, June 21, is the longest day of the year here in the Northern Hemisphere. As such, the Sun ingressed the sign Cancer at 12:38 pm (16:38 UTC) EDT Sunday. The Moon then ingressed Virgo a few minutes later. This is an interesting, even spectacular chart, and much in the planetary landscape has changed the […]

Sunday, June 21, is the longest day of the year here in the Northern Hemisphere. As such, the Sun ingressed the sign Cancer at 12:38 pm (16:38 UTC) EDT Sunday. The Moon then ingressed Virgo a few minutes later. 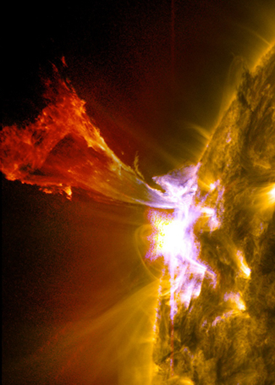 Solar prominence (mid-level flare) photographed in May of 2013. We are experiencing similar flares now, cascading the Earth.

This is an interesting, even spectacular chart, and much in the planetary landscape has changed the past week or so. Saturn has retrograded back for its Scorpio encore. Venus and Jupiter are making a glorious visible conjunction in the sky (check it out).

And the recent Mercury retrograde is finally wriggling itself out of the mental and emotional bog. You have half a chance to gain some clarity this week, at long last.

There is more astrology yet to come. As mentioned, Mars remains in Gemini, where it’s been since May 11 (well before Mercury retrograde began).

It’s now fewer than two degrees away from Cancer, which means it’s both making a sign change and a square to the Aries Point; Mars arrives there Tuesday. So this solstice will occur in two stages — today’s Ingress of the Sun into a new sign, a new quadrant and an aspect to the Aries Point; and then Mars doing the same thing in less than two days.

When Mars makes its move, the Mercury-Neptune square is also exact, and begins to separate. That, too, will come with a surge of energy and the sensation of slipping out of something, waking up or some drug wearing off — one you didn’t know you took.

So we get an extended experience of solstice, one that will come in a couple of distinct stages, the first of which we are in now, and the second of which takes hold as Mars slips out of Gemini and into its new sign. Mars and the Sun will be in a few-degree conjunction for a while, which will offer a surge of wake-up energy. That will come as a relief to the ongoing soporific of Mercury-Neptune.

Gather your momentum gradually and steadily. No need to lurch into new territory — just point yourself there and and guide yourself in the direction you want to go. If you’re going for something especially challenging, help is indeed on the way.

Also of note, we are currently experiencing solar eruptions. My colleague, mentor and comrade-de-plume Carol van Strum informs me of these things whenever they happen, though I have not been able to get a reading on them as they influence the psyche. I’ve heard different effects described, and I’m curious if you’ve noticed anything over time when these eruptions happen.

You may read Obscured by Clouds, last week’s article about the solstice. I’ve opened up access to all readers, no registration required. I’ve also done an edition of Planet Waves TV that sums up the solstice, and Mercury square Neptune.