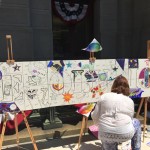 There is a phrase popular among progressive activists for use in chants and hashtags: “This Is What Democracy Looks Like.” It is a call to remember that protests, resistance, and speaking truth to power are healthy aspects of a society whose government is intended to reflect the will of the people. 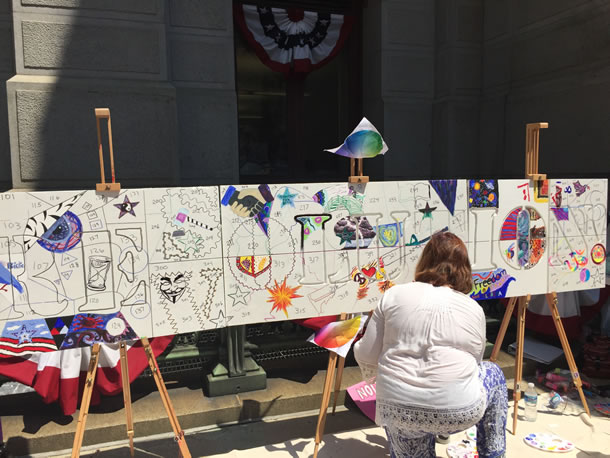 A public work of art outside of City Hall in Philadelphia – everyone was invited to contribute.
Photo by Amy Jacobs.

There is a phrase popular among progressive activists for use in chants and hashtags: “This Is What Democracy Looks Like.”  It is a call to remember that protests, resistance, and speaking truth to power are healthy aspects of a society whose government is intended to reflect the will of the people.

This phrase was echoing in my head over the past few days as I watched thousands of people swarming the streets around City Hall, camping in FDR Park, and banging on the fence outside of the Wells Fargo Convention Center. 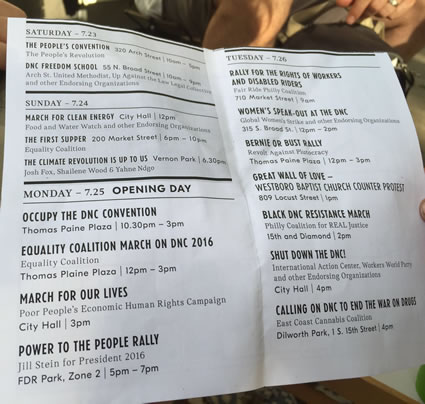 A flyer circulated at the DNC by a group called Philly.FYI, which made a valiant attempt to keep straight the long list of protests and marches scheduled over the week. Photo credit: Unknow.

I know some who would argue that our perceived democracy is a façade; I know others who would say the protesters could contribute more effectively by going home and channeling their rage into local politics and community building.

Differing opinions aside, there is no denying that this is democracy in action—at least, perhaps, it is the best that this corner of humanity can do in this moment.

On Monday afternoon, the UpToUs crew put out a heartfelt video on social media pleading with Bernie Sanders to follow the call of his supporters and run for president. I was surprised, as the group had actually avoided taking any political stances until this one, and had emphasized the concept that “this is about a personal revolution, not a political one.” Regardless of one’s opinion on that idea, the video is worth a watch, as it represents a common sentiment among people on the front lines.

Meanwhile, Jill Stein, the Green Party’s presidential candidate, spoke to a crowd in the park outside of the convention, where she announced that her party was “ready to embrace the refugees of DNC tyranny.” Speaking to disappointed Bernie Sanders’ supporters, she said “do not give up. The revolution has a home with the Green Party.” People held Green Party placards and chanted “Jill not Hill!” when she stepped onto the stage.

At around 6pm, a massive thunderstorm arrived and the park was evacuated. Protesters ran through the rain with their posters covering their heads; the line to buy tokens for the subway stretched down the block. Stein’s speech was cut short, and the outdoor concert planned for later that night was cancelled. Videos were of Bernie being booed by his own delegates as he asked them to support Hillary Clinton were starting to circulate. Although there were no signs of violence, the storm sparked a feeling of chaos. I was grateful to return to the sanctuary of my car.

I stayed in Philadelphia until Tuesday evening, when my exhaustion barometer signaled that it was reaching its limit both physically and mentally. I have since taken a step back and begun the process of recharging my body and reintegrating my mind.  There are so many stories I haven’t told and so many lessons I haven’t articulated, but glimpses of how my experience fits into the bigger picture of this country and this moment in history have started to emerge. I look forward to sharing them with you in a cohesive final article sometime in the coming week. 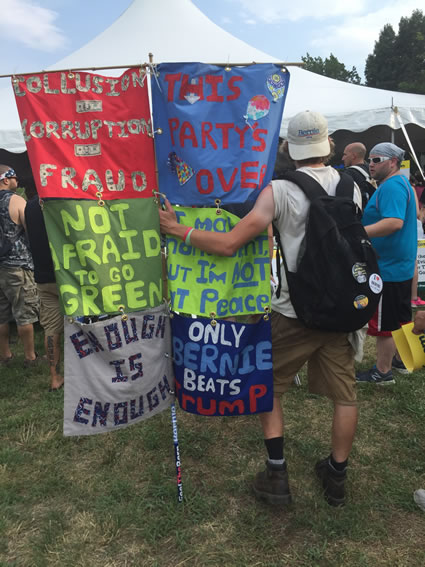 One person, many statements: an activist waiting for Jill Stein to speak in FDR Park on Monday. Photo by Amy Jacobs.

Meanwhile, I will close with a short thought:

I spoke with a well-traveled man in a coffeeshop near City Hall who reminded me that in so many parts of the world, these types of protests are not tolerated at all and are shut down with violence.

There is a strong police presence in Philly of course, and there are many protesters whose reasons for being there may not stand up to a test of rationality. We know that the injustice stretches back centuries (truly, through all of recorded human history), and that no single candidate, convention, or piece of legislation can be the whole solution.

We are where we are, in our current phase of existence and growth. We may not be satisfied with it—but I believe it is healthy and empowering to remind ourselves that “this is what democracy looks like.”

We have to continue to evolve, but we would be wise to also appreciate what we have.