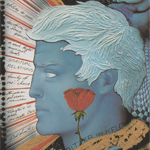 In some way, you have experienced something not working out the way you had planned or hoped. Your efforts appear to have blocked the Sun. You sit, small, beneath. It is a moment of humbling. But what if there were no accidents? How about looking more closely?

This week the cards are very clear; as clear as the sense of defeat and pain that they relate; and equally clear about the way that is available to you that moves you through both and towards something different. 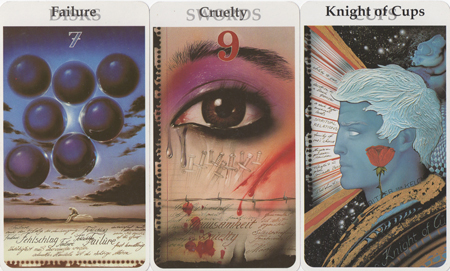 Seven of Disks, Nine of Swords, Knight of Cups from the Röhrig Tarot deck, created by Carl-W. Röhrig. Click on the image for a larger version.

At the centre of the reading lies the Nine of Swords. Also known in this deck as Cruelty, the image of the Nine of Swords is its own effective description: an eye, its makeup belying the bloodshot veins that run through it, and the open wounds on the cheek below it.

Tears have been shed — are still being shed. There is injury: emotional, physical — in other words, the pain is visceral. It isn’t simply a matter of “I feel hurt.” In this case, “I am hurt,” and it is a phrase that can be taken two ways: first, describing a sense of self-injury; second, describing oneself as the embodiment of pain.

The Nine of Swords describes a sense of cruelty to oneself (written on the card) that is then projected onto the surrounding world. It is anguish writ large in how we experience ourselves and then our interactions with others. When we experience the kind of pain described by the Nine of Swords, we become its agent. Remember that Swords are associated with the mind; and so we turn pain into a belief about who we are, and what the world is in response to us. And so we, too, respond to that world with “heart less passions,” “fanaticism,” “passive opposition,” “martyrism [sic],” “vengeance.” It is a (very) vicious cycle.

Why has this happened? This is suggested in the preceding card, the Seven of Disks.

In some way, you have experienced something not working out the way you had planned or hoped. Your efforts appear to have blocked the Sun. You sit, small, beneath. It is a moment of humbling.

But what if there were no accidents? How about looking at the Seven of Disks more closely in this instance? The sky is, for the most part, clear, soft, and dappled with clouds. The Sun hasn’t disappeared; it is only obscured. But a part of you believes that you have somehow caused the Sun to disappear, when in reality you are not that powerful, and what you are seeing is described by the metaphor depicted in the card: just a passing cloud.

Yet you take it so seriously! So seriously that, perhaps, you have forgotten the courage that it took to embark on your endeavour in the first place. What courage that you even tried! The pain has come from identifying yourself with it so fully that it became its own belief system, an act of total self-definition.

But the Knight of Cups offers the antidote to the cycle of cruelty in which you find yourself enmeshed. His presence is a response to it on all levels. Where there are heart less passions, he brings higher emotional levels; where there is fanaticism, he offers devotion to a loved person; where there is passive opposition, he embodies the ability to give; where there is vengeance, he responds with spiritual relations. There is a St. Francis of Assisi aspect to the card that becomes very clear here: when you are revealed in the gaze of the Knight of Cups — when you look upon yourself and your world with different eyes — you become a channel for peace.

Maybe it is in this moment that you realise your project wasn’t the failure you thought it to be after all.

Astrology/Elemental correspondences: Seven of Disks (Saturn in Taurus), Nine of Swords (Mars in Gemini), Knight of Cups (the fiery aspect of water)