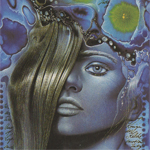 From a masculine reading last week, to a predominantly feminine reading today, with our protagonist — the card I drew first — at centre: the Queen of Cups. 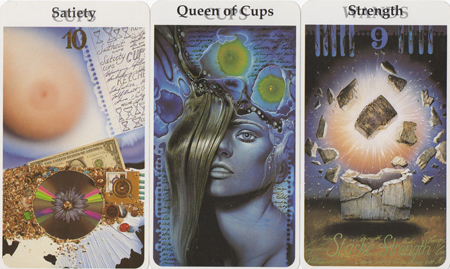 Ten of Cups, Queen of Cups, Nine of Wands from the Röhrig Tarot deck, created by Carl-W. Röhrig. Click on the image for a larger version.

The Queen of Cups is the watery aspect of water. Her elemental correspondence demonstrates clearly that she is at home in the depths: of emotion, and of the unconscious. Her environment is the amniotic fluid from which your experience of yourself as a sentient, feeling-based, receptive being is birthed. You are held in the gaze of the nurturer; and you, as the Queen, are the nurturer who holds the other in your gaze.

Or, perhaps more pertinent questions: when did “seductive” take on the mantle of negativity that it so often wears — an aspect of the Shadow Queen that we have consigned to the darkness — and at what point were these two aspects of womanhood separated? The Queen of Cups in the Röhrig deck, as far as I can see it, clearly reunites the ‘madonna’ and the ‘whore’ into one beautiful, rounded card.

As such, the Queen in her highest expression is the individuated feminine who is complete in her own right, and it is this balance between two seemingly mutually exclusive qualities (in our society at least) that signifies the arrival of an inner balance that is now manifesting through you. The particular form it takes is written on the card:

“motherhood,” “emotional integrity,” “as above as below,” “feelings are shown openly.”

The Queen is unafraid to be who she is. You, too, have the wherewithal to be fearlessly yourself, and this stems from a level of nurturing and care that forms the foundation of the reading, in the Ten of Cups.

The Ten of Cups is also known as “Satiety” — fulfilment, or the state of being “sated.” As the last numbered card in its suit, it is replete with the quality of Cups. Like a child who has suckled its fill at the breast, so you turn from the Ten of Cups, and into a change that is inevitable when something has approached saturation point.

It is here that the Martian energy of the Ten of Cups (which corresponds with Mars in Pisces) takes over and shifts the energy. Becoming the Queen dissolves an internal block or stalemate in a burst of light in the Nine of Wands, and life changes gears once more. However, you don’t leave the Queen behind; she remains a part of your consciousness. It is her presence as one who is entirely at home charting the emotional complexity of who it is to be you that is instrumental in removing an obstacle that had stymied you — until now.

Where there was a paradox that held you in place, now you have the ability to step forward. You never did need to be either one thing or another; you finally see that a third choice was staring you in the face all the time. Now it’s on to the next adventure.

Astrology/Elemental correspondences: Ten of Cups (Mars in Pisces), Queen of Cups (the watery aspect of water), Nine of Wands (Moon in Sagittarius)