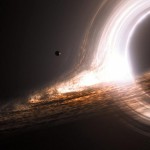 There is no looking to astrology to explain two mass shootings in 24 hours, or the 36 of them in the United States so far this year. Or the 100 or so really nasty ones since 1966 (which seem to be concentrating in our era). 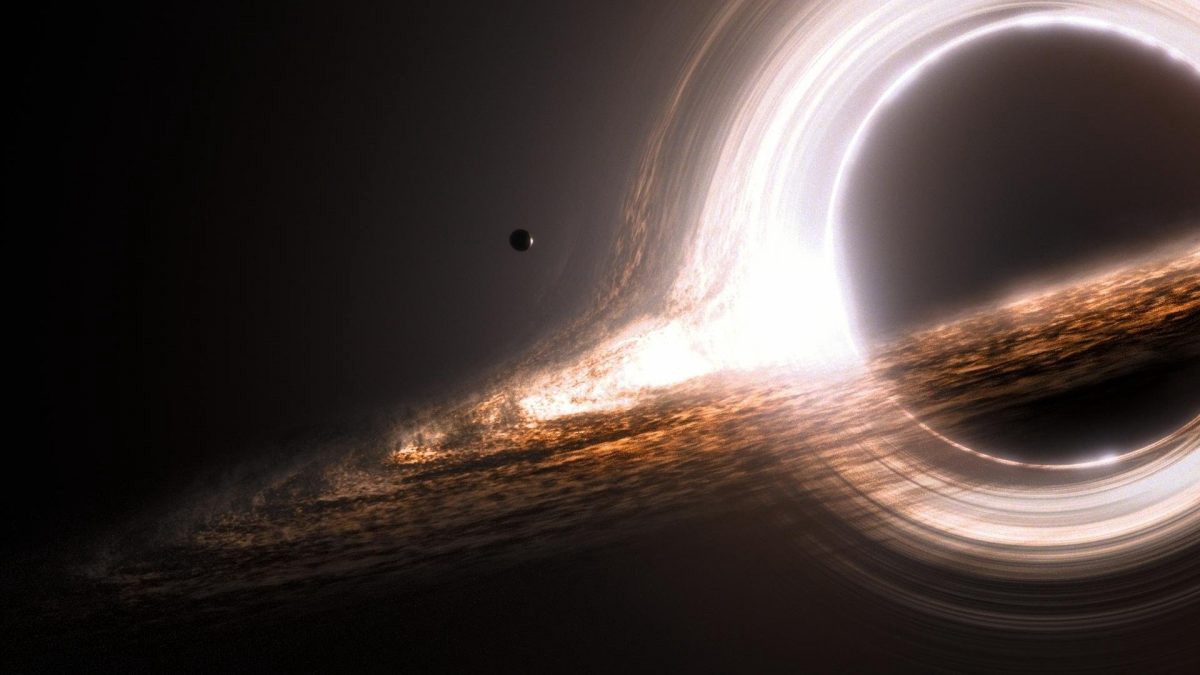 The most visualized black hole of all, as illustrated in the movie Interstellar, shows a predicted event horizon fairly accurately for a very specific class of rotating black holes. Deep within the gravitational well, time passes at a different rate for observers than it does for us far outside of it.

There is no looking to astrology to explain two mass shootings in 24 hours, or the 36 of them in the United States so far this year. Or the 100 or so really nasty ones since 1966 (which seem to be concentrating in our era). There’s also no denying that our nation needs to change — and that nobody seems to know how to do it, or how to agree on what the problem is, or might be. [You may listen to my special audio comment on El Paso here.]

It’s not mass shootings. It’s not merely too many guns, or that the easiest thing to purchase besides one is a politician. It’s that we’re dealing with a blind spot, which affects everyone and everything. 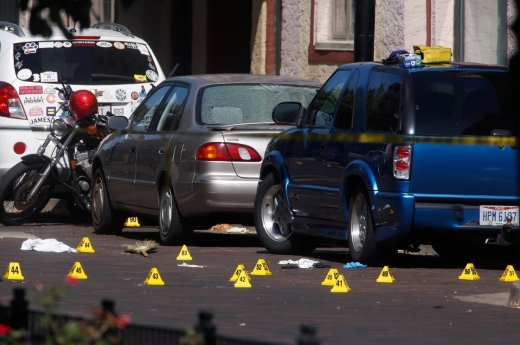 A Toyota with a shattered back windshield sits parked at the scene of the mass shooting in Dayton, Ohio. The markers are a record of where bodies fell. Photo by Luke Sharrett for The New York Times.

It’s the same blind spot where Greenland and Antarctica are melting and where all the single-use plastic goes and where hundreds of contacts with the Russians equals no collusion. It’s the one where getting fewer votes means winning the election.

It’s the same zone where, “The body is everywhere assaulted by all of our new media, a state which has resulted in deep disorientation of intellect and destabilization of culture throughout the world. In the age of disembodied communication, the meaning and significance and experience of the body is utterly transformed and distorted.”

This would also mean that the meaning and significance of 40,000 of those bodies each year being shot and killed by bullets would also be utterly transformed and distorted. Remember that for nearly everyone, a mass shooting is an event on TV or coming over the news feed on their phone, along with notifications about the new Dragon Ball Legends update.

Speaking of the body, maybe that’s the same cosmic vortex where the best health care program in the world — something really terrific — is no health care program at all, where the bill for a sprained ankle is $10,000. In order to change this, the people who have health insurance will have to be the ones who speak up for those who do not. That would mean caring.

South Park was right when they proposed we’re at the point where the proper way to handle mass shootings is to not get so upset about them. Caring too much would be “anti-environment” — it would call attention the blind spot itself. Then everyone else will feel awkward, like they might fall in.

Today The Onion was back with its running joke that goes on their front page every time there’s another one of these things: ‘No Way To Prevent This,’ Says Only Nation Where This Regularly Happens.

Saturday, I sent a memo around to our editing team raising the question of whether these shootings are an undeclared war on the people. We think of them as a product of the environment rather than a conscious design, but I keep wondering whether there’s a budget, a schedule and a recruitment program. 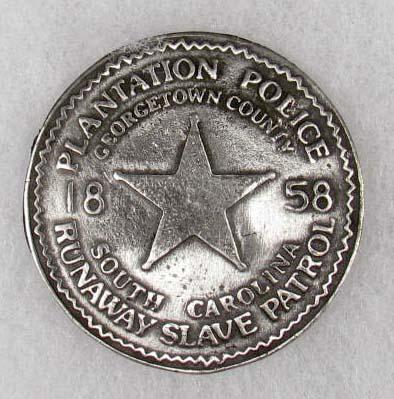 An official shield of a runaway slave patrol, from 1858 in South Carolina. These slave patrols were the purpose of the Second Amendment, which protected their right to carry weapons.

Maybe it’s not just that the 2nd Amendment is still around, despite being a relic of 18th and 19th century slave patrols — that’s the “well ordered militia” it references: posses hunting for people who escaped from enslavement.

The government itself does not need the Constitution to grant it permission to arm its own military or police. Citizens on horseback looking for runaways in Virginia do, however; that was the deal cut at the time of ratification. The “strange wording” of the 2nd Amendment (as The New York Times once described it) is not so strange when you know that.

In response to my question about the undeclared war, Amy Elliott, our correspondent in Britain, wrote:

“From my outsider perspective, it appears to me barbaric that school children should need to participate in active shooter drills. The existence of the drills alone suggests to me that school shootings (and mass shootings) are now an accepted risk.

“The payoff for political leaders consists of how human beings respond to stress, which in America is exacerbated by the lack of public healthcare, absence of environmental safety, and horrendous job insecurity. It’s as if America has, through successive governments, engineered a situation in which people are constantly one step away from disaster.

“That provokes in most people a stress response, in the sense of focusing intensely on one’s own survival and the survival of loved ones, and living day-to-day, trying to avoid the nasty pitfalls surrounding them. There is no safety, unless in being exceptionally rich. All one can really do is hope for an improvement.”

That’s the problem. You’re probably not exceptionally rich enough to afford a security detail, and hope is useless.

In Context: Saturn, Pluto and the U.S. Pluto Return

One thing we can say vis-a-vis the astrology is that everything happening now, in these days, exists in the context of the Saturn-Pluto conjunction. A mass shooting today is not what one was five years ago, or two. The Greenland ice sheet poured 194 billion tons of water into the North Atlantic in July alone; that does not mean the same thing as it might have last year or the year before.

We are much closer to the singularity point than we were: that of the Saturn-Pluto conjunction. And this already rare aspect has an even more unusual backdrop: the first-ever Pluto return of the United States, as it happens just once every 248 years. With every passing day, the density, gravity and impact of events increases. So too does the impact of zoning out, not paying attention or sleepwalking. And while we’re at it, we could speculate that the power and influence of the people — the millions — one of the original delineations of Pluto — will have a greater impact. 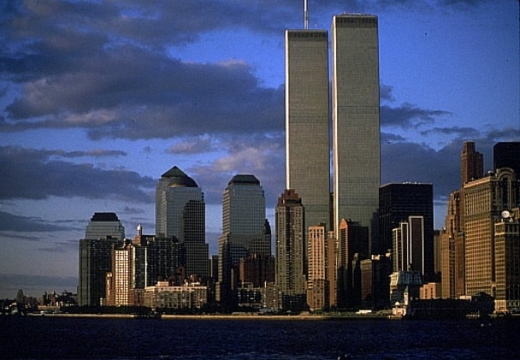 The original Twin Towers of the World Trade Center.

Billy Name, Andy Warhol’s personal photographer and a devoted astrology student, said after the 9/11 incident that only Pluto (in aspect to Saturn) “could drop the World Trade Center like marionettes.”

In his 2006 book Cosmos and Psyche, Richard Tarnas characterizes the Saturn-Pluto cycle as one of crisis and contraction. It tends to bring out the dark sides of both Saturn and Pluto. This cycle was active at the outset of World War I (the conjunction, in 1914), and the outset of World War II (the square in 1940 presaging United States involvement). The conjunction of 1947 describes the Cold War.

There was an opposition at the peak of the 1960s, which is partly why that era had the feeling of a crackdown as much as an uprising. The conjunction was back in 1982 with the Reagan Revolution and the birth of neo-conservatism, and then the next opposition came within a month of the Sept. 11 incident.

Tarnas writes that Saturn-Pluto aspects come with a “widespread sense that one’s life was determined and constrained by large impersonal forces of many kinds — historical, political, military, social, economic, judicial, biological, elemental, instinctual — too powerful and dominant to be affected by the individual self. This sense of vulnerability was in turn regularly matched by a drive for power, control and domination.”

Further, “Experiences of deep humiliation caused by violence, violation and defeat were thus often accompanied by a compensatory need to prove one’s steely strength, invulnerability and capacity to retaliate with lethal potency.”

And somewhat more reassuringly, he adds: “Saturn-Pluto alignment periods are also characterized by displays of personal and collective determination, unbending will, courage and sacrifice, by intensely focused, silent, strenuous effort in the face of danger and death; by a deepening capacity for moral discernment born from experience and suffering; and by the transformation and forging of enduring structures, whether material, political or psychological.”

I do like the bit about deepening capacity for moral discernment. Let’s get that one going. A little will take us a long way. We are approaching the vortex, the point of maximum density. Remember, we are living right next to a black hole, which is bending everything around it — and we’re approaching the moment of singularity.

Said another way, there is no going back; there is only going through. 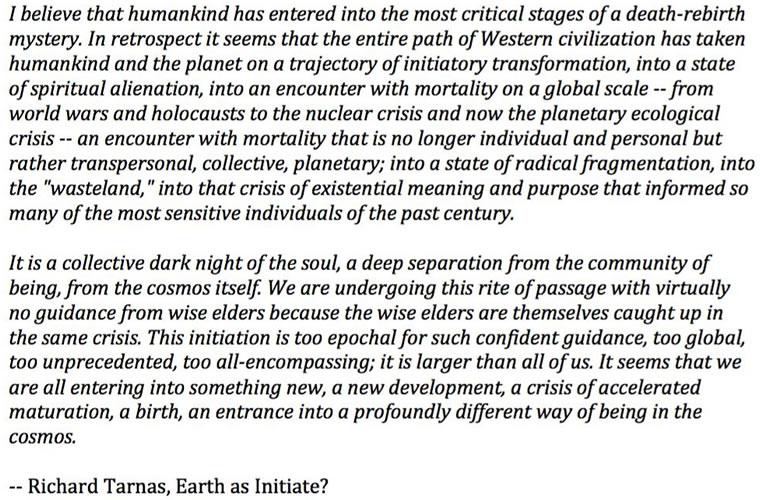 One thought on “The Singularity Point”