Links to images used during class 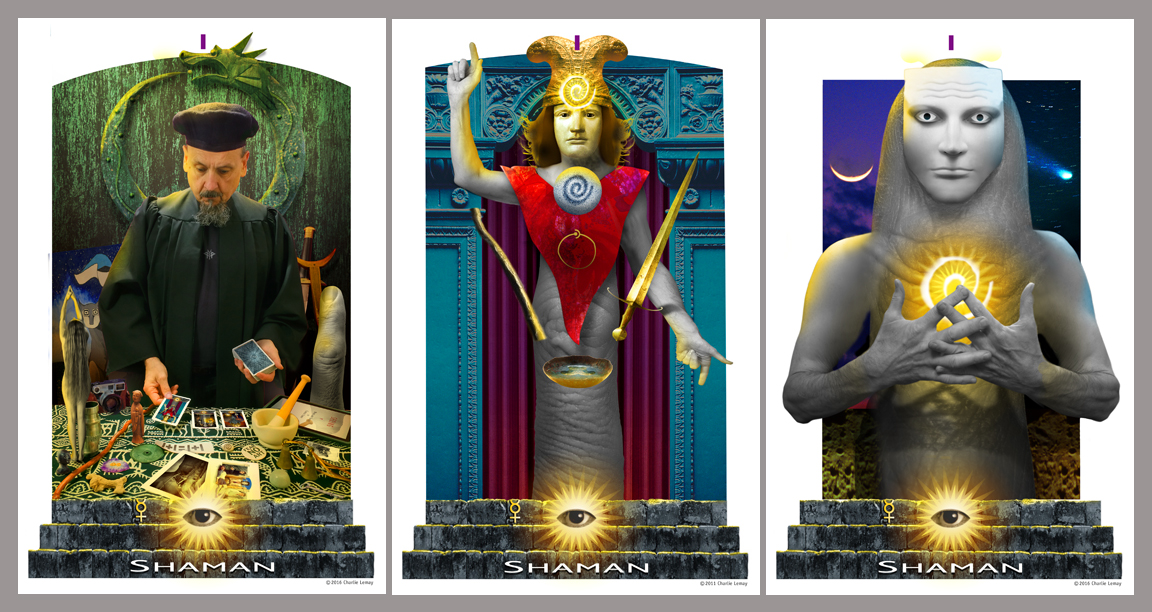 Shaman, from Charlie Lemay’s deck. Charlie says: “Called Shaman in my deck, it occurred to me last year that my Digital Theatre image Ouroboros, which came as a dream in 2010 and was later completed in 2013 after my Tarot was created, was actually a precursor to my Tarot, which came a year later in 2011. Since I made my deck the same size as the Crowley Thoth deck, which has 3 Magus cards, I thought this would be appropriate. The third Shaman comes from my Digital Theatre piece, Awareness, made in 2014. Maybe it was waiting for this completion before publication could occur. So here they are and you are the first to see all three. Your comments are welcome.”

From Eric: Recommended Tarot decks for a true survey of time periods

A 15th-century deck that is a 20th-century restoration of the truly old-style tarot. Every reader needs to be familiar with an old deck, and this is in my opinion the best of them. The restoration project was supervised by Alejandro Jodorowsky, the magus and surrealist film director. It is not easily found, but it can be ordered online. When in doubt, contact the Astrology Shop in Covent Garden, London. Ask for Barry and tell him I said hi. There are other decks from this genre but I have not done a thorough review — however, for a quality, bargain version get the Tarot Classic and you’ll get the idea.

A 20th-century deck devised by Aleister Crowley and painted in tempera color paints on wood boards by Lady Frieda Harris. It was painted in the 1940s and finally published in the late 1960s. The originals still exist. I have never seen them but I once saw the building they are supposedly in, somewhere in London.

This deck, viewed as some kind of radical departure from something, is really close to the Marseille tradition. The minor arcana does not have people in it. It has depictions of the suits and numbers which are enhanced by visual representations of energy flow and quality. It also has direct astrological references rather than ones encrypted in the illustrations.

The deck is somewhat difficult to use for reading in my opinion as the cards are a bit astral and sticky. But you will learn a lot from studying them. The Book of Thoth is, in my view, the very best tarot book, followed by Tarot: Mirror of Your Relationships, which is also about this deck.

This is an early 20th-century deck, based on an earlier deck, drawn by the magnificent Pamela Coleman Smith and supervised by Edmund Arthur Waite. This is one of the best decks for regular use. It is a departure from the Marseille deck in that there are people shown in the minor arcana. No overt astrology references. They are stitched and woven into the major arcana. This is a high-vibration, easy-to-read deck. It seems simplistic but it’s a work of genius, reflective of its most gorgeous artist, Pamela. The deck exists in many many versions — I recommend either the original Rider Waite or a modern repainting, the Universal Waite.

This is a truly modern deck, designed by James Wanless. It’s made of collages from cut up magazine advertisements. The deck is 100% made of sliced up ads, and is a work of art. It departs from the normal suits and the usual court cards; you get the Man of Worlds instead of the King of Pentacles, for example. This is the deck I’ve used for approximately 72 readings in the birthday reading series.

This is a modern traditional deck, using the usual suits and references, but beautifully painted with new scenes. It is not a novelty deck like so many other contemporary decks. It was supervised by tarot master Rachel Pollack and painted by Hermann Haindl.

If you want to spend a lot of money for a gorgeous deck, get the Dali tarot. His interpretations are ingenious and a tad demented and surreal. The deck is soaked in love — it was a gift for his wife Gala.

One thought on “Tarot Class Resources”