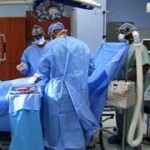 Twenty-two million Americans would lose their health insurance under the Senate Republicans’ healthcare bill over the next decade. That’s according to the Congressional Budget Office, which released its assessment on Monday. Following the report, some Republican senators pledged to vote against even debating their party’s healthcare bill this week.

Senate GOP Healthcare Bill Estimated to Kill 28,600 More in U.S. Each Year & Drop 22M from Insurance
Twenty-two million Americans would lose their health insurance under the Senate Republicans’ healthcare bill over the next decade. That’s according to the Congressional Budget Office, which released its assessment on Monday. Following the report, Republican Senators Susan Collins of Maine and Rand Paul of Kentucky joined Senator Dean Heller of Nevada in pledging to vote against even debating their party’s healthcare bill this week. Republican leaders had been pushing for a vote as early as today, ahead of the July 4 recess. On Monday, the American Medical Association came out against the Senate bill, writing in a letter to Senate leaders, “Medicine has long operated under the precept of Primum non nocere, or ‘first, do no harm.’ The draft legislation violates that standard on many levels.”

Supreme Court Allows Part of Trump Travel Ban to Take Effect Before Ruling on Constitutionality
The U.S. Supreme Court has announced it will allow for the partial implementation of Donald Trump’s temporary ban on travelers from six Muslim-majority countries while the court examines the constitutionality of the order. Trump’s executive order called for a 90-day ban on travelers from Libya, Iran, Somalia, Sudan, Syria and Yemen and a 120-day ban on all refugees. The court is expected to hear oral arguments in the case in October. Three justices—Clarence Thomas, Samuel Alito and Neil Gorsuch—issued a separate ruling supporting the full implementation of the travel ban.

In Major Church-State Decision, Supreme Court Sides with Religious Institution
On Monday, the Supreme Court ruled that taxpayer-funded grants for playgrounds could not be denied to a church-run school in Missouri. In an oral dissent issued from the bench, Justice Sonia Sotomayor said, “This case is about nothing less than the relationship between religious institutions and the civil government—that is, between church and state. The Court today profoundly changes that relationship by holding, for the first time, that the Constitution requires the government to provide public funds directly to a church.”

Court: Bush Administration Officials Can’t Be Held Liable for Post-9/11 Mass Roundup of Muslims
On June 19, the Supreme Court reversed a federal appeals court ruling that former high-level Bush administration officials may be sued for their roles in the post-9/11 profiling and abuse of Muslim, Arab and South Asian men.