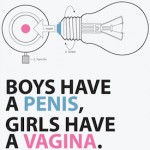 Former school nurse (and current Planet Waves intern) Kathi Linehan offers a peek into the experience of teaching sex ed to 5th grade girls. The country is full of people who were not lucky enough to get comprehensive, empowering sexual education in school — and it shows in the rampant fear American adults have around using basic anatomical terms.

“She’s here!” announced one of the boys. I smiled and put my fingers to my lips indicating he should shush, because Mr. P was teaching in the front of the room. All the 5th graders began fidgeting at their desks, some casting furtive glances at me, some smiling, but all of them noticeably activated. 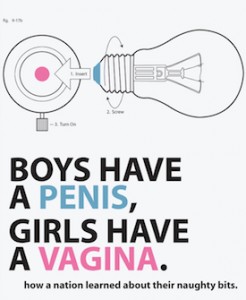 Graphic supposedly created for a 2004 special presentation by PBS and Oregon Public Broadcasting about the history of sex ed in public schools. Sadly, according to an OPB spokesperson reached by phone, no such program ever aired.

Like a rite of spring, it was time for the separate girls’ Reproductive Health class with Nurse Kathi.

Do you remember yours? Was it a nurse talking with you, maybe a gym teacher, or ‘the movie’ like it was for me in the ‘60s? Did you, or could you, say vagina or penis in class? Back then it was called Sex Ed, but we are more politically correct with our title now — if a child lives in a state that even allows a factual presentation about the changes of puberty.

I was lucky enough to be working in New Mexico, one of the 22 states in the U.S. that mandate sex education, at a K-8 school of primarily middle-class kids. As their school nurse, I was deemed by the Public Education Department as best suited to teach 4th through 8th graders about their body changes. I was especially grateful that this was NOT one of the three states that mandate only negative information about same-sex relationships. I could only imagine the feelings of anxiety, shame or isolation such a presentation could cause for any gay or lesbian students, or those with gay or lesbian parents.

Knowing that he had lost the students in this 5th grade class (one of three), the teacher instructed the boys to go to Mrs. K’s room across the hall and the girls to stay with me. One of the boys said jeeringly to a girl, “Have fun!” as he walked by me to exit; I couldn’t resist cheerily saying to him, “See you boys at 2:00.”

The smile fell off his face, as if he had forgotten that his boys-only class followed the girls’. Had he enjoyed embarrassing her about the thought of learning about her body, and then realized he was embarrassed as well?

I cherished my hour with this age group of girls. In 4th grade the girls watched a cartoon movie with me and I showed them how to put a sanitary pad on underwear, as some of them would need to know that at age 9, but that was about all they could handle. But by age 10 to 11, hormones can burst forth like daffodils in spring, and they are eager and ready for real information.

They want to understand why that boy is pushing them on the playground, or they feel a ‘zing’ with someone who, until then, had just been a friend. Hormones are powerful and at this age the attractions of puberty can come out ‘sideways’. They aren’t equipped to handle the feelings; they want to be close or touch someone, but are often misdirected in their attempts.

The students had been taught in previous life-skills classes that they were in control of their bodies, and with that personal responsibility they learned that yes means yes, and no means no. It was my role to reinforce the concept, especially now that they were older and could soon be in an increasing number of situations where they may not have a parent or adult readily available to intervene. These girls weren’t dating yet, but a parent might drive a group of them to the movie theater, and knowing some of these girls, I could be assured they would text a group of boys to meet them there.

We talked about what they could do when another person pushed them at recess. They had the ready answer of “Tell an adult,” like the yard-duty staff or their teacher, which was how these conflicts were usually handled in the school setting — focused on finding a resolution with the involved students. But, if they weren’t at school, how they could advocate for themselves by saying, “I don’t like you pushing me (or touching me) that way, and I want you to stop now”?

Being able to let someone else know what is not okay at that age could only grow into a great skill to have as an adult, and hopefully lead to healthy relationships. And what if that assertion was followed by a question such as “Why were you pushing me?” I can imagine a moment of introspection, followed by the honest answer of “Well, because I like you.” I may be a dreamer, but I was planting seeds of hope for a new generation in which transparency about feelings could be the norm.

We were just sitting and talking together, so when I pulled forward my flip chart to talk about their bodies and the changes of puberty, no one seemed overly concerned. But when I turned to the drawing with an internal view of ovaries, fallopian tubes, uterus and vagina to discuss the cycle of menstruation and used the word vagina, screams and laughter filled the room.

Now I got to do my second favorite thing when teaching 5th grade girls’ reproductive health: to normalize the names of body parts related to the reproductive system and sexuality. I talked about growing up in America today and how in our culture the real names of our body parts related to sexuality are uncomfortable even for many adults to say. On top of that, each of them had family, cultural and perhaps religious values that could shape how they think about anything related to sex.

Just as a topic for pondering, I asked the students what it says about us as a society when we consider the number of euphemisms we have for male and female sexual anatomy.

This was recently demonstrated on The Daily Show when Jon Stewart was interviewing Dana Perino. She was talking about a picture of herself and her dog on the cover of a magazine.

This grown woman, a former White House press secretary accustomed to daily verbal parries with the most direct of reporters is also a current talk show host — therefore most likely familiar with the rules surrounding what words can and cannot be said on TV. Yet she was cringing as she tried to describe being questioned about her dog’s leg.

As Perino put it, the dog’s leg was “directly covering, you know what; the junk thing.”

When Stewart went on to clarify what she was referring to, her answer of “well, not that part, the other part,” was filled with as much trepidation. I really think she would have been just as uncomfortable had she not been on TV, and just talking with a friend.

In the classroom I explained that, for me, the reproductive system is no different from the respiratory or cardiac systems of the body, with organs that had names and functions. I reminded the girls that in addition to deciding what they would allow another person to do with them physically, no one could force them to say anything, either. I said that if they wanted to, there was something I’d like to try together that could help them.

I said, “Let’s all say the word vagina together until we can do it without giggling.” They agreed they could try, and we kept saying “vagina” together. At first the laughing was more uproarious than before, but by the 7th or 8th time, there were just giggles, and finally they could say it in a normal tone.

“Woohoo, you did it!” I praised them for trying that exercise. I’d posit that saying vagina without giggling is not only a step toward accepting our bodies, but necessary for learning to love our bodies — and ourselves.

The class continued and at the end I told them that if they had any more questions they could always talk with me in my office, or could talk with a parent or other trusted adult — that we are waiting for them to ask questions, because many times adults just don’t know how to bring up the subject of sexuality. I reminded them that talking with their friends is ok, too, but that their friends may not know any more than they do, and an adult might have better answers.

Of course, I wish I’d had more than only an hour with those girls, but I can find comfort in the knowledge that there are about 50 girls born in the year 2003 or so who can say the word ‘vagina’ without giggling. If only I could spend some time with Dana Perino so we could practice saying the word ‘penis.’

What about you? Have you had to work at saying ‘vagina’ or ‘penis’ without a giggle, without feeling awkward? Have you ever thought about why?

Personally, when I’m aware of a feeling or apprehension that does not seem situationally appropriate, it’s a signal to delve into my past to find the root cause. Generally, there has been a judgment or shaming that I have internalized that requires excavation. Brought to the surface, it can be examined and truth can shine its healing light. Given how taboo it is to speak of sex and genitalia with anything like relaxed candor, and how lacking the sex education is in most states, we might need backhoes to excavate the whole country.

21 thoughts on “Say vagina ‘til you don’t giggle”