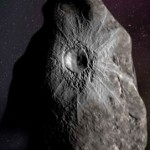 We are close to the halfway mark of the current Mercury retrograde. Overall, this is one of the most interesting retrogrades I’ve ever seen, due mostly to the pattern that Mercury is making with other planets as it backtracks through Gemini.

We are close to the halfway mark of the current Mercury retrograde. Overall, this is one of the most interesting retrogrades I’ve ever seen, due mostly to the pattern that Mercury is making with other planets as it backtracks through Gemini. 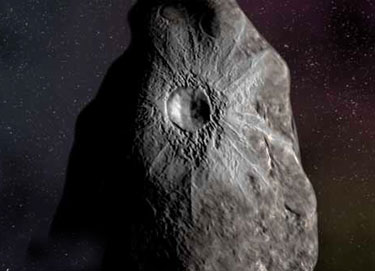 Artist’s concept of centaur Asbolus. Centaurs are similar to asteroids but have much longer orbits, and cross the orbits of other planets. The crater at the center of the image is fairly recent, believed to be less than 10 million years old.

Over the past week, there were many aspects — Mercury conjunct Mars, Mercury square Neptune, Mars square Neptune and others. This describes some significant churning of the emotional and mental waters.

And while it looks like it could be the source of difficulties, I’ve been working with another theory — that this retrograde will contain keys to solving intractable problems. I would say that much of the turbulence will serve as a wakeup call for any situation that’s still dominated by denial.

The midway mark is when Mercury and the Sun form what is called their interior conjunction. Traditionalists call this the inferior conjunction; I have rejected that language. There is nothing inferior about it, but it is interior in that Mercury is between the Earth and the Sun.

This happens at 8+ degrees, in an exact conjunction with a certifiably interesting minor planet — the centaur Asbolus. One of the earliest discovered centaurs, this body has a name that means ‘carbon dust’. I have noticed that when prominent in a chart, it describes those who survive extreme conditions. Carbon dust I take as a metaphor for that which all life has in common, the need to survive.

We’ll see how this manifests in lived reality. I consider this a proving moment for Asbolus — a test of what this planet is really about. We are describing Gemini here, which embodies the concept of dualism. This happens in the form of the mortal twin and the immortal twin, one representing body and one representing soul. This is a controversial concept, though the ancient Greeks may have been describing a perception rather than a reality.

One other interesting aspect is that Venus is about to square Eris. Venus has been making many aspects the past few days — including an opposition to Pluto, a square to Uranus, a trine to Chiron and now, a square to Eris. At the same time Venus will be quincunx a conjunction of Pallas and Pholus in Sagittarius.

This adds some detail to Mercury retrograde — on the emotional level. Venus is direct for the moment, but running a kind of gauntlet. Soon Mercury will be direct and Venus will head into Leo and a conjunction to Jupiter, though that’s the next chapter.