Amanda Painter is away this week, but before she left, she prepped this simple but informative post for the sex-and-relationships column today. You might be surprised just how many facets of ‘reproductive health rights’ you’ve never thought of, amidst the highly polarized abortion debate. 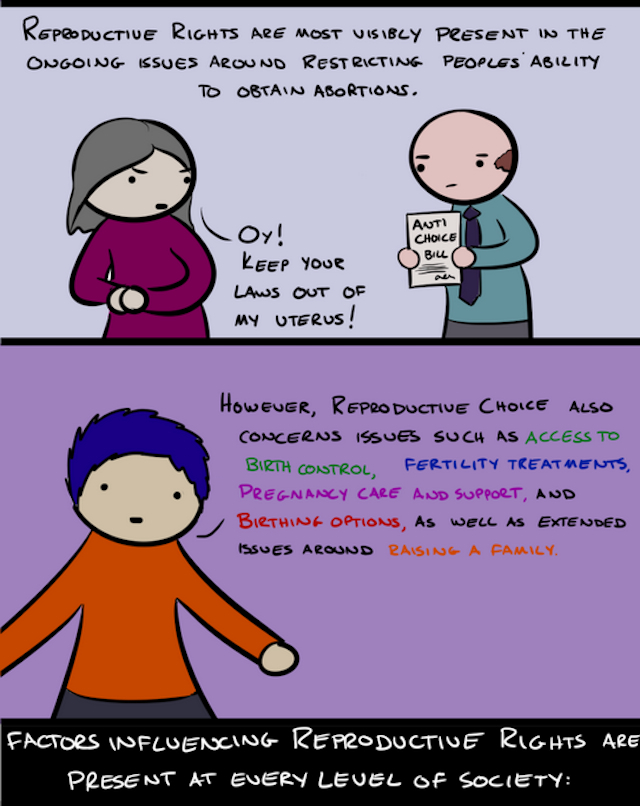 Screen shot of just a small part of the Reproductive Choice comic on Robot-hugs.com, originally published at everydayfeminism.com.

Everyone knows about the pro-life/pro-choice debate; most people know there’s a fight to keep Planned Parenthood funded, against a flood of restrictive state laws and bills in recent years. But did you realize that “reproductive rights” also encompasses such things as limits based on ableism, racism, poverty, education, homophobia, transphobia, slut-shaming and medical assault?

Check out the full comic here, and broaden your view of the rights that deserve protecting (or need to be established in the first place) that go far beyond the usual categories.

Note: since this comic was designed to be part of a feminism campaign, it is obviously focused on women’s reproductive rights, including those of trans women. I’d like to hear from our male readers, too: are there any reproductive rights for you (especially if you are gay or trans) that are as marginalized or threatened? This may include adoption rights, etc.

One thought on “Reproductive Rights: More Than You Thought”