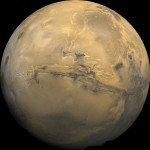 Mars, the ruling planet of Aries, is one of the best-known astrological symbols of individuality. It’s also seen as the planet of aggression. The philosopher Marshall McLuhan made the connection between the two: it is through asserting oneself, and the bump and grind of human interaction, that we find out who we are. 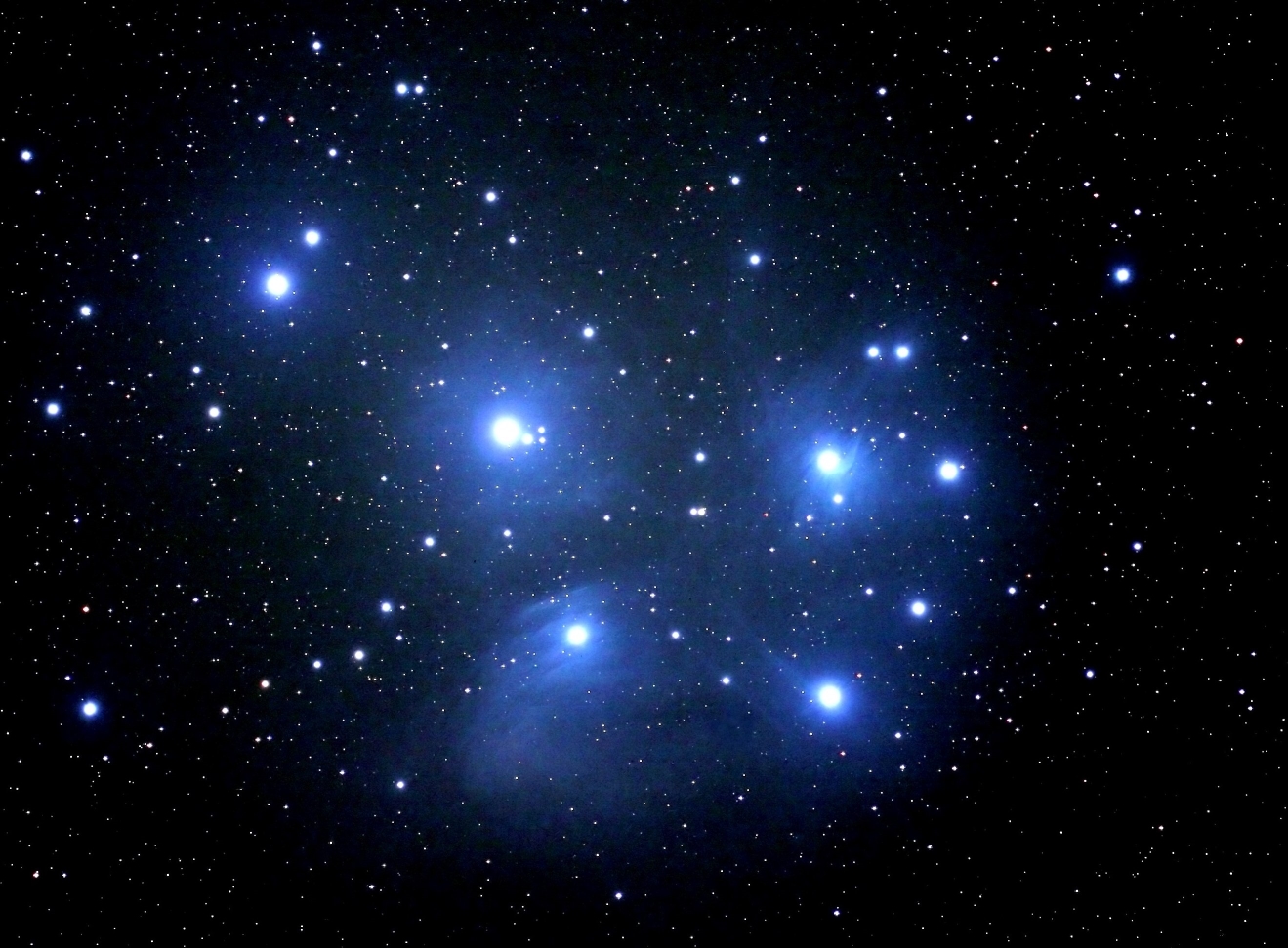 The Pleaides cluster, also known as the Seven Sisters.

Tuesday morning, the Sun ingresses Gemini, with Mercury close behind. The Mercury-Sun conjunction forms a fraction of a degree into Gemini at 9:06 am EDT. There is an elegance in Mercury aligning with the Sun in the first degree of Mercury’s own sign, and this gleams out of the chart.

Be aware that until then, the Sun is void of course, making its way through the last degree of Taurus. The Sun and Mercury will form a conjunction to Alcyone, the primary star of the Pleiades, which has different connotations in traditional and New Age astrology. 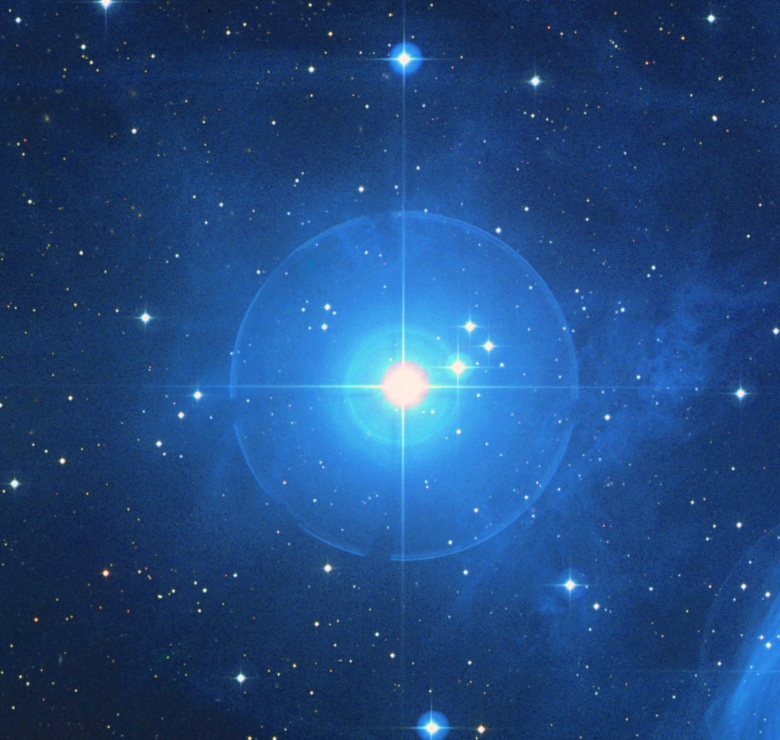 Alcyone a bit closer up, surrounded by other stars in the Pleiades. Image by Roberto Mura, NASA, ESA, AURA/Caltech and Palomar Observatory.

Today, most people take the Pleiades (the Seven Sisters, though really a cluster of hundreds of stars, somewhat local to our Sun) as a gateway to higher consciousness.

Alice Bailey writes in Esoteric Astrology, “The energies coming from Alcyone impregnated the substance of the universe with the quality of mind. As a consequence of this most ancient activity, the same force was present at the time of individualization in this solar system.”

She continues, “For it is in this system, and primarily upon our planet, the Earth, that the major results of that early activity have made themselves felt.”

What I read here is that she’s saying Alcyone impregnated the physical stuff we are made of with consciousness, and that this is associated with the property of individualization — and that is one of our primary tasks on Earth: to evolve into individuals. In that process, Bailey suggests that Alcyone is our guiding star.

Mars Moving Through the Grand Cross

While this is happening, Mars is moving through the grand cross, described in the most recent Thursday edition, and last week’s Monday Morning edition.

Mars, the ruling planet of Aries, is one of the best-known astrological symbols of individuality. It’s also seen as the planet of aggression. The philosopher Marshall McLuhan made the connection between the two: it is through asserting oneself, and the bump and grind of human interaction, that we find out who we are. The experience of conflict is essential to self-discovery. He says this works on the individual level, all the way out to the way that nations handle their affairs.

When people don’t know who they are, they tend to become aggressive, which serves as a means of self-discovery.

Mars is the planet of both aggression and desire. I have a modification on this theory: healthy sexual desire can take the place of aggression. When people are sexually curious, that is another way of saying they want to feel and understand who they are, through the process of relating and interacting with others. 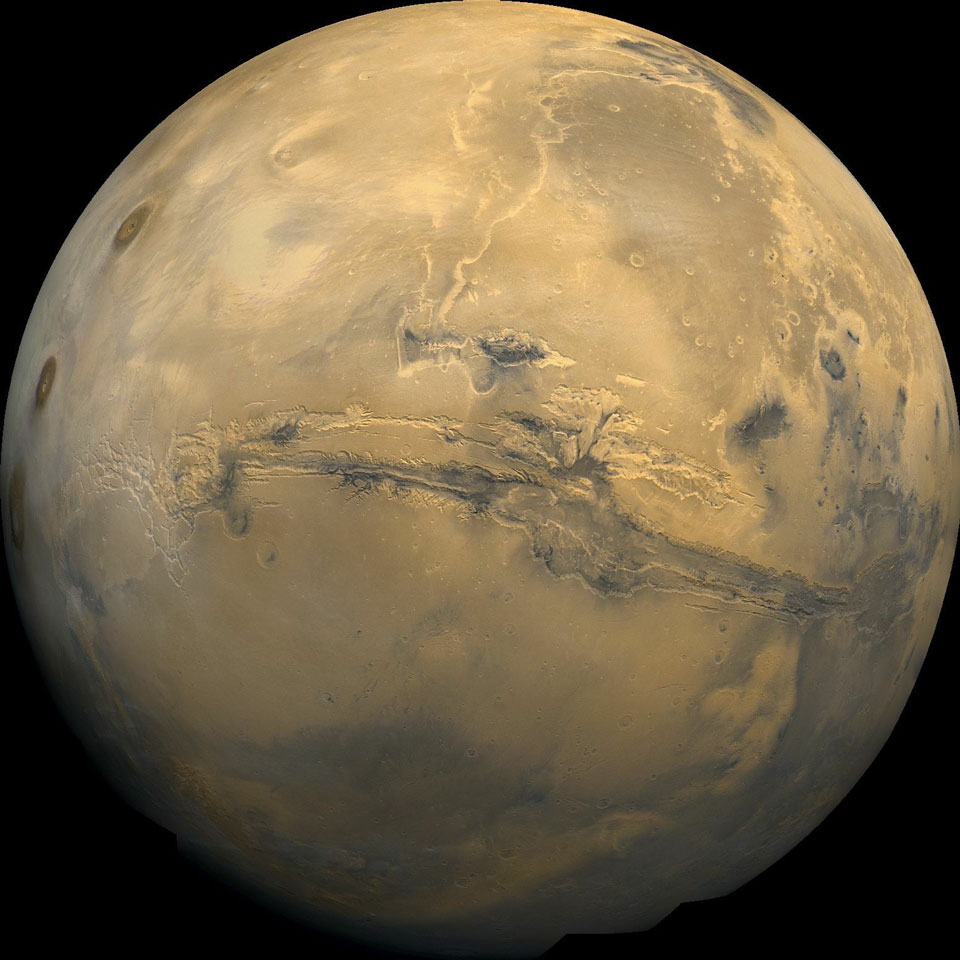 The Vulva on Mars — the Valles Marineris. This image was created from over 100 images of Mars taken by Viking Orbiters in the 1970s. Image by the Viking Project, USGS and NASA.

At the moment, Mars is doing lots of interrelating. It recently formed an opposition to the Pholus-Quaoar conjunction in Capricorn. This is a tap into ancestral reality that will inform the rest of the transit, if anyone is listening. What we think of tradition — in all of its many forms — has deep roots that we can trace back through our grandparents and to the origins of humanity.

We’re now in the second phase of the transit: Mars square Chiron and Salacia in Aries (the sexual healing aspect) and outer planet Logos in Libra: how one frames one’s reality, particularly where relationships (Libra) are concerned. Logos represents the process, logical or otherwise, by which concepts are formed.

With Mars so active in the sky right now, I suggest we be aware that society has Mars issues at the moment. Mars is the planet of masculinity. When we remember that Mars represents both desire and aggression, we are a short hop from the concept of “toxic masculinity.”

The thing is, Mars is not just about men. Everyone has Mars in their charts; everyone has whatever Mars represents. But what typically happens is that women project their Mars onto men, and men project their Venus onto women. Projection is a way of disowning something inside you, and seeing it outside itself.

And per Jungian psychoanalytic theory, what is usually projected is shadow: fear, guilt, shame, rage and related emotions.

Mars making squares is saying that the projection can be called back and the qualities of Mars taken personally as your property, not that of someone else.