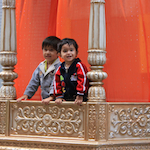 It’s one thing to talk about “spirituality,” another thing to live it. Amanda Painter notes that right now, a grand fire trine is suggesting it’s a perfect time to bring your inner awareness and vision into some tangible, external expression. That is, harness the energy you feel moving within you by actually doing something with it. You have to claim it through action to ‘own’ it, but it is there waiting for you.

We’ve all met that one person who’s always talking about all the cool, adventurous things they’re going to do “someday,” but who never takes even the smallest step toward writing the blockbuster screenplay, or saving up for the trip to Antarctica, or what have you. The same is true for ‘spirituality’ — it’s one thing to talk about it, another thing to live it. 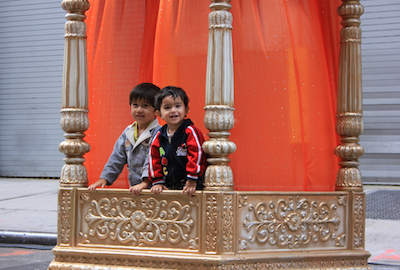 Children: the original perpetual motion machines. These two were playing during an Indian tourism festival near Times Square in Manhattan last September. Photo by Amanda Painter.

Right now, the astrology is suggesting it’s a perfect time to bring your inner awareness and vision into some tangible, external expression. That is, to harness the energy you feel moving within you by actually doing something with it. You have to claim it through action to ‘own’ it.

The astrological pattern conveying this message is called a grand fire trine. On a chart, it looks like an equilateral triangle, where each of the points aligns with planets in signs of the same element.

In this case, that element is fire, and the action is happening late in the three signs involved. We have: Uranus and Eris in Aries; Venus and Jupiter in Leo; and Pholus and the Galactic Center (not a planet, but a very important point — the center of our galaxy) in Sagittarius. The Aries Moon is also part of the pattern until Thursday afternoon, when it ingresses Taurus at 3:49 EDT / 19:49 UTC.

Fire signs imply a lot of active energy, and trines represent harmony and flow. But the thing about a grand trine is that it’s a closed circuit: the energy is flowing continuously through the three points, but without an outlet — unless you give it one.

It’s kind of like the law of inertia in physics: a body at rest tends to stay at rest, and a body in motion tends to stay in motion along its path — unless acted upon by some external force that redirects it.

Astrologer Isabel Hickey had this to say about a grand fire trine: “If you have a grand trine in fire signs (and do not bring your spiritual powers down to the outer level) it is similar to having millions of dollars in a closet on a high shelf.”

You can be complaining that you never have enough money, yet the treasure is there; you just have to claim it.

So let’s bring that image of treasure stuffed away in a closet to your experience of spiritual energy: it’s something that exists within you at all times, but in potential. It’s up to you to do something with that potential.

Does that sound daunting to you? Then bring your ideas down to manageable baby steps. The planets in the grand fire trine are emphasizing in a few ways that a little can go a long way right now; that a modest (but perhaps inventive or unexpected) step could develop legs that take it a good deal further. Expansion is available, especially if the step you take is in line with the values closest to your heart and soul. You may even experience this as integrating facets of yourself.

Maybe it’s time for you to really step up and take initiative to make that healing workshop you’ve been talking about happen. Or if you’ve long been called toward volunteer work or other humanitarian service, email or call to see what you can help with this weekend. It could be as simple as actually setting aside the time to meditate when you never think you have time; or picking up the phone to book an appointment with that counselor/shaman/healer-type person whose writing resonates deeply with you.

These are just a few examples, so please do not feel limited by them. Anything tugging at the edges of your consciousness that ‘clicks’ with the idea of ‘purpose’ or ‘spirit in action’ is ripe for exploration. At the same time, it’s 100% possible to get lost in the sauce of navel-gazing — the spiritual body at rest staying at rest — if you don’t engage your inner life with outward actions.

Remember, with the grand fire trine, you’re not trying to spin gold out of straw. You have the gold already — you just need to get the stepstool, open the closet, take it down and do something with it. Just a little something, set in motion.

5 thoughts on “Putting (or Keeping) the Spiritual Body in Motion”