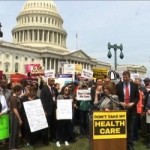 Republicans have moved one step closer to repealing Obamacare after the House narrowly approved legislation Thursday that would result in tens of millions of people losing health insurance while providing a massive tax break to the rich. The future of the bill remains in doubt as Republican senators have vowed to write their own healthcare bill.

Protests Erupt After House Republicans Pass Healthcare Bill That Could Hike Premiums for Millions
Republicans have moved one step closer to repealing Obamacare after the House narrowly approved legislation Thursday that would result in tens of millions of people losing health insurance while providing a massive tax break to the rich. The future of the bill remains in doubt as Republican senators have vowed to write their own healthcare bill. Most major medical organizations and the AARP warned the bill will cause serious harm to patients and drive up the cost of healthcare. The Congressional Budget Office was not given enough time to “score” the legislation—meaning the House voted on the bill without knowing its projected impact. The bill was also opposed by almost every sector in the healthcare industry, including hospitals, doctors, health insurers and consumer groups. It puts a cap on federal spending per person—including seniors and children—under Medicaid and blocks Medicaid funds going to reimburse Planned Parenthood for providing preventive care to women.

French Voters Face Presidential Election Between Xenophobic Candidate & Centrist Investment Banker
Voters in France head to the polls Sunday for a presidential election that pits former investment banker Emmanuel Macron against far-right politician Marine Le Pen. On Thursday, Macron won the support of former U.S. President Barack Obama, who urged French voters to reject the politics of fear. Le Pen has campaigned on an openly xenophobic and racist platform, and faced protests Thursday as she campaigned at a trucking company in Brittany. “They have to choose between an openly racist candidate like Marine Le Pen, who promises the supremacy of whites and Christians, regardless of our constitution, of our tradition of separation between church and the state, and, on the other hand, you have Emmanuel Macron, who appears to be this young guy who sends a signal of, yes, it’s going to be about empowering people through entrepreneurship,” says Yasser Louati, a French human rights and civil liberties activist and researcher. “The problem is that his version of society is that you run a country like you run a company. And the problem is that nothing in his program actually goes alongside the working class.”

NAACP Calls on Louisiana to Charge Police Officers Who Shot & Killed Alton Sterling in Viral Video
The NAACP is calling for Louisiana to conduct a thorough investigation and vigorously pursue charges against the police officers who shot Alton Sterling, an African-American father of five who was gunned down by police in 2016. This comes after the Trump Justice Department declined to bring federal charges against officers Blane Salamoni and Howie Lake. “What’s so frightening here is that these investigations, state and federal, are being conducted in an atmosphere of dangerous silence and dangerous presumption,” says Cornell William Brooks, president and CEO of the NAACP. “This code of blue prevents people from coming forward. It inhibits a free and frank discussion and testimony with respect to what’s happened in so many instances.”

NAACP Renews Demands for Police Reform After Police Shooting of Black Teen Jordan Edwards in Dallas
NAACP President and CEO Cornell Brooks responds to the case of 15-year-old Jordan Edwards, who was killed Saturday in the Dallas suburb of Balch Springs by police officer Roy Oliver, who shot him in the head while he was in a car leaving a party. Oliver was fired on Tuesday. “This is a moment in our democracy where we have got to not only call for reform, but demand reform,” Brooks says. “That means not only lawyers in the courts pursuing charges, pursuing prosecution of bad police officers, but also means activists in the streets engaging in serious civil disobedience, serious disruption of business as usual, and literally bringing this system of police misconduct and brutality to a grinding halt.”