Fascinated by the ways in which underworld mythologies have re-entered the collective consciousness thanks to images of Pluto, Amanda Moreno considers the importance of imagination and personal mythology as well as our culture’s tendency to avoid thinking about death.

What a week — a potent New Moon and new images of Pluto, the lord of the underworld — or at least one of his masculine celestial representatives. While writing my column for last week, I had no idea Pluto and its surrounding themes, particularly the nuclear ones, would be making an appearance on the world stage. Now that I’m paying attention again, I’m delighted to see the underworld getting some airtime. 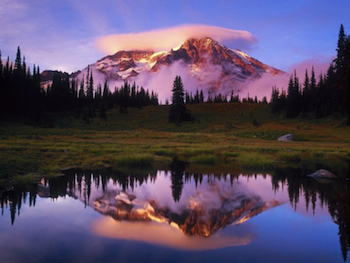 I shouldn’t be surprised, really, that something related to nuclear power made headlines this week. The detonation of the first nuclear bomb does, of course, coincide with the ‘discovery’ of Pluto, reflecting its themes of complete destruction, chaos and volcanic eruptions from down below — be that below place the underbelly of the Earth or the unconscious.

Of course we also have an invigorated thread about underworld themes. Although I’ve enjoyed looking at the various images of Pluto, nothing has sparked excitement within me quite as much as this article, which discusses the naming of many of Pluto’s newly discovered features for creatures related to underworld mythologies. I see in that the potential for some old mythologies to re-enter the collective consciousness.

My spirituality has evolved to embrace the mythological as vital to our culture’s ability to navigate a global rite of passage. Realizing that all of those underworld mythologies are being re-animated within collective consciousness during this time is exciting to me not just because it’s all so intellectually fascinating and gives us the opportunity to actually talk and think about death, but because those images and stories get the imagination pumping.

Juicy imaginations are the key to developing a new, sustainable, global mythology or mythologies. More than that, a hearty imagination is a key ingredient in scientific breakthrough, and something we need more of if we’re going to create sustainable options for things like clean energy.

According to Joseph Campbell, “myth is the secret opening through which the inexhaustible energies of the cosmos pour into human cultural manifestation.” Underworld mythologies are particularly important because they place us in contact with the life/death/life cycle and therefore in contact with the organization of the universe.

Western culture has such a deep and profound fear of death. We constantly attempt to banish the reality of death, stripping our social, psychological and cosmological views of any recognition of this completely unavoidable facet of life. Instead of using mythology or even natural cycles to illustrate the regenerative and creative aspects of death, we act as if the death of a body is a definitive and concrete ending. It is my belief that this avoidance inhibits our ability to have healthy, transformative relationships at the soul level with other beings, with our food and surroundings, and with ourselves.

A teacher of mine often says that the human psyche is constantly throwing up seeds for a new global myth, marking the signs of spiritual revolution, and these are most often and obviously found in dreams. Dreams are the way that the psyche speaks to us, and in times of paradigm shift dream images can help us to understand how our personal unconscious speaks, elucidating our ever-shifting personal mythologies within the context of the collective.

It often seems like as we become capable of understanding our personal mythologies, whether by acknowledging past stories we’ve told ourselves, or recognizing frameworks we’re moving into, we have to encounter and experience them. We then add those stories to the deepening collective myth of the times we live in — even if we live in a culture that seems to think ‘myth’ is a synonym for ‘lie’. The beauty and the burden here lies in that as we shape these interwoven stories, we have the power to transform them.

I wonder sometimes whether we should be reworking old myths or going off on an entirely new path. It seems that in many ways, the obvious answer is that we are doing the latter, creating something completely different. Carl Jung believed that we would ultimately re-work and revitalize the Christian myth. In that sense, the nuclear myth, which seems to be the prevailing myth of our time, encompasses the Beast-Messiah complex quite nicely.

I don’t know, though. I wonder how our general cultural ambivalence towards mythology, and unconscious creation of overarching stories, increases our feelings of being acted upon by outside forces, and of being victims. I like to think we can move away from waiting for something from the outside to save us, or blaming something out there for our hurts and pains.

Perhaps all of this Pluto stuff will just fall away, with only a little ripple of collective awareness of underworld mythologies. It’s quite the dynamic, isn’t it? With the closing of the Uranus-Pluto square, I’m intrigued at the possibility of a cultural deepening. Not that I’m suggesting pictures from outer space will definitely trigger that. But I am aware that those Uranian lightning bolts and the mental trauma and liberation associated with them tend to register more quickly than the cavernous tumult of emotional Plutonian transformation. So we shall see, I suppose.