The Republican National Committee is upset at how CNBC recently asked “silly” questions of its “serious” field of 15 (15!) presidential candidates, and is mandating that the TV networks play a softer form of ballgame. Fe Bongolan dissects how the party of Atwater and Rove is getting hit with its own ball.

Here’s your entertainment in the theater of irony. CNBC, the network responsible for the birth of the Tea Party Movement, is called on the carpet for asking what amounted to “silly” and frustration-producing questions of the “serious” Republican field of 15 candidates at the third Republican debate in Colorado.

After last Wednesday night’s CNBC debate, Reince Priebus, the Republican National Committee chair put his foot down. He cancelled NBC’s Republican debate for February — right at the beginning of the primaries — due to the “bad faith approach” of the CNBC debate format. In his letter to Andrew Lack, Chairman of NBC News, Priebus charged:

When CNBC’s panel asked the candidates to expound on the Trump candidacy as a “comic book version of a presidential campaign” — which, by the way, was absolutely on the freaking money — the RNC’s criticism of this and similar questions asked at last week’s debate had to be taken seriously.

The Republican National Committee was so upset by CNBC’s handling of the Colorado debate that it cancelled its deal with CNBC’s parent company, NBC, to broadcast the RNC’s debate of February 2016 — at a time when the Presidential primaries begin in earnest. That rung NBC’s bell. Loudly. They have a bottom line to protect. They need to make money by broadcasting political debates and running political ads.

By Sunday night — after meetings, tweets, threats, demands and push-back between representatives of the networks and the Republican campaigns — Ben Ginsberg, attorney for the Republicans, drafted this letter template to go to the TV networks. It incorporates the expectations, understanding of limitations, appeals for “fairness” and serious coverage of the debates:

This letter is on behalf of the 15 Republican Presidential campaigns. We are aware that you are sponsoring a debate on _____ at ______. Below and attached are questions about your debate to which the campaigns would appreciate answers at your earliest convenience, and in any event no later than a month from today.

The answers you provide to these questions are part of a process that each campaign will use to determine whether its candidate will participate in your debate. All the candidates recognize that robust debates are an important part of the primary elections. It is also important that all debates be appropriate platforms for discussing substantive issues and the candidates’ visions for the future.

To achieve this going forward, the campaigns ask that you:

— Answer the questions below within 30 days of receipt by communicating directly with the campaigns. We’ll provide an email list for that distribution.

— The campaigns will use the manner in which your debate(s) are run (and changes you say you will make from your past debates), the quality and fairness of your moderators’ questions, their enforcement of the rules and their ability to achieve parity in distribution and quality of questions and time among the candidates to evaluate whether the candidates wish to participate in your future debates.

— In addition, based on their evaluation of previous debates, the campaigns wish to have in all future debates a minimum 30-second opening statement and a minimum 30-second closing statement for each participant; candidate pre-approval of any graphics and bios you plan to include in your broadcast about each candidate, and that there be no “lightning rounds” because of their frivolousness or “gotcha” nature, or in some cases both.

The campaigns appreciate your participation to achieve what they feel is a great need for more accountability and transparency in their primary debate process. In addition to addressing the above points, please answer the following:

Where and when will the debate be held? What are criteria for inclusion? If you choose to base this on polls, please detail which polls and why each poll’s methodology and sample size is acceptable to you. Who is the moderator? Will there be any additional questioners? Are they seated?

What is the estimated audience for the debate? Will it be disseminated on-line? By radio? Will it be disseminated by other means and do you have any additional partners? What format do you envision – podiums, table, other? Will there be questions from the audience or social media? How many? How will they be presented to the candidates? Will you acknowledge that you, as the sponsor, take responsibility for all questions asked, even if not asked by your personnel?

What is your proposed length of the debate? Will there be opening and closing statements? How long will they be? Will you commit to provide equal time/an equal number of questions of equal quality (substance as opposed to “gotcha” or frivolous) to each candidate? How long are the answers and rebuttals? If a candidate is mentioned, will he/she automatically be called on so they can rebut? Will there be a gong/buzzer/bell when time is up? How will the moderator enforce the time limits?

Will you commit that you will not: Ask the candidates to raise their hands to answer a question; ask yes/no questions without time to provide a substantive answer; Have a “lightning round”; Allow candidate-to-candidate questioning; Allow props or pledges by the candidates; Have reaction shots of members of the audience or moderators during debates; Show an empty podium after a break (describe how far away the bathrooms are); Use behind shots of the candidates showing their notes; Leave microphones on during breaks; Allow members of the audience to wear political messages (shirts, buttons, signs, etc.). Who enforces?

What is the size of the audience? Who is receiving tickets in addition to the candidates? Who’s in charge of distributing those tickets and filling the seats? What instructions will you provide to the audience about cheering during the debate? What are the plans for the lead-in to the debate (Pre-shot video? Announcer to moderator? Director to Moderator?) and how long is it? Are you running promo ads before the debate about your moderator(s)? What type of microphones (lavs or podium)? Can you pledge that the temperature in the hall be kept below 67 degrees?

If there is any additional information you would like to provide the candidates and the campaigns, please do so. Thank you for your cooperation. Should you have any questions, the campaigns will be pleased to answer them.

On the surface, the concerns of the RNC appear reasonable; but the kind of politics the candidates discuss and the virulence their platforms and talking points generate — either at debate or on the stump — go beyond reasonableness. Some of the Republican candidates are completely nuts. 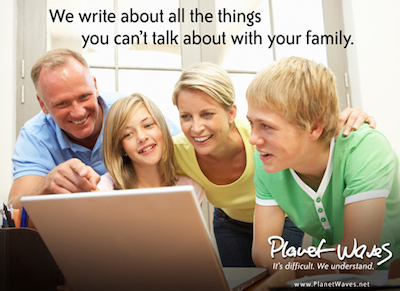 Are you the political black sheep in your family? Welcome to the most sane forum for discussing politics on the Internet. You can now get access to articles posted on this website through Planet Waves’ new reader-level membership. Tell your friends, no matter what their party.

The level of information prep and production control requested in the letter indicates to me they don’t want the candidates to be shown as they are. They don’t want the hard questions thrown at them. Poor things.

It’s funny. We’re dealing with the party of Lee Atwater and Karl Rove, fathers of the killer “gotcha” moments complicit with the media for use in character assassination. And they are masters in Goebbels’ practice of repeating lies until they become truth. And yet now they’re whining for fairness from a news media grown used to info-sop and surrogate attack interviews, where people shout over each other instead of thoughtfully answering questions.

They’re chastising CNBC — the very network responsible for the birth of the Tea Party. I am sure the Republicans are hoping no one notices that it’s their own rules of engagement they want changed — for them. But they made their bed a while back. Time to lie in it.

This is what election politics has become: entertaining disinformation. And looking at this colorful Republican cast of 15 characters saying anything they can to make headway in such a crowded field provides some very interesting entertainment indeed. Karma can sometimes be a cruel mistress, particularly if you’ve been on the dishing end of it, and even more when you’re feigning victim-hood from media unfairness and trying to get away with it.

They’re asking the media to play softball for them. When you trade down from the hardball of the big leagues to softball, you need to remember that a softball is bigger and far more visibly obvious to those even casually watching. People get when they’re being played down to.

In their defense, CNBC vice president of communications Brian Steel said, “People who want to be president of the United States should be able to answer tough questions.”

Let’s see if the Republicans don’t trip over the bar they’re asking networks to lower.