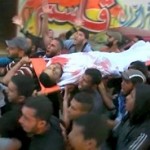 The Israeli military killed at least 61 Palestinians in Gaza and wounded 2,700 more for protesting Monday’s opening of the U.S. Embassy in Jerusalem and the Israeli occupation. It was the deadliest day for Palestinian protesters since they launched the nonviolent Great March of Return.

Palestinians Mark 70th Anniversary of Nakba After Israel Kills 61 & Wounds 2,700 Protesters in Gaza
The Israeli military killed at least 61 Palestinians in Gaza and wounded 2,700 more for protesting Monday’s opening of the U.S. Embassy in Jerusalem and the Israeli occupation. It was the deadliest day for Palestinian protesters since they launched the nonviolent Great March of Return on March 30. Palestinian leaders are accusing the Israeli military of carrying out war crimes during Monday’s crackdown. More protests and a general strike across the Palestinian territories are planned for today.

Gazan Writer: Protesters Are Seeking Freedom from World’s Largest Concentration Camp
Funerals are being held across Gaza today for the 61 Palestinians killed by the Israeli military, which opened fire into crowds of unarmed demonstrators protesting the opening of the U.S. Embassy in Jerusalem and the ongoing Israeli occupation. Among the victims shot dead by an Israeli sniper was 30-year-old Fadi Abu Salmi, who used a wheelchair and had both his legs amputated. Another victim was 8-month-old Laila al-Ghandour, who died early this morning after inhaling tear gas fired by the Israeli military, including tear gas dropped by Israeli drones. Muhammad Shehada is a writer and activist from Gaza and a student of development studies at Lund University, Sweden. He writes for Haaretz, The Forward and other publications. His latest article for The Forward is titled “All We in Gaza Want Is That Israel Recognize Our Humanity.”

For Palestinians, New U.S. Embassy Is a Symbol for Gaza Protests—But Mass Oppression Is Root Cause
While the Israeli military was carrying out a massacre against Palestinian protesters in Gaza, senior members of the Trump administration gathered in Jerusalem for the opening of the U.S. Embassy. Among those who attended were President Trump’s daughter, White House senior adviser Ivanka Trump; her husband, senior adviser Jared Kushner; and Treasury Secretary Steve Mnuchin. The Trump administration’s decision to move the U.S. Embassy to Jerusalem has sparked widespread condemnation, including in the city of Jerusalem itself, where demonstrators gathered Monday to protest the ceremony.

“The Disaster of My Life”: Nakba Survivor on the Day Israelis Bombed & Invaded His Village in 1948
Palestinians are staging a new round of protests in Gaza today to mark the 70th anniversary of the Nakba, or the Day of Catastrophe, when more than 700,000 Palestinians were forced to flee or were expelled from their homes. Today’s protests come after the Israeli military killed 61 unarmed Palestinian protesters on Monday. In total, since the Palestinians launched the Great March of Return protests on March 30, the Israeli military has killed at least 109 Palestinians and wounded 12,000 people.

While U.S. Refuses to Blame Israel, Int’l Court Could Launch War Crimes Probe into Gaza Killings
The Israeli military’s massacre of Palestinians Monday has sparked widespread international condemnation. South Africa has recalled its ambassador to Israel. Turkey has recalled both its ambassadors to Israel and the United States and has declared three days of mourning starting on Friday. Palestinian leaders have accused the Israeli military of committing war crimes, but the United States has blocked a U.N. Security Council statement calling for an independent investigation into the killings. Meanwhile, Israeli officials have tried to claim Hamas is behind the protests in efforts to justify the killings.