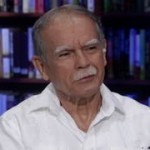 Amy Goodman and Juan Gonzalez interviewed longtime Puerto Rican independence activist Oscar López Rivera, who was imprisoned for about 35 years—much of the time in solitary confinement—before President Obama commuted his sentence in January. On May 17, 2017, less than a month ago, López Rivera was released.

Oscar López Rivera Speaks Out on Newfound Freedom, Becoming Politicized & Decolonizing Puerto Rico
Amy Goodman and Juan Gonzalez interviewed longtime Puerto Rican independence activist Oscar López Rivera, who was imprisoned for about 35 years—much of the time in solitary confinement—before President Obama commuted his sentence in January. On May 17, 2017, less than a month ago, López Rivera was released. During the 1970s and 1980s, he was a leader of the pro-independence group FALN. In 1981, López Rivera was convicted on federal charges including seditious conspiracy—conspiring to oppose U.S. authority over Puerto Rico by force. López Rivera describes his time in prison, his youth in Chicago and how he became politicized. He also comments on Puerto Rico’s current political crisis and says as long as Puerto Rican youth are “struggling and doing something for the economy, doing something for themselves, doing something for Puerto Rico, there is hope.”

Oscar López Rivera on Declining Honorific at National Puerto Rican Day Parade After Controversy
Puerto Rican independence activist Oscar López Rivera, who was imprisoned for about 35 years, gave his first broadcast interview in New York City since he was freed on May 17, 2017. His visit coincides with the city’s long-standing Puerto Rican Day Parade. This year’s organizers chose to honor López Rivera as the parade’s first “National Freedom Hero.” But after a boycott campaign was organized by a right-wing conservative group funded by donors close to both President Trump and to Breitbart News, the city’s police chief and a number of corporate sponsors said they will boycott the event. Oscar López Rivera says he will still march, not as an official honoree but as a humble Puerto Rican and a grandfather.

Marcy Wheeler: James Comey Planned His Dramatic Testimony Release to Undercut GOP Smear Campaign
Former FBI Director James Comey will testify before the Senate Intelligence Committee today on whether President Donald Trump pressured him on more than one occasion to end a probe into former National Security Adviser Michael Flynn. Comey, fired by Trump last month, released his planned opening statement on Wednesday. In his statement, he alleged that in late January he was summoned to the White House for dinner with Trump. At the dinner, Trump declared, “I need loyalty, I expect loyalty.” The hearing comes a day after senior national security officials dodged questions by committee members over whether Trump asked them to intervene in Comey’s investigation.