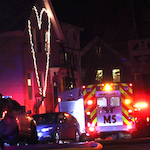 Monday evening Amanda Painter looked out her window to see the street swarming with emergency personnel and vehicles, lights flashing everywhere. In words and pictures, she describes her community’s response, and her own. 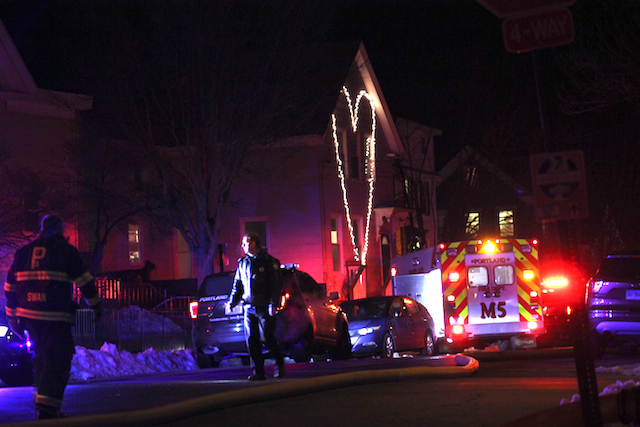 First responders across the street from my house Monday night, Jan. 2. The building on fire was further down the block, on the other side of the street. Photo by Amanda Painter

Monday evening I was doing my little workout in my apartment after work and was almost done. I noticed lights and sirens going by; glanced out a window or two; went back to working out. I live near the fire station, so lights and sirens drive by very regularly. But then I realized that these lights and sirens were not continuing onward — they seemed to be hanging out nearby.

I looked out my bedroom window: not only was the street positively swarming with fire and police vehicles and personnel, but I could see illuminated smoke billowing out of one of the big low-income apartment buildings at the end of my street.

I changed clothes, and put the long lens on my camera. Outside, I asked a couple different policemen if everyone had gotten out okay (they had — mostly recent immigrant families); one of them said the Red Cross was on its way to help out the displaced residents. And then I took some photos.

Walking around the block to the other side of the chaos (I have never seen in person so many emergency vehicles, police and firefighters and hoses running down the street in one place), I noticed two women sitting on a stoop surrounded by several young children. 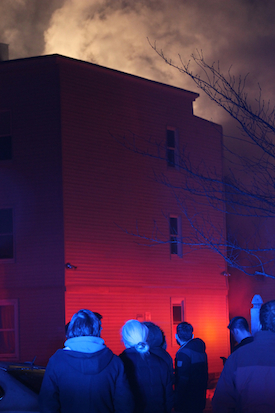 Neighbors watch billowing smoke from behind the building. Photo by Amanda Painter.

One of the women, middle-aged made eye contact with me, so I asked if they were all residents of the burning building.

She replied that she herself was just a neighbor but that the other woman (who was wearing a hijab) and the children — all huddled under blankets — were. She explained that she is a teacher at the nearby school, and one of the little girls was in a classroom next to hers, and had recognized her as a teacher.

I offered to run back home and get an extra comforter that I keep on hand, but she smiled and said she thought they were okay with the ones they had. She added that she had given the girl from her school, who was snuggled against her, her mittens to wear on her feet.

These families had had to rush out of their home without stopping to add layers; further down the street, I could see a man in a red short-sleeved T-shirt. The temperature was somewhere in the 20s Fahrenheit.

As I turned to leave our short conversation, a man carrying a tray full of hot-beverage to-go cups — like the one I had seen one of the children holding — came walking up the sidewalk. There is a lovely little restaurant called The Blue Spoon just behind (and across a small parking lot from) the building that was smoking, and another called Lolita across from The Blue Spoon, on the next street over. I suspect he came from one of the two.

Interesting discovery: in this age of everyone with a camera phone, if you’re out there with a remotely “pro” looking camera, police seem to assume you’re with the media. Fascinating. 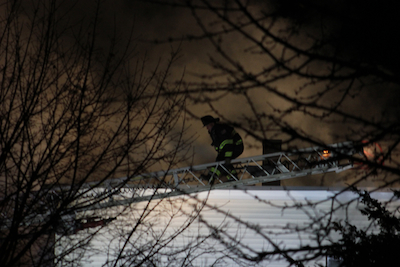 A Portland, Maine, firefighter walks along a ladder above a smoking building Jan. 2, 2017. Photo by Amanda Painter.

The spot-news story from the local paper later Monday night confirmed that nobody was injured in the three-alarm fire; later reports have said 33 people lost their home that night.

A woman from Angola, who immigrated here with her four teenage children, was quoted as being concerned for her kids’ immigration documents and IDs. Thankfully, the Red Cross can help connect people with the appropriate governmental agencies for that, though they cannot actually replace those documents themselves.

I suspect that would be a huge concern after a fire at any time. But now? With the incoming administration? The illuminated heart on the building in the top photo appeared long before Christmas; it coincided with many half-sheets of paper with a big heart and the words, “You are my neighbor and I am happy you are here” — in English, Spanish and Arabic — taped to many doors around town.

It is an almost inconceivably heartbreaking way to start the new year. Especially for people who barely have anything as it is. But I overwhelmingly came away from the experience with a sense of gratitude. I am grateful to live in a community full of caring, welcoming people; and in a place where — no matter where you live, what you look like or how much money you have — emergency personnel will arrive to help you out. It is part of our social contract, our social fabric; and I think it is something of a critical guiding principle as we make our way into this new year.

3 thoughts on “On my street this week”