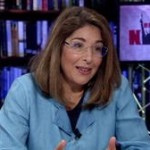 “No Is Not Enough”: Best-Selling Author Naomi Klein on Challenging Trump’s Shock Doctrine Politics
As Donald Trump is sued by the attorneys general of Maryland and Washington, D.C., for “unprecedented constitutional violations” and as another federal appeals court rejects Trump’s Muslim ban, Amy Goodman and Juan Gonzalez interview best-selling writer Naomi Klein, author of the new book, No Is Not Enough: Resisting Trump’s Shock Politics and Winning the World We Need.

Naomi Klein: Trump is the First Fully Commercialized Global Brand to Serve as U.S. President
A decade after Naomi Klein published her now-iconic book “The Shock Doctrine,” the best-selling author and activist reflects on how Donald Trump represents a form of continuous shock and how he ran a branding campaign—more than a political campaign—in order to capture the presidency.

Naomi Klein on Jeremy Corbyn, Bernie Sanders & Youth-Led Grassroots Progressive Insurgencies
Over the weekend, more than 4,000 people gathered for the People’s Summit in Chicago. Among those who spoke was Vermont Senator Bernie Sanders, who called the Democratic Party’s strategy an absolute failure and blamed the party for the election of President Trump. This comes after the Labour Party in Britain won a shocking number of new seats in the British election. Labour leader Jeremy Corbyn is now poised to possibly become the next British prime minister. For more on these insurgent progressive politicians, we speak with best-selling author and journalist Naomi Klein, whose new book is “No Is Not Enough: Resisting Trump’s Shock Politics and Winning the World We Need.”

Naomi Klein: Climate Movement Is Growing Even More Ambitious as U.S. Goes Rogue & Exits Paris Accord
The United States has refused to sign on to a G7 pledge saying the 2015 landmark Paris climate accord is “irreversible.” On Monday, the U.S. said it would not join the six other member nations in signing on to the pledge. This comes after Trump announced he was pulling the U.S. out of the historic accord.

“A Transformative Vision”: Naomi Klein on Platforms for Racial, Health & Climate Justice Under Trump
Since Trump’s inauguration, the United States and the world have been rocked with a series of massive nationwide days of action, including the Women’s March, the People’s Climate March, the March for Science and the March for Truth. Just this weekend, more than 4,000 people joined the People’s Summit in Chicago.