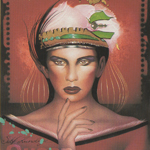 What make you of a Queen, and two Twos? This is the question Sarah asks and explores in this week’s three-card reading. The answer lies at the heart of the Queen herself, and the changes that her presence makes room for in your life.

What make you of a Queen, and two Twos?

There is something to be said, here, of an aspect of the personality that has been made present sometime in the near past, which is bringing about change on a material level. This includes the materiality (mater-iality) of who you are — and how this transitions into change, and a regaining of equilibrium on the mental plane. 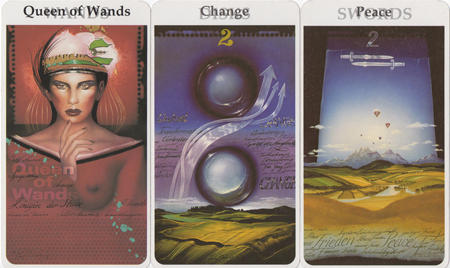 Queen of Wands, Two of Disks, Two of Swords from The Röhrig Tarot deck, created by Carl-W. Röhrig. Click on the image for a larger version.

Where are you in this? Maybe you are still in the throes of the Two of Disks.

That would be more likely: that, right now, you are not sure of where you are, of what is happening, and of where things stand. What you can know is that things will not be the same again. You, and your life, are changing in some tangible way.

The catalyst lies at the left: the emotional, watery nature of fire. She is Leo in her most queenly form. A witch in her most potent form — and when you look at her, you are looking into the mirror. In a key way, you are her, and she is you. I wonder what would happen if you were to look at the card and strike the same pose? Finger resting on your chin, coolly regarding yourself with inner fire, lips closed. But if they were to open, what would you say to yourself?

“Do you know yourself?”

Perhaps you do. Perhaps you don’t. Perhaps you think you know. What feels true when the Queen of Wands appears next to the Two of Disks is that there is a part of you that is becoming known to you, and it has the potential to rock your world. The word “change” doesn’t appear on both the Queen of Wands and the Two of Disks for nothing. No. There is a reason for this change; the fire has come through to shake things up a little — or a lot. Your creativity, your passion, your ecstasy, are calling you out.

This call is not heartless, however, because the Queen of Wands is not without heart. Her gaze may be implacable, but her exposed left breast indicates that her feelings are right there for the world to see. She is utterly unafraid to live her vulnerability along with her fire, her motherliness along with the lioness. Her Mama Lion roars are an activating force — maybe out of direct ear-shot, but they are reverberating nonetheless.

Do you know yourself? What would change if your existence were a lived-out declaration of what beats at the heart of you? Because those flames are licking right through you, baby. Can you feel them? You are them, and they are you. Can you ride the heat without losing your cool? Can you be your inner fire-keeper?

I think you can. And the reason for this is held in the relationship between all three cards, and particularly both Twos.

While red predominates with the Queen, my eye is also drawn to the spatters of green on the lower half of the card — spatters that continue onto her headdress and morph into two green ribbons that hold between them a key. This key is pointing to the Two of Disks, as if it unlocks something that sets the two Disks into motion.

In the Two of Disks, the red of the Queen is still apparent in the mauve sky behind the lower Disk. Her quality is acting behind the scenes, shifting and drawing three near-metallic arrows out of the clouds on the horizon, which then become the agents of change. They direct and hold the Disks — two magnetic, hematite spheres — in a new paradigm of relatedness.

The arrows, like the key, point to the next card as if leading my eye to a third metallic element: two swords lying horizontally, hilt-to-point. The invocation of the fiery feminine was what was needed in order to redress an imbalance and open the skies up to new possibilities.

The Two of Swords — Peace — is another card that speaks of transition: the creation of a through-point that clears the skies enough that you can journey to new land. And it looks like the journey itself could be one beautiful adventure, if you are open to moving in a way that you may not be used to, open to living with a lot more (head) space than you may be used to.

First: change. It’s the change that gets you to the space. With that space, you can choose to leave an element of your life behind that in some way has felt stuck or barren. You don’t need to be there anymore. The through-point beckons. Adventure — your passion, your heart — is calling.

Astrology/Elemental correspondences: Queen of Wands (the watery aspect of fire / Leo), Two of Disks (Jupiter in Capricorn), Two of Swords (Moon in Libra)