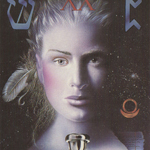 Another week, another layout — and the same combination of major, major, minor. It seems like there is a specific song being played, in the same signature, but a progression is taking place. Sarah Taylor explores the striking correlations between the two readings and why Pluto holds the key to what is taking place.

There are some interesting correlations and mathematics in this week’s reading.

First, like last week, the first two cards belong to the major arcana, with a minor — this time Wands — to the right of them. We are riding on a theme here, and my sense is that this week is a particular evolution of something that is not new, but is starting to shift into new territory. 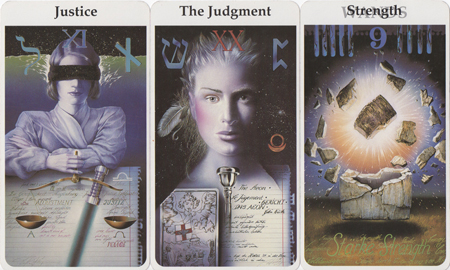 Justice, The Judgment, Nine of Wands from The Röhrig Tarot deck, created by Carl-W. Röhrig. Click on the image for a larger version.

Second, Pluto appears at the centre in the form of The Judgment, just as it moves to centre-stage in the news: the New Horizons space probe is due to fly past the dwarf planet tomorrow, July 14, 2015. One headline sums up the synchronicity: “Pluto to give up its secrets.”

Or, is it that the influence of Pluto is giving up your secrets?

Numerically, the number “two” is underscored in both readings. Here, Justice is card 11, The Judgment is card 20, both cards adding up to 2 (1+1 and 2+0). The High Priestess from last week, as card 2 in the major arcana, is making another visit this week, but in a different guise: the accompanying book to The Röhrig Tarot explains that the figure in The Judgment is The High Priestess — only this time, with her eyes open.

The liminal feminine, inward-looking, in the past (as the High Priestess to the left of last week’s reading), is now present, here right now, and calling others to their own awakening — as she is calling you to yours. You are turning your inner vision outwards. This is further reflected in the contrast between the angel and the blind-folded figure of Justice who sits in the recent past.

Finally, nine (from the Nine of Wands) is the difference between XX (The Judgment) and XI (Justice). This is all leading you somewhere.

It is leading you to the point of breakthrough. Are you able to recognise the call to action and shift that fortified, entrenched way of acting — the one that, quite frankly, has started to bore you, and everyone else, to tears — so that you give yourself enough space to a) see a way through and b) get yourself there?

Hint: get out of your own way. There is nothing else you need to do. There are bigger forces at work than you alone, and they are the driving factors. To push is to add unnecessary fuel to an already kinetic situation. To resist is to look into the eyes of an angel and mistrust what you see. There is no need to fight; the weapons were laid down some time ago. It is time to listen, to hear what is being spoken to you through the trumpet-blast of your own awakening.

It is time to look into the eyes of that angel and feel the steadfast, compassionate inevitability of your own exposure.

They say that Justice is blind. And, you know, that blindness served a purpose. It sifted out what was no longer necessary; it weighed up a situation and guided you in a particular direction (you might not have had much choice about it). It also gave you the time to honour the path not taken. The blindfold denoted an unwillingness to be swayed by sentiment or subjectivity. Justice brought you to where you are now — at the feet of an angel. And she is not blind. She sees everything. She sees you, fully; and, through the reflection of her eyes, you have a rare moment: to see more of yourself than you had heretofore thought possible.

To see more of yourself and to stand present in that knowledge, neither attacking your reflection nor turning away from it.

The eyes of an angel.

Imagine the power that is generated in that moment — an instant of recognition, the removal of what felt impenetrable. Simply because you realise that the way you’ve always seen something is not the only way to see it. What would our world be like if we acted as if nothing existed over the horizon? Now imagine what the world would be like if the choices you had were not limited to the ones you’ve made in the past.

Deciding to see differently is seldom enough to achieve different sight. Right now, though, the forces at work are such that a shift in perspective is within reach. You just need to get out of the way. No, you can’t put conditions on it. No, you cannot control it. No, you are not able to stipulate what you deem acceptable to see and what you’d prefer to remain concealed. No, there is no need to hide anymore.

The magic of an invisible world stands poised to reveal itself. It has only seemed like magic because it defied your sense of what was possible. Until now. Until now.