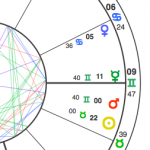 Note, chart below reflects corrected time. When Amtrak’s train 188 crashed last night, the planet Mercury was looming right on the horizon. This suggests that the cause of the crash is obvious, and that it would involve some kind of disregarded signal or rule, or misinformation, rather than a mechanical failure. The crash, in Philadelphia, […]

When Amtrak’s train 188 crashed last night, the planet Mercury was looming right on the horizon. This suggests that the cause of the crash is obvious, and that it would involve some kind of disregarded signal or rule, or misinformation, rather than a mechanical failure. 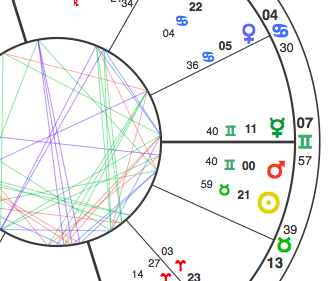 Mercury in this diagram is the green symbol right above the horizontal line. The line is the horizon, indicating that there was something in plain view that was ignored. But why did that happen?

The crash, in Philadelphia, killed at least seven people and injured more than 200, many of them critically. The train was headed from Washington to New York and had about 230 passengers on board.

Mercury is the planet associated with the transmission of information, and in its position at the time of the crash, some vital bit of data did not connect. The question is why, however. Because Mercury was (and remains) square Neptune, a planet associated with intoxicants, it’s likely that there will be a factor such as the train operator under the influence of drugs or alcohol.

Investigators have confirmed that the train was traveling at 106 miles per hour through a 50 mile per hour zone. While this might work in a car, trains are far less forgiving of the physics of speed. The mere act of going to faster than the speed limit in a train can result in a catastrophic incident.

It’s also possible that the train’s operator was texting or on the phone at the time of the incident, most likely with his wife or a close partner. And it may have been a combination of such factors.

Among those factors are Venus in the 8th house, indicating the involvement of a woman as the cause of the accident; Jupiter (signifying the conductor) conjunct Juno (indicating the presence of a spouse) and the Moon in Pisces in the 4th house, recently conjunct Neptune, describing communication but also the possible presence of intoxicants of some kind.

Mars, newly in Gemini, was also opposite Saturn in Sagittarius at the time of the crash. Besides the image of a collision between a fast object (Mars) and a solid object or regulation (Saturn), the opposition indicates recklessness, emphasizing the cause of the accident being some form of distraction, such as jabbering on the phone.

The New York Times reported that the train’s operator was not cooperating with authorities. There have been no reports of any unauthorized persons in the train’s cockpit. The operator, who has not been identified, was treated for injuries and released from the hospital. [Last night Chris Hayes of MSNBC reported that the train’s operator had given a blood sample and turned over his cell phone, but had not yet been interviewed by federal authorities investigating the crash.]

Robert Sumwalt, a member of the federal agency investing the crash, said during a news conference that the train was traveling 106 m.p.h. when the brakes were applied, The New York Times reported Wednesday. The engineer, he said, put the train into “emergency braking” just seconds before the crash.

The astrology indicates that this is a situation where information will emerge in layers, seemingly to no end. It will not be easy to pin definitive blame, as there appears to be both corporate and government responsibility for the incident, as well as whatever conduct the train’s operator may have contributed.

Train accidents are surprisingly commonplace, though rarely this deadly. Here is a list from Wikipedia of train crashes worldwide during the past five years. 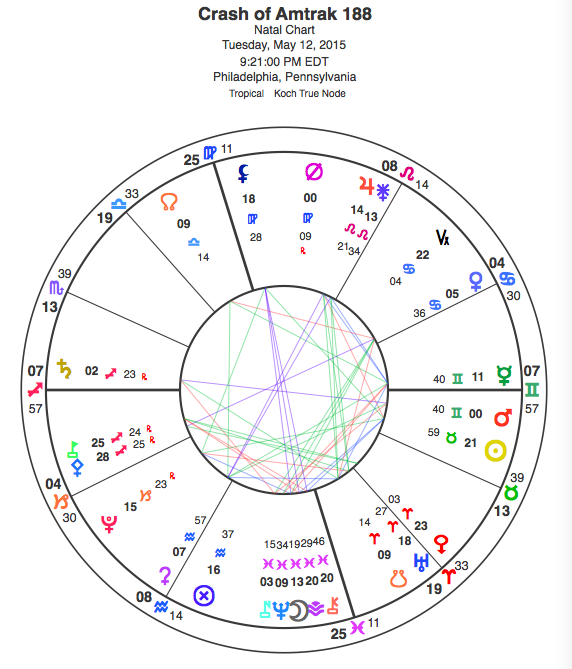 Corrected chart for crash of Train 188 — the actual time seems to have been 9:21 pm EDT.

21 thoughts on “Mercury on the Horizon: Blatant Signal, Missed or Ignored”