Good Monday morning to you. 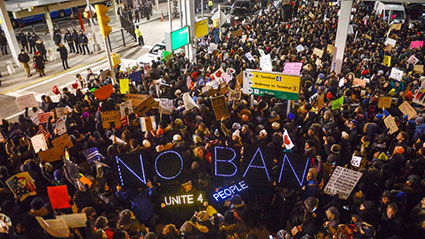 I suggested that when Mercury finally left its shadow phase, which it did this past Friday, and actually made that conjunction to Pluto, we would get a little squeak.

I described it on-air as buyer’s remorse, and in print as a moment of “what was everyone thinking?” which would manifest about nine days after the inauguration.

The symbolism is obvious: Mercury-Pluto looks like a rude awakening, at least in a mundane chart. Something would become obvious. Indeed it did.

On Friday, Donald Trump issued an executive order — one of many his first week in office — calling for a permanent ban on people entering the U.S. from Syria, and a 120-day ban and “extreme vetting” of anyone traveling from Iran, Iraq, Libya, Somalia, Sudan and Yemen. Though Trump said that this was not a “Muslim ban,” he said his move was intended to keep “radical Islamic terrorists out of the United States of America. We don’t want them here.”

He added that he did not want to admit to the country the kinds of threats that our soldiers were fighting overseas, including — get this — those who practice religious persecution or sexism.

The ban included people with approved visas, students, a visiting medical researcher with Harvard as his destination, American military contractors, children and permanent residents of the United States. It ignored the fact that Iraq is our ally in the war against the Islamic “state.”

Many noted that the refugee ban was issued on Holocaust Rememberance Day, something that would tickle readers of Breitbart News. 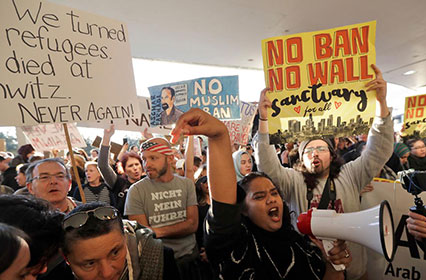 Protests on the West Coast took place in San Francisco (shown above), Los Angeles and Seattle-Tacoma airports, as well as in Denver and elsewhere.

Perhaps the move was best summed up by Pope Francis, who said, “It is hypocritical to call oneself a Christian and send away a refugee,” adding, “Jesus taught us who the good Christian is in the parable of the good Samaritan.”

The ban, however, did not include countries where Trump does business.

Public response was refreshingly swift and strong. By the end of the weekend, the administration was walking back parts of the ban, teaching activists that protests actually work. Highly energetic demonstrations rapidly emerged in airports around the country, starting at John F. Kennedy Airport in New York City, where several travelers were detained. As protests mounted, so too did lawsuits. By Saturday night, a federal court judge in Brooklyn reversed parts of the ban, as did federal judges in several other jurisdictions.

The executive order came under fire from prominent Democrats and Republicans, who pointed out that religious liberty is a bedrock of American society. The New York State Attorney General demanded a list of those detained. Sunday night, sixteen state attorneys general issued a collective statement calling the ban “unconstitutional, unamerican and unlawful.”

Even Dick Cheney spoke out against the policy. “I think this whole notion that somehow we can just say no more Muslims, just ban a whole religion, goes against everything we stand for and believe in. I mean, religious freedom has been a very important part of our history and where we came from,” Cheney said on a Monday appearance on the the Greg Hewett radio show. “A lot of people, my ancestors got here, because they were Puritans.”

Part of the problem is that Trump is claiming to solve a problem that does not exist. There have been no terrorist attacks on U.S. soil by foreign nationals from the banned countries since 1975. 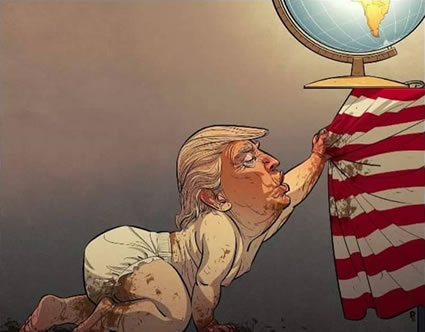 Though the executive order raises 9/11 in its introduction, countries from which 16 of the 20 alleged 9/11 attackers came, Saudi Arabia and UAE, were not included in the ban. In both the US and the UK, all recent shootings and terrorist incidents have been perpetrated by domestic actors.

Political grandstanding is one thing, though this is the kind that can send the world out of balance. Diplomatic gestures reverberate through the global community, which is in a delicate state at the moment. However, I reckon they are braced for the new normal, despite none of this being normal. It’s not helping that Trump commented last week how the U.S. should have kept the oil in Iraq and that maybe we would have a second chance.

Domestically, it’s turning out that Trump is the best thing to ever happen to the progressive moment. Last Saturday, Jan. 21, millions of women across the country and around the world marched for equality, with the biggest protests in DC and New York City. Then a week into his presidency, Trump provoked his first constitutional crisis — the numerous court decisions will have to be sorted out — and sparked another wave of enthusiastic protest at airports from coast to coast.

I’ll be back with more in Planet Waves FM on Tuesday. Your horoscope below is based on that Mercury-Pluto conjunction chart, with other factors included.

PS — I’m done writing The Book of Your Life. The projet is now in the hands of our editorial team. I’ll have a letter later in the morning describing the project, now that it’s finished. We should have it in your hands within a day or so. Thank you for your patience. — efc