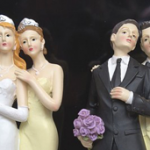 Let’s consider the marriage license as what it is, a contract. It’s a one-page document. But it’s a strange arrangement: a contract without terms. The actual commitments are not clearly stated on the document. There are no references to real things, places, responsibilities or actual, tangible obligations. Meditate on that phrase: a contract without terms. The whole thing is open to interpretation by lawyers, judges and even juries.

In an article posted shortly after the Supreme Court declared marriage a universal right, Mike Adams, editor of the Natural News conspiracy website, decried same-sex couples are “begging the government for a license to marry.” 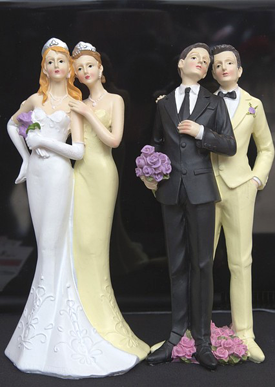 Should marriage be a renewable term contract?

He viewed the move toward same-sex marriage as more control by Big Brother. “While the gay community is wildly celebrating what they universally see as a victory, none of them are asking the far more important question: Why do we need government permission to get married in the first place?”

It’s a valid question, really, but Adams seemed to miss the deeper point, at least of the court’s action. The issues behind the struggle for same-sex marriage involved legal matters such as taxation, inheritance, adoption rights, hospital visitation and who makes decisions when one’s partner is incapacitated.

Those are the things that are, right or wrong, already regulated by the government, and one of the ways they’re regulated is through the marital contract. For those who want to use it, it can be a great tool — you get to look after your spouse in times of need. You can grant a foreign person citizenship to your own country. And it grants a diversity of tax breaks. Single people essentially pay a tax for not being married.

None of this is especially romantic. Yes, love is involved in these issues, though marriage is not about the right to candle-lit dinners, a spiritual ceremony or a big party with a band playing cover tunes and all your cousins and college friends attending.

“A far more meaningful victory would have achieved the elimination of all government control over marriage. The union of two consenting adults in marriage should never be a matter of government control in the first place,” Adams wrote.

He’s right, of course, but I wonder, as someone who seems to be arguing for a libertarian position, why we would set the limit at two consenting adults.

Putting that aside for a moment, let’s consider the marriage license as what it is, a contract. It’s a one-page document. It’s short and it’s sweet and you no longer need to take a blood test to prove you don’t have syphilis, in case you don’t like the phlebotomist.

But it’s a strange arrangement: it’s a contract without terms. The actual commitments are not clearly stated on the document. There are no references to real things, places, responsibilities or actual, tangible obligations. The whole point of a contract is that it makes the exchange clear; a valid contract stipulates who owes what to whom, and when. But that’s not true in a marital contract.

Meditate on that phrase: a contract without terms. The whole thing is open to interpretation by the partners involved, and by lawyers, arbitrators, mediators, judges and even juries.

How far this goes is ridiculous. What you may not realize is that when you sign the marriage contract, you’re signing approximately half of the law library; heck, you may be signing the whole place. Most people actually have no concept what they are agreeing to.

The marriage contract can become a factor in any aspect of litigation, starting with family court and its purview over children created in the marriage, issues with real estate, and scenarios extending into the highest levels of corporate finance, probate and even influencing criminal law.

Few people understand that the marriage license is a kind of universal legal elixir, applicable to anything, for any purpose.

In marriage, one signs away property rights, privacy rights and a diversity of rights over your person. For millennia it was understood that marriage was largely a man taking possession of a woman (symbolically present, to this day, in many women changing their last names to that of their husbands).

Your spouse can run up $15,000 in credit card debt or $1 million in gambling debt and you’re on the hook.

We have all seen the marriage contract used by people to control one’s partner, sometimes to the point of enslavement. A great many of us have experienced the not-so-pretty divorces of our parents. And many have personally experienced the incredible complications that arise as a result of this easy-in, difficult-out agreement.

It’s essentially a one-way device. Marriage vows do indeed have an exit clause: death. “Till death do us part” is the still-used last line of public wedding vows, as the bridesmaids swoon. That line is not printed on the written version of the contract, but we all know it’s there, lurking on the first invisible page below the actual document. I don’t know why people consider this romantic. To me it’s about as sexy as having a hearse as the last car in a wedding procession, as it drives from the church to the catering hall. Just as a little reminder, of course.

It is, I think, the death clause in the matrimony vow that results in all the drama. “Accept no compromise in which death plays a part,” A Course in Miracles advises its students. When you hear “till death do us part,” just imagine Don Corleone muttering, “I made him an offer he couldn’t refuse.”

I am calling for marriage reform. What we need is a renewable term contract. This should be structured with flexibility as its guiding principle, reflecting the values of the people involved — and acknowledging that people often change, previously hidden aspects of themselves emerge, and that people make mistakes.

What if the marriage contract recognized the most important thing about humanity — that people are individuals, no matter how society tries to smash them into a can, or how hard people try to fit themselves into a can?

What if marriage were structured as an agreement that expires in a year or two, or five, with the option to renew, if both parties agree? The contract should come with the option to choose the renewal term, as well as a “mistake” clause for the whole first year. In many states there are “cooling off” rules that allow you to get out of some contracts within three days of signing. I think the marital contract should include that.

And what if the various commitments of marriage were stated explicitly in the agreement? For example, not all people are sexually monogamous. Cheating is already an informal institution. What if we include sexual privileges in the contract?

Social privileges need to be enumerated as well, such as the right to have opposite-sex friends.

We might even want to include educational rights. I once counseled a young married woman whose husband would not allow her to go to community college. The obvious implication was that she might meet someone more education- and self-improvement oriented, perhaps unlike himself.

Love is, in theory, not anything we need permission for but the truth is that most people do need to be given permission to love, or to give themselves permission. Most people are struggling on some level to love themselves. All of us are involved in a self-discovery process. We are all works in progress. We never really know who we’re going to be tomorrow, and we’re often figuring out who we were yesterday.

Society’s most venerated form of relationship really needs to reflect these basic truths.

7 thoughts on “Marriage: Bring On the Renewable Term Contract”