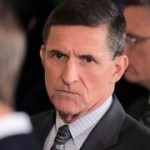 Just before news broke that President Trump’s former national security adviser Mike Flynn will plead guilty this morning to lying to the FBI, national security reporter Marcy Wheeler, who anticipated the news, said it could “dramatically change how Republicans face the Russian investigation.”

Is Trump Plan to Replace Rex Tillerson a Push for More U.S. Aggression Toward Iran, North Korea?
White House chief of staff John Kelly has reportedly developed a plan to push Secretary of State Rex Tillerson out of his post and replace him with CIA director Mike Pompeo. The New York Times reports President Trump would then appoint Republican Senator Tom Cotton to replace Pompeo at the CIA. Cotton has been a key ally of the president on national security matters. White House press secretary Sarah Huckabee Sanders denied the reports on Thursday. Marcy Wheeler is an independent journalist who covers national security and civil liberties at her website EmptyWheel.net. Her new piece is headlined, “Throwing H2O on the Pompeo to State Move.”

GOP Quietly Moves to Open Arctic Refuge to Oil & Gas Drilling While Earth Undergoes 6th Extinction
As the GOP tax bill heads to a potential vote today, a little known provision tucked into the Republican tax bill would open one of the world’s last pristine wildernesses—the Arctic National Wildlife Refuge—to oil and fracked gas drilling. The amendment was added during negotiations to win votes for the larger tax bill. The Arctic Refuge is rich in biodiversity and home to caribou, polar bears and musk oxen. It has also been home to indigenous people for thousands of years. Activist and photographer Subhankar Banerjee is Lannan Chair and professor of art and ecology at the University of New Mexico.

New Investigation Finds U.S. Special Forces Massacred Somali Civilians & Orchestrated a Cover-Up
The Pentagon is on the defensive after a new investigation revealed evidence that U.S. special operations forces massacred civilians in Somalia earlier this year, allegedly firing on unarmed farmers and their families, then planting weapons beside the bodies to appear as though the people were armed members of al-Shabab. On Wednesday they released a statement that said, “After a thorough assessment of the Somali National Army-led operation near Bariire, Somalia, on Aug. 25, 2017 and the associated allegations of civilian casualties, U.S. Special Operations Command Africa has concluded that the only casualties were those of armed enemy combatants.” This came after The Daily Beast published an investigation Wednesday on the operation and its aftermath and reported what eyewitnesses have said since the attack—the victims were farmers, and they were killed by American soldiers. All of this comes as the U.S. recently revealed it has some 500 troops in Somalia, up from a reported 50 earlier this year. Christina Goldbaum is an independent journalist based in Mogadishu, Somalia. Her new article for The Daily Beast is the investigation headlined, “Strong Evidence that U.S. Special Operations Forces Massacred Civilians in Somalia.”

Cities Across the U.S. Join Movement to Impeach President Trump For Violating the Constitution
In November, a half-dozen Democrats introduced articles of impeachment against Trump, accusing him of obstruction of justice and other offenses. This comes as a petition for impeachment launched in October by Democratic donor Tom Steyer now has more than 3 million supporters. At least 17 communities around the country are now on record calling for impeachment proceedings against Trump. On Tuesday, the town of Weston, Massachusetts joined the list when residents supported a citizen petition asking the House to assess whether Trump is violating the Constitution. Constitutional attorney John Bonifaz is co-founder and director of Free Speech for People.