We have just experienced two notable peaks of energy: the Capricorn Full Moon, and the conjunction of Venus and Jupiter in Leo (which you can see with your own eyes in the sky at dusk). Both were exact yesterday, July 1, but the energy is still rippling out — and that energy is feeding into a third aspect: Mercury square Chiron, which is prompting you to make a decision.

By the time you read this, we will have just experienced two notable peaks of energy: the Capricorn Full Moon, and the conjunction of Venus and Jupiter in Leo (which you can see with your own eyes in the sky at dusk). Both were exact yesterday, July 1, but the energy is still rippling out — and that energy is feeding into a third aspect: one that is prompting you to make a decision. 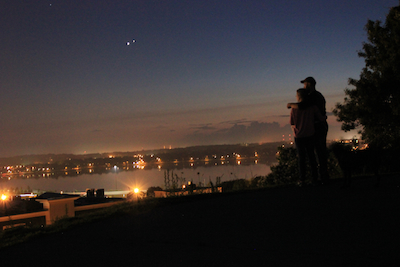 Viewing the Venus-Jupiter conjunction over Back Cove, Portland, Maine, on July 1, 2015. Photo by Amanda Painter.

First, though, the Venus-Jupiter conjunction is a story with legs. Venus is gearing up to retrograde in a few weeks, which means that, by the time it is done with that process, it will have conjoined Jupiter a total of three times.

Venus conjunct Jupiter is generally viewed as a very fortunate, beauty-filled and ‘lucky’ aspect — though as with all things Jupiter is involved with, you can expect to have to provide your own follow-through to capitalize on the mojo.

This week, with the first conjunction still in effect, it’s a good time to put yourself out there in the public sphere. Don’t be shy about showing what you’re worth.

With the second conjunction on Aug. 4 (also in Leo), when Venus is retrograde, you might encounter something that feels like a reversal, a step backwards or some other form of reconsideration connected to what you’ve put into motion. Don’t’ despair. The boat has not sailed without you; you’re just getting an opportunity to see where you need to shore up your efforts, redirect them, or otherwise align better with your highest values.

Then on Oct. 25, the third Venus-Jupiter conjunction occurs in mutable, earthy, detail-oriented Virgo. Chances are this is when you can systematically build upon, develop or begin manifesting what you’re starting now. Watch this space for more details as each of the second two conjunctions approaches. For now, you have a decision to make.

That decision is being prompted (or represented) by Mercury, the planet of your mind, square Chiron — a minor planet (centaur) tasked with getting your attention on matters you need to learn from and heal. That might sound daunting, but it needn’t be. Chances are, you’re already most of the way there on whatever issue the Mercury-Chiron square represents.

You see, Mercury is still in Gemini, the sign where it was recently retrograde. With the exception of an opposition to a notable asteroid earlier this week, Mercury’s square to Chiron in Pisces, exact Friday at 11:06 am EDT (15:06 UTC), is its first significant ‘hard’ aspect since it left the post-retrograde shadow phase on June 28.

To me, this looks like an ‘a-ha’ moment related to making a decision about your healing process — a decision that’s informed by insights or questions you encountered during Mercury’s recent retrograde process. Or, as Eric described it in his latest episode of Planet Waves TV, the tension of Mercury square Chiron not only represents a decision you need to make, but also the need to express something.

Now, you might not feel up for that, especially if you think you have an especially serious question weighing you down. But consider the possibility that maybe you only think you’re not up for it — but really you are. That’s a common trait of aspects between Mercury and Chiron; sometimes they trigger old wounds to our psyche. It can be hard to see past that, to the truth of our present capabilities.

Yet a common trait of squares is that once you take some decisive action, you release all that bound-up energy that felt like pressure. And voila: you feel like you have some wiggle room, like you’ve put something in motion that actually moves you forward.

This week, when you put it all together — an ‘a-ha’ moment; a question or decision; expressing what you’ve decided or just asking the question; putting yourself out there in some form of the public sphere, even if you’re not sure you’re up for it — you’re stepping into a flow involving even more planets and aspects than I’ve mentioned here. The cosmos has your back, if you’re willing to take the step; and if you remember that results might look different from how you’d imagined.

We offer so much of our material free of charge on this site as a gift: a gift in the Art of Service, to assist your personal healing journey — including the healing of your sexuality and your relationships, and all other facets of life. We offer this on the foundation of our for-pay services.

There are several ways you can support this mission; ways you can ensure that Planet Waves continues to provide the safe haven it does for all manner of exploration and healing, a respite from the incessant media and advertising assaults on self-esteem and authentic relating. One of the most important and sustainable ways is through a Core Community membership.

12 thoughts on “Make the Decision and Step Into the Flow”