Amanda Painter offers a grab bag of three items for today’s sex-and-relationships offering. The Sun (with planetary company) offers the linking themes, which include playfulness, risk-taking, courage, the animal world, and submission/passion as seen in the traditional Strength tarot card.

I’ve decided to offer you a grab bag of sorts for today’s sex-and-relationships offering. After all, the Sun is in Leo along with Mercury, Jupiter and retrograde Venus, emphasizing several of this sign’s traits, including playfulness, risk-taking, courage and the animal world. 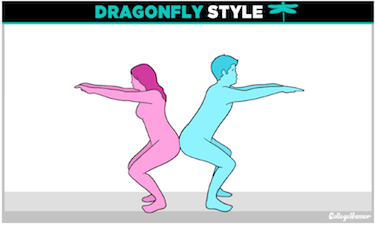 If you think of Doggy Style when you’re feeling wild, you ain’t seen nothin’ yet… Image by College Humor

The traditional Strength card from tarot also comes to mind, featuring as it does a lion submitting to a maiden.

First up, bringing in the theme of animals and playfulness (and some risk, depending on the species — and depending whether you consider making babies to be a ‘risk’) is this series of GIFs by Mike Trapp at College Humor, imagining what it might look like if humans had sex like various animal species.

Since the first animated image, of praying mantis sex, is predictably…ahem…rough on the male, the link above takes you to one of the middle slides. Use the left and right arrows to the side of the image to see the others. Oh, and apologies for the hetero-normativity of the animations, done in the classic pink-and-blue line drawings of sex manuals. Technically earthworms are hermaphrodites that fertilize each other simultaneously, but the artist kept the pink and blue distinctions.

Next up, sticking with the ‘play’ and ‘risk’ themes and adding in some courage: men’s coach Mike Hrotoski’s blog post about creating a game wherein you say “Fuck [X]” about whatever you’re mad about, until you have no more fucks to give, and have opened up some space within where your now-purged anger used to be.

The risk? If you play with a partner, or in a public forum such as social media, you certainly might stir up some ‘stuff’. But if you remember that the goal is clearing, not taking on more ‘stuff’ (such as guilt), space might open in a relationship, too.

Hrotoski (whose blurb in his website’s banner may be a smidge off-putting to the very perceptive) certainly took a risk on the playful side of ‘edgy’ with the piece’s title: Fuck You Spiritual People For Using Gratitude As A Bypass To Your Anger.

Feeling feisty yet? Ready to play the game and roar out all your “Fucks!”?

If not, here’s item number three, where we get a reminder of the courage it takes to truly surrender to sexual healing and to let it unfold however it will, and of the strength present in those who hold the space for others to enter into the process. Recently Sarah Taylor posted this video clip to her Facebook page, from a documentary called The Sacred Prostitute.

In this particular clip, a sacred prostitute named Nut Tmu-Ankh Butterfly explains how, if you go to her, you are not buying a sexual experience. Rather, you are there to allow yourself to surrender to sexual healing — that no sexual healing can occur without surrender.

Expectations about what will or will not happen will not help you. It’s all about being the lion: open jaws, open heart, open vessel through which love and healing may unfold along with the orgasm’s roar, held in space and held in spirit.

2 thoughts on “Leo Love: Animals, Games and Strength in Surrender”