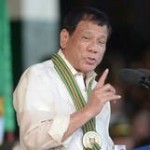 In the Philippines, President Rodrigo Duterte has suggested he might impose martial law across the country, after declaring it this week in his native island of Mindanao. This comes as a transcript of the call of Trump praising Duterte for his controversial drug war was leaked and published by The Intercept.

Jeremy Scahill on Trump’s Embrace of Duterte’s Deadly War on Drugs in the Philippines
In the Philippines, President Rodrigo Duterte has suggested he might impose martial law across the country, after declaring it this week in his native island of Mindanao. This comes as a transcript of the call of Trump praising Duterte for his controversial drug war was leaked and published by The Intercept. According to the leaked transcript, Trump said, “I just wanted to congratulate you because I am hearing of the unbelievable job on the drug problem. Many countries have the problem, we have a problem, but what a great job you are doing, and I just wanted to call and tell you that.” Duterte’s bloody war on drugs has led to the deaths of nearly 9,000 people, most of whom are poor. Human rights groups have blasted Duterte for the way he’s waged his anti-drug campaign, defined by extrajudicial killings of thousands of suspected drug dealers and users.

Scahill & Greenwald: What If All Victims of War Received the Media Attention of Manchester Victims?
In Britain, police are expanding their investigation into Monday’s suicide bombing in Manchester that killed 22 and left dozens injured. Many of those killed were young girls. While the Manchester story has dominated international headlines, far less attention has been paid to other stories this week involving the deaths of civilians. In Syria and Iraq, U.S.-led or backed airstrikes have killed dozens of civilians in the last week alone. Meanwhile, in Yemen, the human rights group Reprieve says U.S. Navy SEALs killed five civilians during a raid Tuesday night on a village in Ma’rib governorate.

Jeremy Scahill & Glenn Greenwald: Criminalizing WikiLeaks is a Threat to Journalists Everywhere
Swedish prosecutors recently dropped the investigation into allegations of sexual misconduct by WikiLeaks founder Julian Assange. Assange has always denied the allegations, which he calls a pretext for his ultimate extradition to the U.S. to face prosecution under the Espionage Act. Since 2012, Assange has taken refuge in the Ecuadorean Embassy in London. It’s not clear whether he will emerge any time soon. Last month, U.S. Attorney General Jeff Sessions confirmed that the U.S. has prepared a warrant for Assange, calling his arrest a “priority.”

Journalist Desmond Cole on How the Toronto Star Tried to Silence His Activism for Black Liberation
Last month in Toronto, journalist Desmond Cole was told by his editor at the Toronto Star that he had violated the newspaper’s rules on journalism and activism, after Cole protested a Toronto Police Services Board meeting. In his writings, Cole has long criticized the controversial police practice of carding—stopping, interrogating and collecting data on individuals without probable cause, a practice which disproportionately targets people of color in Canada. In 2015, he wrote a widely read piece for Toronto Life titled “The Skin I’m In: I’ve been interrogated by police more than 50 times—all because I’m black.” Desmond Cole is former columnist for the Toronto Star and now a freelance journalist, activist and radio host on Newstalk 1010.