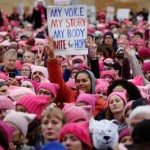 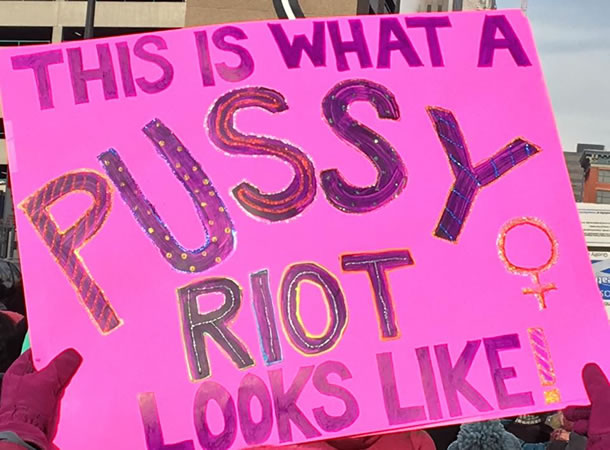 A personal favorite — this one really captured the spirit of the moment.

Yes, there were countless remarkable things about the Women’s March on Washington last weekend. 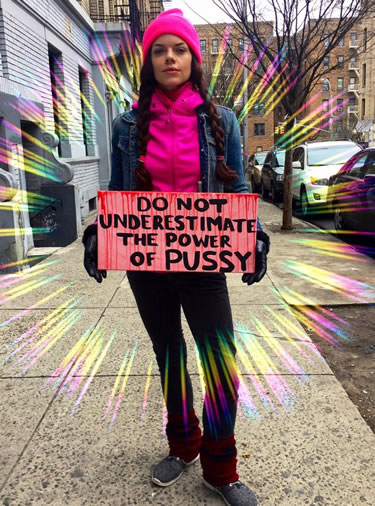 A particularly powerful and artistic declaration.

However, less discussed but just as evident of a turning point is this: the word “pussy” has been reclaimed by women, many of whom, a few months ago, might have hesitated to utter those syllables unless they were reading out loud a children’s book from the 1950s (and probably would have cringed a little internally even then.)

Back in October, The Washington Post released a recording of a 2005 conversation in which Donald Trump can be heard bragging that “when you’re a star, [women] let you do anything,” even “grab ‘em by the pussy.” The leak poised an interesting dilemma for news organizations, most of whom had never had to make decisions about where to put the asterisks when censoring that particular word.

But outraged citizens around the country had no problem catching on to exactly what was said, and the casual reference to sexual assault that it implied.

The next month, as we all know, Trump won the election, despite this and many other events and statements which in a more sane time would have led to his unequivocal defeat. It’s a wake-up call for almost all of us, and it remains to be seen whether the crowd that showed up in the streets on Saturday continues to take action. But there is something striking about the fact that any woman, man and child who participated in a march or even watched one on the news has now been inundated with the word “pussy” — in a context clearly not referring to a cute, cuddly pet.

At the March, posters using the word were everywhere. “Pussy Grabs Back!” — a direct play on Trump’s vulgar statement — was probably the most common (as well as a favorite chant of protesters), but there were also countless other creative and poetic declarations. Some examples included: 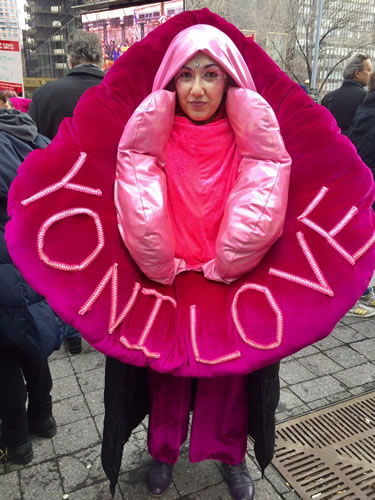 Jennifer Taves, pictured, defined the word “yoni” for curious onlookers at the New York March as “The Spirit Pussy.”

Additionally, dozens of unique vulva costumes dotted the Washington Mall and the streets of cities around the world — and plenty of other words describing female genitalia made appearances on signs, t-shirts, and banners.

The most common utterance of the P word, though, occurred through the seemingly-innocuous PussyHat Project. Originated by two women in Los Angeles who had recently taken up the hobby of knitting, the project aimed to create a stronger voice and sense of unity for marchers, while also giving those unable to attend a march a chance to contribute.

The website offers a simple knitting pattern for a hat with a rectangular top, which takes on the appearance of cat ears once it’s placed on someone’s head. The instructions request that hats be sewn in pink yarn.

The PussyHat project went global before the March, and overwhelmingly succeeded in creating what looked and felt like an ocean of pink hats on the Mall. It also made the word “pussy” even more impossible to avoid hearing, seeing and speaking.

I commented on the abundant use of the word to one of the women I was walking with as we joined the throngs headed towards the Capitol Building on Saturday morning. “Yeah, it’s definitely a silver lining,” she said. “I’ve never liked that word before, but now it’s, like, empowering.”

The same woman later told me that her friend’s Republican mother had surprised their group with a bag of PussyHats before the March which she’d knitted herself.

“She was totally silent during the whole election. This was her way of showing solidarity,” she told me. 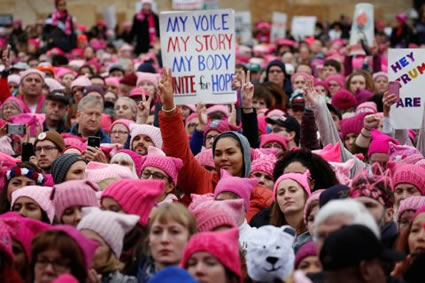 The PussyHat project turned the Washington Mall into an ocean of pink.

Particularly noteworthy to me is the fact that the Women’s March, and the majority of the people carrying signs and otherwise demonstrating a congenial relationship with “pussy,” qualify as “mainstream.”

As part of a community with a generally open-minded and reverent attitude towards sexuality, the word is more commonplace in my world than in your average American woman’s. (Though it’s not a personal favorite, I’ve definitely become more comfortable with it over time, and no longer consider it a purely derogatory term.)

But a day of seeing it and hearing everywhere felt revolutionary to me, and symbolic of a shift in female consciousness that goes much deeper than some clever wordplay. It’s as if “pussy” has crawled up and out of the societal caves of pornography and men’s locker rooms and is showing its face without fear.

Astrologically, the Women’s March on Washington looked to me like the moment before a birth, when the coming of the baby is eminent but the color of its eyes and the shape of its nose are yet to be seen. In the immediate aftermath, I can’t help but feel like this baby looks like a beautiful interplay between the two things the word “pussy” represents: it’s pink, it’s powerful, and its teeth are sharp.

And it has a message for President Trump:

NEVER underestimate the power of pussy.

One thought on “It’s official: Pussy has gone mainstream”