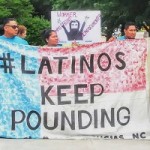 Around the world, millions of workers took to the streets Monday for May Day, also known as International Workers’ Day. In the United States, the marches were led by immigrant workers and their allies, drawing comparisons to the massive May Day 2006 marches when millions of immigrants protested nationwide.

Immigrant Workers Lead Thousands in NYC May Day Protests: “Without Our Labor, the City Cannot Move”
Around the world, millions of workers took to the streets Monday for May Day, also known as International Workers’ Day. In the United States, the marches were led by immigrant workers and their allies, drawing comparisons to the massive May Day 2006 marches when millions of immigrants protested nationwide. In California, tens of thousands of people marched in the Bay Area, as immigrant workers refused to go to work and students walked out of class. In Oakland, four activists were arrested after chaining themselves together to blockade the entrance to the Alameda County Administration Building. In Milwaukee, Wisconsin, more than 30,000 people marched to demand the governor fire Milwaukee County Sheriff Dave Clarke, block anti-immigrant legislation and return driver’s licenses to undocumented immigrants. At least 140 businesses were shut down across Milwaukee.

May Day Protests Held at NC State Capitol as GOP Lawmakers Push Bill Defunding “Sanctuary Cities”
In Raleigh, North Carolina, more than 100 people braved the rain to take part in a May Day rally outside the state Capitol to protest a series of proposed anti-worker and anti-immigrant bills. Last week, the Senate passed a bill to strip funding for any city that does not enforce federal immigration law.

ACLU Fight Persists in North Carolina: NCAA Basketball Has Returned, But Anti-Trans HB 2 Remains Law
In March, state Republican lawmakers in North Carolina struck a deal to overturn a law denying transgender people the use of the bathroom, changing room or locker room that matches their gender identity. But LGBTQ groups say the so-called repeal of HB 2, the “bathroom bill,” hasn’t ended the discrimination. The deal allows the state to continue regulating bathrooms while barring local governments from enacting their own anti-discrimination laws until late 2020.

Is North Carolina Still a Democracy? How Unfettered Conservative Rule Reshaped Tar Heel State
It has been nearly six months since voters in North Carolina elected Democrat Roy Cooper as governor. Republican lawmakers responded by waging what many described as a legislative coup to strip away much of Cooper’s power. Meanwhile, Republicans in North Carolina are attempting to solidify their legislative power by passing a series of new laws to restrict voting rights. This comes despite a report by the Electoral Integrity Project that determined that North Carolina’s democratic institutions are so flawed the state should no longer be considered a functioning democracy.

Chris Kromm: The South’s Political Clout Is Rising Under Trump
This segment looks at the increasing power of states in the South to shape national politics. Guest, Chris Kromm writes in his latest piece that Southern states gave 160 Electoral College votes to Trump, more than half of the 306 total he won. “Southern Republicans have emerged as key figures in the new administration and the GOP-controlled Congress, giving Southern states growing influence in shaping the nation’s political agenda,” Kromm writes. Many Republicans from the South have been confirmed in senior Cabinet positions, including South Carolina’s Mick Mulvaney as director of the Office of Management and Budget, Rick Perry from Texas as energy secretary, Alabama’s Jeff Sessions as attorney general and former Exxon CEO Rex Tillerson of Texas as secretary of state.